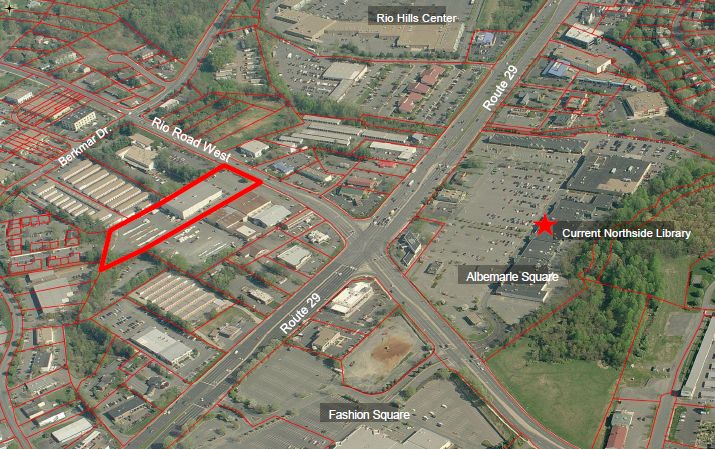 A new location for the Northside library became a reality Wednesday when the Albemarle  County Board of Supervisors voted to spend $11.8 million to purchase and redevelop a building on West Rio Road.

“After years and years of researching and trying to find a spot, and after exhausting all opportunities to improve the site where we are, … we have agreed to purchase this property,” said Supervisor Ann H. Mallek.

The county is currently paying $246,000 a year to rent a 15,000 square foot space in the Albemarle Square shopping center.  Charlottesville contributes $46,000 towards this location as part of a regional library agreement. The library’s lease expires in October 2014.

The county also rents space for general storage needs in the former Comdial building for around $200,000 a year.

“This will allow us to move our county stuff out of some of our prime light industrial property at Comdial and move it into the basement,” Mallek said.

In December, the county entered into an option to purchase 705 W. Rio Road from Martha Jefferson Hospital, which acquired the property in June 2011.

“The property was basically given [to Martha Jefferson] as a gift so that we could then sell it and use the proceeds of the sale for hospital needs,” said Jennifer Downs, spokeswoman for Martha Jefferson.

The firm Heyward Boyd Architects was hired to investigate the site and found no environmental hazards.  They also produced a concept for a redeveloped building incorporating more windows in order to provide natural light.

The funding for the purchase and redevelopment will come out of the county’s capital improvement program.  Henry said money currently being used to pay rent will instead be used to pay for debt service.

In late April, the Planning Commission recommended that the site would be consistent with the county’s Comprehensive Plan.

However, the president of the Free Enterprise Forum said that the existing location may be more consistent with the county’s Neighborhood Model.

“Currently the Northside Library is in a retail center with significant parking as well as other community facilities within reasonable walking distances such as a bakery, a number of restaurants, a movie theater, a private health club, as well as a new grocery store,” wrote Neil Williamson in an update on the Free Enterprise Forum’s website.

Staunton-based Heritage Hospitality Management had investigated the possibility of purchasing the site to build a Homewood Suites hotel.  The Architectural Review Board reviewed a preliminary site plan at its January 2012 meeting.

However, the company decided to move their project into the city of Charlottesville on land that formerly housed the Regal Seminole 4 movie theater. That project will be completed in the spring of 2014.

County Executive Thomas L. Foley said the county eventually would save money by redeveloping an existing building rather than constructing one from the ground up.

“This results in a large savings of what we expected to spend on the library,” Foley said.

Martha Jefferson also is selling an adjacent parcel Albemarle County decided would not be needed for the library project.

County staff has been directed to fast-track design development of the library so that it can be ready by the time the existing lease expires.