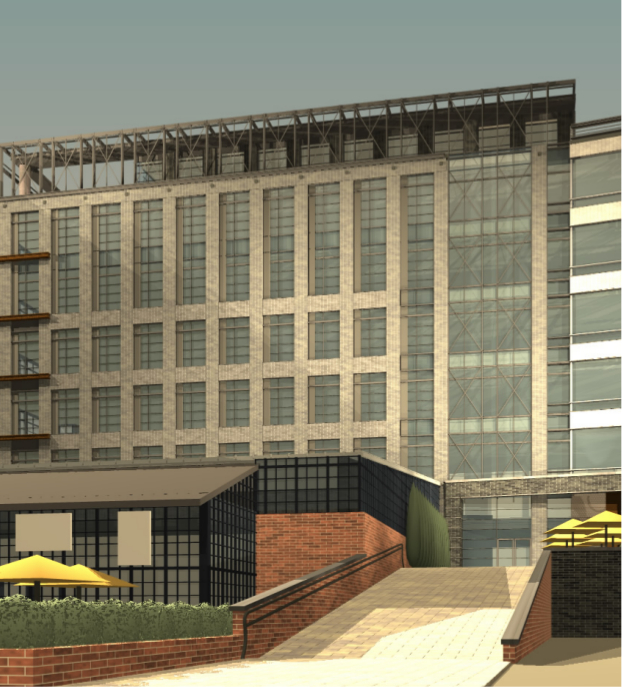 Rendering of the planned development, with Glass Building at left (Treehouse not pictured)

Developer Jay Blanton has announced plans for a 120,000-square-foot building at 323 Second St. SE, with five stories of office space over a four-story parking structure.

Kuttner previously attempted to develop the site as a mixed-use office and residential building with micro-apartments. Opposition to residences from the City Council and the surrounding neighborhood caused the project to be scrapped, but Blanton sees his development as more suited to the city’s needs.

“Oliver and I have been working together for a year to figure out exactly what would make the most sense with my objective to build first-class office space with a large floor plate,” Blanton said. “Both of us are very certain that this is something that would be fantastic for downtown Charlottesville.”

Blanton plans to purchase the land for the site from Kuttner, but the Glass Building and Treehouse will remain under Kuttner’s ownership. In facilitating the working relationship, Blanton requested Kuttner keep a minority interest in the office building.

“The vacancy [downtown] is between 1 and 3 percent, which means people can’t grow, they can’t move,” Pritzlaff said. “I think it’s a good opportunity for a lot of companies to really look into downtown Charlottesville that haven’t been able to come into the market.”

Plans for the site have been submitted to the city, with the commenting process ongoing. Blanton said the project can be constructed by-right, as zoning for the Downtown Extended Corridor allows mixed-use buildings to reach a maximum height of 101 feet. City neighborhood planner Brian Haluska confirmed that the site’s zoning does allow a nine-story mixed-use building by-right.

Blanton said he has focused on how the building will fit into the established character of the area. The building’s architect, Brian Bunce of BeachamBunce + Manley Architecture, explained the approach:

“There’s a proposed office project, and it all gets real when there are tenants that pre-commit to the building. That’s the process we’re in right now.”

“We began to take cues from the more industrial Glass Building language,” Bunce said. “We embraced this notion of extending the historic sub-district with the goal to realize [Blanton’s] vision of a uniquely modern, industrial, contextual building that would be all about Charlottesville. [Blanton] intuitively understands how a great city evolves and how important each new addition is to the skyline and local culture.”

According to Pritzlaff, the large office building will not encroach on the neighboring Treehouse building, which will house a mixture of office and retail spaces. The Treehouse has been a factor in planning access routes to the new development.

“The Treehouse building is unaffected by our development; it will remain as-is,” Pritzlaff said. “The entrance walkway for our building will walk directly between the Glass Building and the Treehouse.”

The Glass Building’s current parking lot will be converted into a public plaza with outdoor restaurant seating.

The four-story, poured-in-place concrete parking structure will include 200 spaces. Blanton planned this partially as a response to growing concerns about the availability of parking downtown.

“I’m contemplating leasing parking spaces to [tenants] on a monthly basis, and then after a certain time of day, the gates will open in the garage, and then anyone who wants to park there will be able to do so,” said Blanton. “After 6 p.m. every night, and all weekend long, the parking will be operated as a public utility.”

The office building itself will be a steel structure with no internal columns. This is meant to accommodate open-plan offices for large corporate tenants.

To the same end, optional open ceilings with exposed ductwork would allow each story to have a 13-foot-high ceiling.

“This building is being planned to work and accommodate a large user, and many large users are using an open plan,” Blanton said. “[In a large open space], with people sitting at modular systems, you need height in order for the space not to feel long, narrow and low-ceilinged.”

Blanton is hoping to obtain approval for the project and break ground in early 2017. Haluska said the timeline for final approval is dependent on the developer’s actions, and he indicated that the rounds of commentary have been in response to ongoing changes to the site plan.

Once the final plans are approved, Blanton anticipates construction taking 15 to 18 months. In the meantime, leasing negotiations have begun with large prospective tenants.

“Out of the gates, we’ll probably focus on tenants that are 6,000 to 120,000 square feet,” Pritzlaff said. “But once we get the first round of leasing done, we may have a floor that will be open for smaller tenants.”

Blanton indicated that these early conversations with prospective tenants are important in demonstrating demand for what the project has to offer.

“A project like this requires there be commitment from a certain [type] of tenant in order for it to go forward,” he said. “There’s a proposed office project, and it all gets real when there are tenants that pre-commit to the building. That’s the process we’re in right now.”