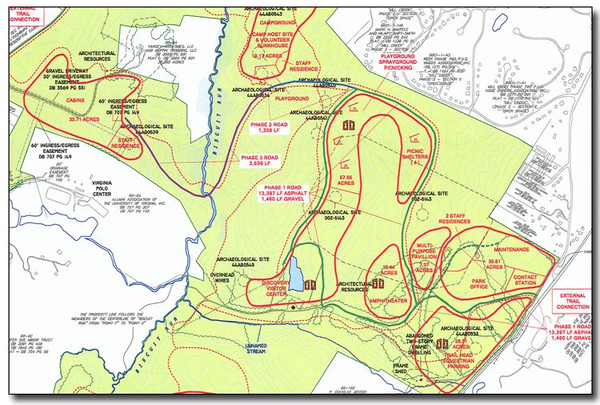 Property owned by Virginia for the proposed Biscuit Run State Park will remain off-limits to the public for the foreseeable future.

“We still own the land and it will continue to sit there vacant,” said Clyde Cristman, the director of the Virginia Department of Conservation and Recreation.

Gov. Terry McAuliffe had suggested the state use bond proceeds to pay the $42 million estimated to fully build-out the park. That cost comes from a 2013 master plan for the park’s development which envisioned three phases.

However, the Senate Finance Committee this week deleted the park and another land-banked park from SB731, the legislation authorizing a bond sale to pay for several parks and higher education projects across Virginia.

The Biscuit Run land was purchased by the state in December 2009 from a commercial developer who decided not to proceed with a mixed-use community.

Another new park, Widewater Park in Stafford County, also was removed from the bill. That land was purchased by the state in 2006.

“We’re very disappointed about that, but that is the budget process,” Cristman said

The Senate bill that passed only authorized the sale of $59 million worth of bonds, down from the $140 million requested by the governor.

The vote in the full Senate was 34-3 with three abstentions. Sen. Emmet W. Hanger, R-Mount Solon, the bill’s sponsor, sided with the majority. Sen. R. Creigh Deeds, D-Bath, voted against the bill.

The bill’s next destination is the House Appropriations Committee.

“I think we’re incredibly upset to see that the investments the commonwealth has made in the past are not going to be taken advantage of,” said Dan Holmes, director of state policy for the Piedmont Environmental Council.

“I expect it’s going to be a long time coming before we see the commonwealth talk [further] about it,” he added.

Cristman said it was too early to speculate about when funding for the park might be brought up again.