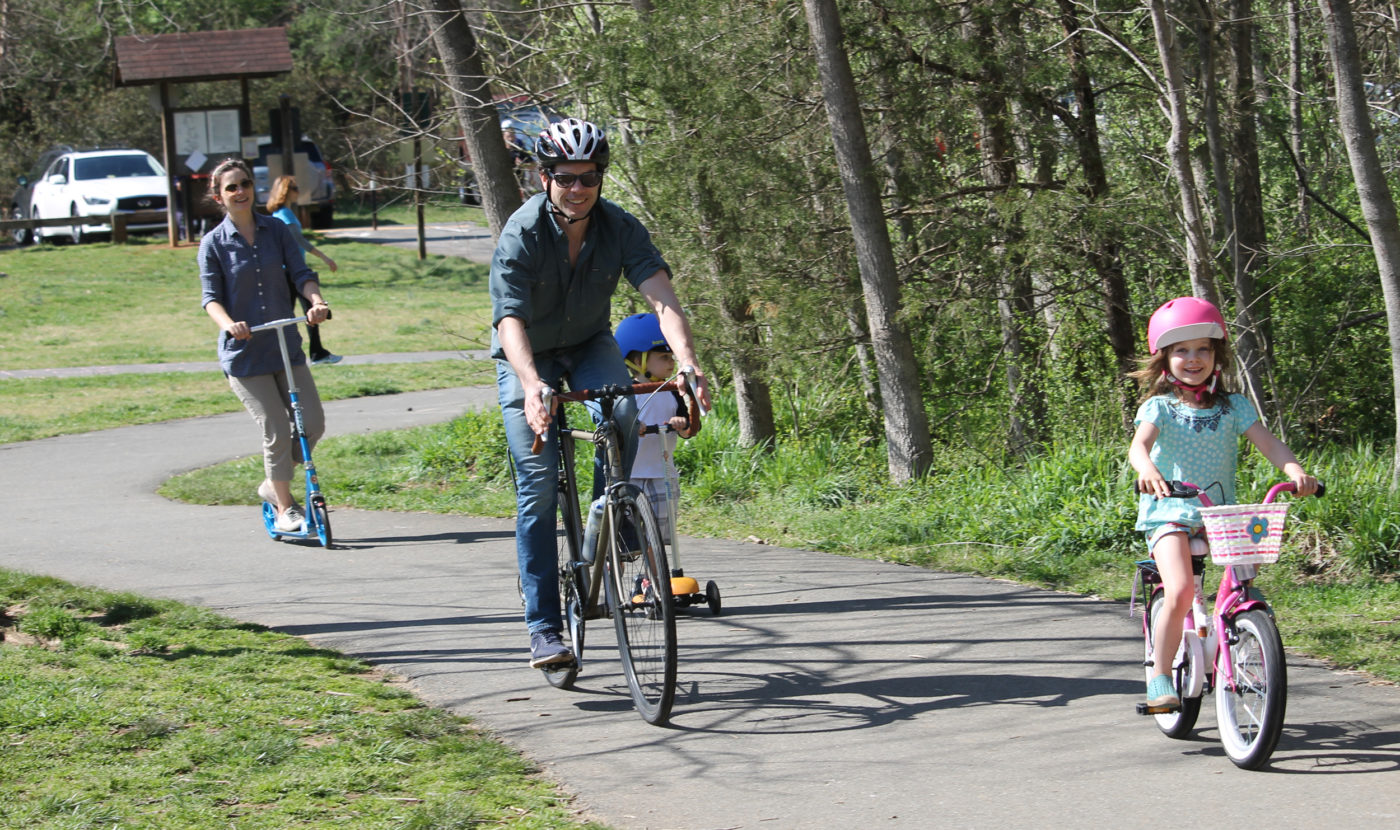 As the urban population of Albemarle County continues to increase and as new road projects are completed, some residents want a network of continuous trails that would allow for cycling from downtown to the Charlottesville Albemarle Airport.

“In a progressive town like Charlottesville, why isn’t there an option for people to bike and commute?” asked Greg Kastner, a University of Virginia graduate who spent several years in Washington before moving back to Charlottesville.

“A huge part of my life in D.C. was being able to bike to a lot of the places I needed to go for life and work and everything,” he said. “Then I came back to Charlottesville for a job on the U.S. 29 corridor. One of the things that is completely lacking is an ability to travel north and south in town on a bicycle.”

The lack of a unified trail system is not due to a lack of planning.

“We’ve just got to get it done,” said Will Cockrell, a transportation planner with the Thomas Jefferson Planning District Commission. “There’s been so much talk and it’s time for action.”

In November 2010, the Metropolitan Planning Organization, the regional government body that makes transportation-related decisions, adopted a plan called the Northtown Trail that would extend from Preston Avenue in the city to Lewis and Clark Drive north of the airport.

Former county Supervisor Dennis Rooker was a member of the MPO’s Policy Board at the time.

“This trail, if completed, would provide a wonderful and very significant recreational and transportation link for the city and county,” Rooker said.

The concept seems to be one that many in the community would support.

“We see a lot of families who would be interested in a multi-use path analogous to a rails-to-trails model that you see in other communities,” said Shawn Tevendale, the owner of Blue Ridge Cyclery. The company has locations on Preston Avenue and the Hollymead Town Center in northern Albemarle.

“If you could take the Riverview Park model with the paved back-and-forth trail and have something like that up in this direction, it would be very well received by the community,” Tevendale said.

However, one local official acknowledges that implementation has not kept up with planning.

“Much of the existing system was built at a time when bicycling and pedestrian concerns were not recognized as integral as they are today,” said Kevin McDermott, Albemarle’s transportation planner.

“Furthermore, the county went from being predominantly rural to urbanizing very rapidly,” he said.

The idea behind the Northtown Trail was that it would be constructed in phases as new transportation infrastructure was created.

“Recognition of the Northtown Trail has helped inform the design for facilities previously constructed, such as the John Warner Parkway and Lewis and Clark Drive,” McDermott said, adding that multi-use pathways are being built as part of Berkmar Drive Extended and the widening of U.S. 29 north of Polo Grounds Road.

“The county is also pursuing greenway connections along the South Fork of the Rivanna River near U.S. 29,” he said.

Cockrell said the concept is still an active and relevant plan but there are many competing priorities in the community.

“A lot of effort went into it and it has good conclusions, but to implement any plan you really need to make sure that everyone is aware of it …,” Cockrell said.

In the city, the Rivanna Water & Sewer Authority recently completed sewer pipeline work along the Schenks Greenway along McIntire Road. The John W. Warner Parkway’s grade-separated interchange provided a way for pedestrians and cyclists to travel north along the multi-use path from the city into Albemarle County.

The Northtown Trail calls for the continuous path to proceed north through the Belvedere neighborhood, where a multi-use trail was constructed as part of the neighborhood.

“This multi-use path links to a shared roadway facility on Free State Road crossing the Free State railroad bridge and connecting with Huntington Road,” reads a section of the Northtown Trail plan.

Rooker said another option would be for the trail to continue north through Belvedere along easements currently used by the Rivanna Trail Foundation.

“There were, and I still believe are, plans to have a pathway along the western side of Belvedere that would ultimately run back to the river,” Rooker said. “The river crossing is an expensive and important missing link.”

If the river could be crossed, Rooker said the Brookhill development has provided for a pedestrian tunnel underneath Polo Grounds Road that would connect the future community’s path system to the greater network.

“There are a lot of missing links, and getting good signage and awareness about the trail would be pretty key.”

“Obviously, to get to the airport, there would need to be a crossing of U.S. 29,” Rooker said.

McDermott said the grade-separated intersection at 29 and Rio Road provides one safe way to cross the highway. A small-area plan now underway will help further clarify how bikes and pedestrians will get around in the future.

Much of the Northtown Trail would run through Albemarle Supervisor Brad Sheffield’s Rio District. He said there has not been much progress to turn the trail’s concept into reality.

“The idea is great, but we still struggle with getting the micro connections to the residential areas first,” Sheffield said.

Some neighborhoods are resistant to allowing trails to connect through their communities. Last year, residents of the Forest Lakes neighborhood successfully lobbied against a parking lot at the northern end of the Brookhill community that would serve as an entrance to new trails there.

If the Northtown Trail were to instead follow along West Rio Road, the construction of the grade-separated interchange has created a safer way to cross U.S. 29 for pedestrians and cyclists, but more connections are needed.

“There are a lot of missing links, and getting good signage and awareness about the trail would be pretty key,” Kastner said.

McDermott said the county’s policy is to fill the gaps where it can.

“Many times we rely on the developer to construct sidewalk along with a project if it doesn’t exist already or improvements are needed,” he said. “For larger developments, we often look for broad network development under the neighborhood model. We also look for additional right-of-way from developers to accommodate future multi-use paths.”

Tevendale said the community is ready for results. He said there are people who do commute from northern Albemarle to Charlottesville, and some of his employees ride their bikes to his Hollymead location from the city.

“They have to get pretty creative as far as using some of the sidewalks on the side of U.S. 29 and some of the dirt, gravel roads,” Tevendale said.

From idea to reality

Sheffield said he believes the Northtown Trail plan is feasible but it will take work.

“I think the only obstacle is a well-developed concept and plan with buy-in from all stakeholders, such as [the Virginia Department of Transportation],” Sheffield said. “With the lack of vision, there is no concept of cost. With no cost, there is no push for implementation.”

For instance, there is no mention of the Northtown Trail in the city’s bike and pedestrian master plan, and the county does not yet have a similar planning document.

But McDermott said the trail is included in the county’s Places29 Master Plan, greenways plan and the Comprehensive Plan.

Cockrell said the Northtown Trail may gain steam as the TJPDC begins to take a fresh look at the Jefferson Area Bike Pedestrian Plan, a document that hasn’t been updated since 2005.

“While we might develop new recommendations, I think the bigger task will be to sift through all of the existing plans and recommendations and identify which ones are still valid,” Cockrell said.

The streamlining is necessary in an era of limited state funds for transportation projects and a time of uncertainty about federal policy changes that might occur. In Virginia, projects now go through a prioritization process known as Smart Scale, in which localities submit candidates for ranking.

McDermott said the county would welcome partnerships with nonprofits to help brand and create signage for the trail network.

For instance, a public-private partnership could be created to actually oversee implementation of the Northtown Trail or something that might evolve from its discussion. Cockrell suggested Boy Scouts could work to build bridges and develop other infrastructure.

Kastner said he wants planning to result in action.

“A clean and well-established route would be the ideal,” Kastner said. “I expect that this is something that we should be yearning for, and I haven’t seen that.”