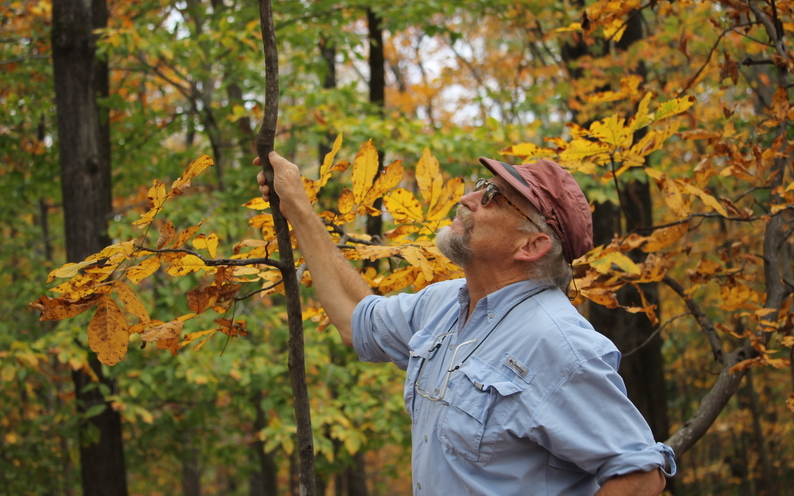 Just outside of Charlottesville, an ancient forest is glowing with the gold autumn colors of hickory leaves.

Hedgerow, a 340-acre wooded property near the Interstate 64-U.S. 29 interchange, is adjacent to the city of Charlottesville’s Ragged Mountain Natural Area. The late conservationist Jane Heyward donated the land to the Nature Conservancy in 2006. Albemarle County acquired it in 2015 to establish a multi-use trail park.

The future park at Hedgerow has not yet been given an official name. And like most of the planned parks in Albemarle, it’s not clear when it will be open for public use.

“There are greater priorities that the county needs to provide funding for,” said Albemarle’s parks and recreation director, Bob Crickenberger. “It’s just really difficult at this point to expand … but we’ll get there one day.”

Even when land is donated, creating and maintaining a public park represents a significant expense. The county estimates it will need $450,000 to develop Hedgerow, with an annual operating cost of $65,000. The county already is spending about $1.3 million on park maintenance this fiscal year.

Both Byrom and Preddy Creek include trails for running, mountain biking and horse riding. The Hedgerow park also will accommodate these activities. “It was always [Heyward’s] vision to donate this property for these purposes,” Crickenberger said. “Hopefully, it will come true.”

Dan Mahon, Albemarle’s outdoor recreation supervisor, said Hedgerow contains more panoramic viewpoints than any of the county’s current parks. He said the county would work with the city of Charlottesville and the University of Virginia to coordinate the uses and amenities of Hedgerow and the Ragged Mountain Natural Area.

Mahon said he also hopes the park at Hedgerow will educate residents about the property’s unusual history. Edgar Allan Poe’s short story “A Tale of the Ragged Mountains,” published in 1844, is said to have been inspired by his encounters with squatters on the land. “Hopefully, people will come away knowing a little about the origins of this place,” Mahon said.

“We’ve been very fortunate to have very generous donors over many decades. Now it’s the obligation of citizens to get the funding in order.”

The county plans to open another park just four miles south of Hedgerow on U.S. 29. The 410-acre William S.D. Woods Natural Heritage Area will be maintained as a nature preserve to protect rare plant species on Dudley Mountain. While a management policy for the park has not yet been finalized, it is unlikely to allow jogging, biking, or dog-walking.

County staff initially recommended passing on Montgomery “Bird” Woods and Jose V. Lambert’s offer to donate their Arrowhead Farm property in 2013 when it was unclear if resources were available to maintain the park.

Ultimately, the Board of Supervisors decided preserving the pristine forest would be worth the expense. “We’ve been very fortunate to have very generous donors over many decades,” said Supervisor Ann H. Mallek. “Now it’s the obligation of citizens to get the funding in order.”

Mallek and fellow Supervisor Liz Palmer said the public could accelerate the development of new parks by voicing support for these initiatives during the county’s budgeting process — and by donating money.

The Rockfish Wildlife Sanctuary has helped the county maintain the future William S. Woods Natural Heritage Area, and is releasing rehabilitated wild animals on the property.

Crickenberger said organizations such as the Charlottesville Area Mountain Biking Club have helped reduce the cost of developing and maintaining new trail parks by contributing many hours of volunteer labor.

“Despite the fact that resources are limited … we still need to continue building for the future,” he said. “Even though these [properties] are currently undeveloped, we have them banked, and we’ll be ready to go when funding is available.”

The opening of the 1,200-acre Biscuit Run State Park south of Charlottesville has been delayed by a lack of state funding.

“Budget amendment requests have not been successful to date,” said Virginia Department of Conservation and Recreation spokeswoman Shannon Johnson.

Johnson said department staffers are working with Habitat for Humanity of Greater Charlottesville to develop a trailhead access point for mountain biking and hiking near the Southwood Mobile Home Park.

The county has prioritized funding for planned parks and facilities that create new opportunities for water recreation. Improving boat access to the Rivanna River, the South Fork Rivanna Reservoir and the James River is a goal stated in Albemarle’s Comprehensive Plan.

“A lot of stakeholders are trying to promote and preserve the Rivanna,” Crickenberger said. “Managed public access is a huge need.”

The Board of Supervisors voted recently to accept a donation of a 122-acre parcel on Buck Island Creek from landowner Tom Dingledine and the Nature Conservancy. The park, which will be accessible from the Thomas Jefferson Parkway, will feature areas for boating and fishing on the Rivanna River near Fluvanna County. It will include five miles of family-friendly trails on gently sloped terrain.

Crickenberger said the estimated cost of developing the Buck Island park is $300,000, and that the annual operating cost could range from $60,000 to $80,000. The county’s parks and recreation department likely would need to hire a new staff member to manage the parks at Buck Island and Hedgerow.

“We need more park employees to get the parks open and manage them,” Palmer said. “We can’t rely entirely on volunteer labor to do that. The parks staff is very stretched.”

Darden Towe Park is currently the only county park with access to the Rivanna. The county is in the process of enhancing the public access point four miles downriver at Milton Landing, which the Virginia Department of Game and Inland Fisheries has deemed to be of poor quality.

“The pull-out at Milton was really awful,” Mallek said. “You had to climb up a 20-foot bank, dragging your kayak behind you.”

Mahon said the county has acquired nearby land to make the Milton launch easier to use and maintain. Parks staffers also are looking into the possibility of adding a new put-in location near the new Berkmar Drive bridge over the South Fork of the Rivanna.

Thirty-eight acres within Crozet’s Old Trail neighborhood have been reserved for a county park. The land, already being used heavily by recreational soccer teams, includes trails that follow Lickinghole Creek. The county currently is revisiting the intended uses for the park as Crozet residents plan for the community’s future growth.

Rivanna Village, a planned development in Keswick, will include a 32-acre county park with trails, picnic shelters, tennis and basketball courts and a dog park. Crickenberger said these parks alone would not be enough to meet the county’s ongoing need for more athletic fields. “This is a very active, athletic community, and there are a lot of people of all ages participating,” he said.

The Department of Parks and Recreation will request county funds to conduct a recreation needs assessment next year to determine what athletic facilities and other projects it should pursue next.

The county is also looking to expand its network of greenways — areas of vegetated open space that connect places. Greenways with trails can make it possible for residents to bike or walk to a variety of destinations, including parks. One proposed 8-mile trail would connect UVa Grounds to the Ragged Mountain Natural Area and Hedgerow.

Mahon said the local real estate community has become far more supportive of greenway projects in his 18 years of working for Albemarle County.

“Developers used to think people wouldn’t want strangers biking near their homes,” he said. “Now, people will buy into the neighborhood because of the bike paths.”

But building new greenways is easier in some parts of the county than in others.

“Crozet has a tremendous trail network because so much of it was thought out in the planning process,” Mallek said. “Doing that advance work is really helpful to get things laid out.”

Expanding greenways is more difficult in older neighborhoods. Mahon said county parks staffers are constantly on the lookout for changes in landownership that could make new greenways possible.

“We never stop working on it, but some of the pieces just aren’t ready to become anything,” he said. “It takes time, patience and stubbornness.”