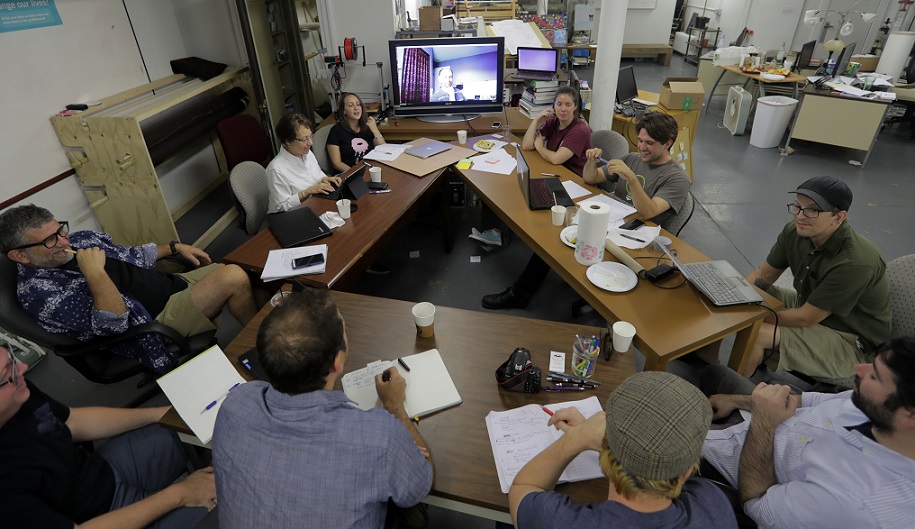 Open Bio Labs held a small conference with leaders of similar labs to figure out how to make them more visible to their community Sunday in Charlottesville, Va.

Over the past decade, community laboratories across the world have allowed people to become DIY biologists, inventing technology and investigating the natural world regardless of their scientific background.

About a dozen amateur and professional scientists gathered in Charlottesville this past weekend to discuss ways to increase these labs’ visibility to the public, and how to make them more financially sustainable.

Shaun Moshasha, a 2013 graduate of the University of Virginia, founded Charlottesville Open Bio Labs in 2015. The organization’s first lab is in a 2,000-square-foot space off West Main Street.

Moshasha said Open Bio Labs is supported by donations, tuition fees from classes it offers and payment from biotechnology startups to lease the space. Cerillo, a startup developing novel laboratory instruments, is using the community lab for its research this year.

Moshasha said the lab will host animal dissection lessons for homeschooled students this fall. He said he also would like to form partnerships with Albemarle County Public Schools, the Charlottesville Albemarle Technical Education Center and Piedmont Virginia Community College.

“One of the biggest social problems we face today is a disconnect between scientists and the community,” said Billy Nash, a postdoctoral fellow in UVa’s Department of Nephrology and a friend of Moshasha.

“Anything you can do to bridge that gap will benefit people on both sides.”

On Saturday morning, Open Bio Labs patrons and representatives from other Virginia community labs held a teleconference with Jennyfer Peterson of Nova Labs, a large makers pace in Reston.

Nova Labs members pay $99 per month for unlimited access to the space. Some members pay additional monthly fees to store their personal equipment in the lab.

Peterson said Nova Labs benefitted from having a dozen founding directors with diverse skill sets. Moshasha told her that he has managed Open Bio Labs virtually on his own.

“‘Lean management’ does have its benefits,” said Steve Hunter, an Open Bio Labs patron and organizer of Charlottesville’s Mini Maker Faire. “You can do what you want, when you want. You don’t have a lot of personalities fighting with each other.”

As a science journalist, Grushkin became interested in doing laboratory research of his own. In 2009, he began inviting other scientific hobbyists, entrepreneurs and artists to conduct experiments in his living room.

“There was no way for me to try [scientific research] other than to go back to school, basically starting from scratch as an undergraduate,” he said. “It would have taken me a decade. Starting Genspace was my way of short-cutting that process.”

Genspace moved into an official laboratory in 2010, and has since become one of the major centers of DIY biology on the East Coast.

Grushkin is working with Todd Kuiken, a senior research scholar at North Carolina State University, to codify a process for creating safe and successful community labs.

“Every city and every town has its own needs and requirements,” Grushkin said. “There are some common points, but we need to do more research to find them.”

Richard Conroy attended the conference to network and make plans for Capital Area BioSpace, a DIY biology organization in the Washington area.

Capital Area BioSpace currently uses the Nova Labs maker space. On Saturday, Conroy and his colleagues resolved to move to a new location by next July.

“The real value of this event is figuring out how we can collaborate with other labs,” Conroy said.

Conroy, a program leader for the Common Fund at the National Institutes of Health, said he and other science policy administrators enjoy using community labs in their spare time.

“All of us [former scientists] have ideas that we still would like to pursue,” he said.

Conroy said Capital Area BioSpace, like many DIY biology organizations, has been in contact with the FBI to ensure its lab could not somehow facilitate an act of bioterrorism.

“It’s good that governments are aware and ahead of what’s happening in these labs,” he said. “It’s also good that they aren’t being too heavy-handed with their oversight.”

Elliot Roth’s community lab in Richmond, Indie Lab, is housed in a residential garage. He has used the lab to grow algae for his nutritional supplement startup, Spira.

Roth said he would help Capital Area BioSpace look for a new home after moving to the Washington area later this year.

“It’s hard, because there aren’t many resources out there for stuff like this,” Roth said.

“But community labs are still the most cost-effective way do this kind of work,” he said. “If I don’t have a lab, I need to start one.”