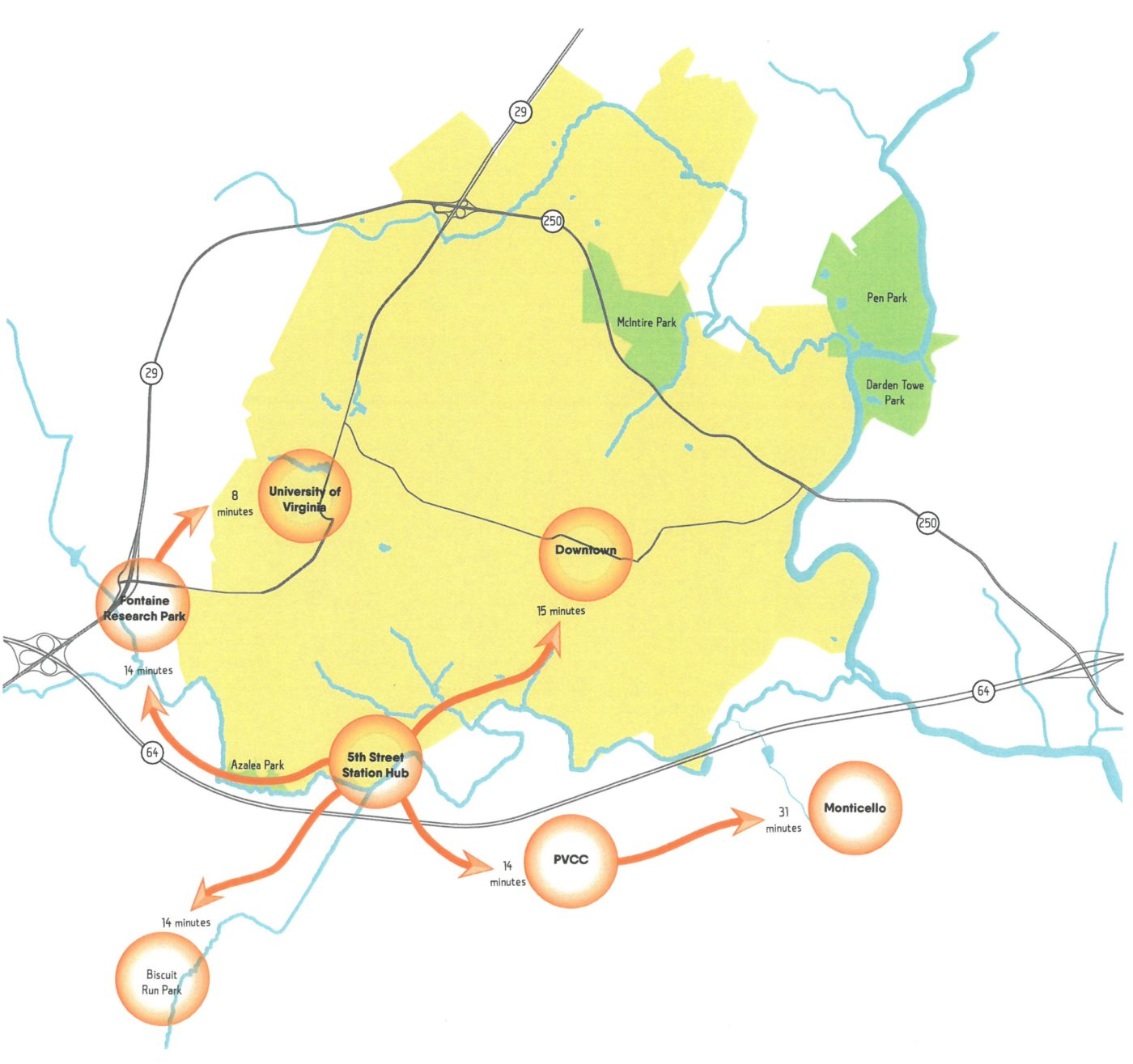 The public had its first chance Thursday to see plans for a “trail hub” designed to connect current and future pathways near 5th St. Station in Albemarle County.

“This came out of a conversation that [county trail planner] Dan Mahon and I had about five years ago, and he showed me his maps,” said Billie Campbell, senior program manager for the Thomas Jefferson Planning District Commission.

“It’s a project that we hope will serve as a catalyst for other things that are taking place,” Campbell said.

The TJPDC won a $400,000 award in 2016 from the Virginia Department of Transportation for the project.

The money helped the TJPDC hire the firm LPDA to develop a conceptual plan.

“The trail system that we are looking at is located to the south of 5th Street Station Parkway, to the east of Fifth Street [Extended] north of [Interstate] 64,” said Jessica Mauzy, a planner with LPDA. “The most important part of this is that there are connections in all directions beyond those limits.”

To the south of the hub is the future Biscuit Run park, the control of which was transferred to Albemarle earlier this year. To the west is Moores Creek and the Rivanna Trail to Azalea Park in the city of Charlottesville.

“We are just beyond the conceptual phase,” Mauzy said. “We’ve already gone into looking at the environmental implications of the trail. We’ve had our wetlands specialists looking at it.”

“For now, there is a parking area with a trailhead kiosk that will be constructed in conjunction with a new development that is being built just to the north of the Holiday Inn [on Fifth Street Extended],” Mauzy said. “They have dedicated some parking and a little connection trail for this project.”

Officials said they are hoping the project will be under construction in 2020.

The trails that will extend from the hub are at various planning stages. The project will enhance an existing tunnel that goes underneath I-64 with safety improvements.

The Piedmont Environmental Council is working with local and regional officials to promote awareness of the project. The PEC and the TJPDC are both implementing a Strengthening Systems grant from the Charlottesville Area Community Foundation designed to help with planning for the regional network.

“What PEC is trying to do in partnership is bring more of the community to engage on this issue and get more input,” said Rex Linville, chief land officer for the organization.

The city’s trails planner said the project is intended to augment the regional network.

“If you look at is as a spoke and hub system, this is one of the nodes kind of like McIntire Park at the John Warner Parkway,” Chris Gensic said.

Gensic said the grant provides enough money for both planning and construction.

“This is not one of those ‘put it on the shelf’ studies,” Gensic said. “The results of this tonight get them to move toward construction drawings and then we go to bid and we build it. I would hope we can get more grants like this, where you do the design and there’s actually money to build something when you’re done, because, otherwise, you’re designing in circles.”

One cycling activist was among the dozens who appeared at the open house.

“If this thing gets on the ground, it’s important as a start towards a connected trail network that is a shared-use trail network that everyone can use to really negotiate their way around Charlottesville without jousting with cars,” said David Stackhouse of the Charlottesville Area Mountain Bike Club. “I’m talking about pedestrians, moms with strollers, families, kids with bikes and regular cyclists.”

Stackhouse said the system would help people without cars to get around the community without needing one.

“This is an important first step,” he said.

The VDOT grant required a local match. That came in part from a $250,000 cash contribution made as part of the rezoning in 2008 that cleared the way for 5th St. Station.

“People have been eyeing this and looking forward to it for a number of years,” said Pam Riley, the Scottsville District representative on the Planning Commission. “This is all vision work connecting our neighborhoods to the south with Biscuit Run but also to the city. We’re very interested in eastern and western connections as well.”

Riley said she appreciated the regional approach being taken with the project.

“I think it’s organizing the people to advocate for a broader network,” she said.