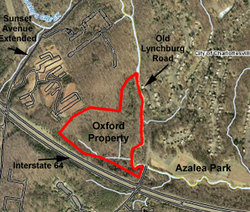 A Georgia-based developer has submitted a site development plan to Albemarle County to construct a 280-unit student apartment complex on the east side of Old Lynchburg Road, just south of the City line. That area of the County is being closely watched by members of the City’s Fry’s Spring Neighborhood Association (FSNA), who say the road is a residential street, and cannot handle the more than 4,000 vehicles that currently use the road each day.

Oxford Properties, which is headquartered in Atlanta, Georgia, is a developer of multi-family residential communities. They are in negotiations to purchase the 24.2 acre property, which lies just north of Interstate 64 and is less than two miles from the University of Virginia. Nearby there are several other apartment complexes, such as Eagle’s Landing and Jefferson Ridge.

FSNA members say they want the County to stop approving developments in the area until the proposed Sunset-Fontaine Connector is built.  The nearby Biscuit Run property was rezoned last year to allow up to 3,100 residential units. Other recently approved developments include the 300-acre Woodlands of Charlottesville, which markets itself as being “only eight minutes from North Grounds” and is located off Sunset Avenue.

The Oxford property is located in what the County refers to as Neighborhood 5 in its Land Use Plan. In August 2007, staff estimated the neighborhood has almost 2,000 homes and a population of just over 4,000 people.

The conceptual development plan, prepared by the firm Kimley-Horn, shows seven buildings with over 500 parking spaces, as well as a swimming pool and other recreational amenities. The land’s current zoning allows an average of 15 units per acre, and the land is marked for Urban Density Residential in the County’s Comprehensive Plan. That would allow the developer to build the units by-right without a rezoning. However, the developer will need at least two waivers in order to proceed.

According to a November 12, 2007 letter written by local attorney Valerie Long to John Shepherd of the Albemarle County Planning Department, Oxford is proposing a single entrance from the complex onto Old Lynchburg Road. The conceptual plan shows this entrance directly across from Azalea Park, which is in the City.

County code requires multiple apartment complexes with more than fifty units to be connected to at least two public streets. Long explains in her letter that requirement is not possible for this parcel, given that it borders Interstate 64, Moore’s Creek, and several existing apartment complexes.

Long also wrote that a critical slopes waiver will be necessary because of development proposed for the western areas of the property. The County Planning Commission will hold a work session to consider these two items at its first meeting of the year on January 15.

In February of 2007, FSNA members asked City Council to close Old Lynchburg Road until such time as the County builds the proposed Fontaine-Sunset Avenue Connector.  At that meeting, Council reached the conclusion they would only consider closing the road “as a measure of last resort” and decided to wait and see if the connector road would attract proffer dollars from the Biscuit Run rezoning.

The final proffers accepted by the County in September 2007 for Biscuit Run do not contain a specific allocation for the Fontaine-Sunset Avenue Connector, but do include up to $1.5 million for a project to add sidewalks, traffic calming measures and drainage improvements to the residential portion of Old Lynchburg Road.  Biscuit Run will also eventually generate up to $13 million in cash proffers that can be used for any projects in the County’s Capital Improvement Program.  The Fontaine-Sunset Avenue Connector is estimated to cost at least $12.8 million because of a need for a grade separated crossing of the railroad tracks.

Other transportation improvements for the area called for in the Biscuit Run proffers include an eventual new traffic light at the intersection of Fifth Street Extended and Sunset Avenue, intersection improvements at I-64 and Fifth Street Extended, and $2.3 million for a new connector road between Route 20 and the non-residential portion of Old Lynchburg Road to travel through the Southwood community, which is being redeveloped by Habitat for Humanity.