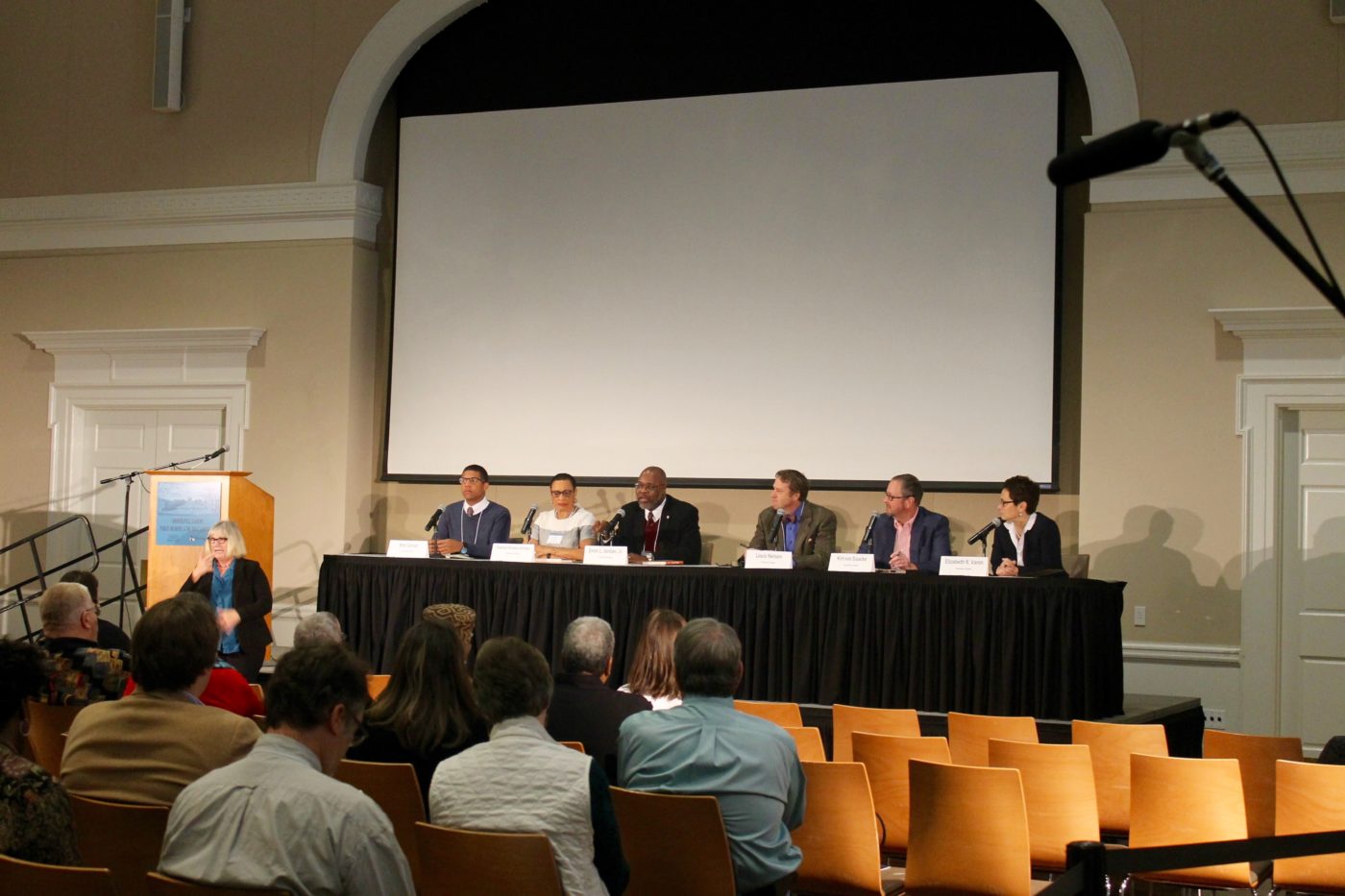 Opening panel at the symposium

Voices from Southern universities and historical preservation organizations joined the University of Virginia and the Charlottesville community to discuss slavery and history as part of the Universities, Slavery, Public Memory, and the Built Landscape symposium.

The two-day event was presented by UVA’s President’s Commission on Slavery and the University and the Slave Dwelling Project.

“We’re telling the story of the [UVA’s] past 200 years, and we don’t want to tell a partial story of that past… As we celebrate the achievements of the past two centuries, we can’t let those achievements blind us shortcomings in our history,” said UVA President Teresa A. Sullivan in opening remarks Thursday morning.

President Sullivan’s opening statement was followed by numerous panel discussions, speakers, and audience members all contributing to the conversation of slavery at institutions of learning and history.

Points of intense discussion included UVA’s plans to create a memorial to enslaved workers, and historic African-American cemeteries, including Charlottesville’s Daughters of Zion Cemetery, and the need to foster an ongoing consideration of slavery.

UVA’s plan to build a memorial to the enslaved laborers who built the university came up in multiple panel discussions.

“As one of the tangible products of the Commission’s work, we will soon build the UVA memorial to enslaved laborers in the green space just east of Brooks Hall, across from the Corner,” President Sullivan stated.

The Commission on Slavery decided what the memorial should look like through discussion with the UVA community, descendants of slaves, and the African-American community in Charlottesville.

“What we heard was, it needs to be something that is powerful, that it’s emotional, that it educates, that it provides an opportunity for people to understand,” said Frank Dukes, Distinguished Fellow of the Institute for Environmental Negotiation and member of the President’s Commission on Slavery.

“[The memorial] has to portray the duality of the fact that there’s this enormous harm done to this community but [the slaves] had agency, they had skills, they had creativity, they built this incredible landscape that we have,” said Dukes.

Estimated to be completed by 2019, the memorial is located in what UVA students sometimes refer to as the Triangle of Grass across from the corner. The scale and location of the memorial were carefully chosen by the Commission.

“The location that it’s in… is as close to the community as you can be but still be in the UNESCO World Heritage site,” said Dukes.

“[The memorial] actually has the same footprint as the Rotunda,” Dukes added, emphasizing the importance of scaling the memorial to highlight its message.

He also said, “It has to be a process. It can’t just be that we build something and then people walk by and forget about it.”

Ervin L. Jordan, Jr., Associate Professor and Research Archivist at UVA, added, “I’m glad the monument is being built… but after time passes the only people who pay attention to monuments are pigeons. So what are we going to do after we erect the monument?”

History of slavery and the built landscape became a central theme for various panel discussions over the course of the symposium.

A panel Thursday morning discussed “Cemeteries, Slavery, and History,” and touched on the Daughters of Zion Cemetery in Charlottesville.

Lisa Goff, Associate Professor of English and Director of Institute for Public History at UVA, spoke about “the meaning of the [Daughters of Zion Cemetery] landscape at the time it was created” as well as the current preservation efforts.

Daughters of Zion Cemetery, established in 1873, is located at the corner of Oak Street and First Street, a few blocks south of the Downtown Charlottesville. In 2015, it was restored from a state of being overgrown, vandalized, and “threatened by gentrification on several sides” by The Preservers of the Daughters of Zion Cemetery, namely Edwina St. Rose and Bernadette Whitsett-Hammond, Goff said.

“Over the six decades of its greatest activity, [from] 1873 to 1933, Daughters of Zion Cemetery was the burial site for numerous prominent Charlottesvilians, doctors, ministers, educators, and entrepreneurs,” Goff said.

Discussion of the Daughters of Zion Cemetery echoed the message that components of the landscape influence the community’s awareness and understanding of history.

The symposium’s celebration of progress and recognition of history did not occur without pushback, however.

Dr. Taj’ullah Sky Lark, founder of Sustainable Knowledge Global Solutions Consulting, spoke up at the “Engaging the Community: Slavery and Breaking the Town/Gown Barrier” panel, sharing her thoughts as a former employee of the University of Virginia, member of the Charlottesville community, and specialist in “equity and equality.”

“I think UVA has a perception problem,” Lark said.

“Who’s the real benefactor of any of this?” she asked the panel, speaking about the Commission, the memorial, and the research into UVA’s history.

“African-Americans are only being utilized for their stories,” she said.

She disagreed with the decision to inscribe slave’s names on the memorial. “You’re going to put them in perpetual enslavement with these Christian names that were forced upon them,” she said.

She suggested taking money allotted for the memorial and instead creating “scholarships for some kind of restitution and reparation for the descendants [of slaves].”

Nearly every panel called for an ongoing discussion of slavery and its legacies after the symposium has concluded and once the memorial to enslaved laborers is built.

Numerous panel speakers stated that completing a memorial will not signal the completion of the conversation on slavery but will hopefully promote an ongoing discussion and awareness of the history of slavery at UVA and in Charlottesville.