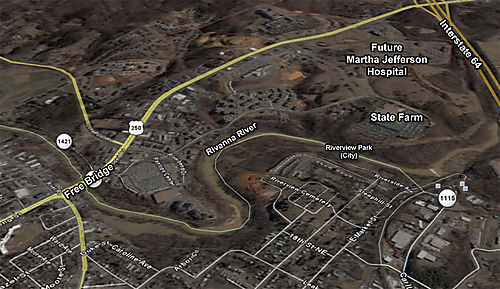 You’re an employee of State Farm Insurance, and you work at their office complex on Pantops Mountain in Albemarle County. You live near downtown Charlottesville, so as the crow flies your workplace is a mile away from your home. That would be a great walk, or even a quicker bike ride, if you had a direct path across the Rivanna River. Because Free Bridge is the only way to cross the river, a walk to work would really be two miles. That means you end up driving to work each day.

Randy Salzman thinks that hypothetical employee should be using his or her muscles to get to work. Salzman, a writer and transportation activist, is campaigning to have a bridge built to make it an easier commute by bike or foot. He is trying to convince the City of Charlottesville and Albemarle County to plan now for a pedestrian bridge to span the Rivanna River. He says one must be in place by 2012, when M artha Jefferson Hospital makes the move to its new location on Pantops, nearby State Farm Insurance.

“Psychological research shows greatly that people make behavioral changes when they are making other changes in their lives,” Salzman said in an interview with Charlottesville Tomorrow. “If the bridge isn’t there when Martha Jefferson employees are forced to change behavior to get to the new location, they will immediately begin developing the “new” habit of driving to the new location. Salzman said that will further congest Free Bridge, increasing political pressure to build a new vehicular crossing.

Salzman said he got involved to help the City and County work together to build the bridge, because he was concerned that nothing would be done otherwise. “There’s no built-in requirement that people think long-term or think outside of their jurisdiction,” Salzman said.

A pedestrian bridge across the Rivanna River is in the City’s Comprehensive Plan, which was last updated in 2007. However, the plan does not specifically list a location for a bridge, nor is an alignment selected. Chris Gensic, the City’s planner for trails, said while he too would like to see a pedestrian/cyclist bridge south of Free Bridge, the detailed planning work has not yet been done.

“At the moment, we have no funding identified, nor permission from property owners that would need to be involved, nor have we been able to study soils, bedrock, and floodplains,” Gensic told Charlottesville Tomorrow. “There are other bridges we are working on that have somewhat higher priority than this one, and are already further developed in planning.” Gensic said he’s hoping to have “a more realistic plan, cost estimate and timetable for the [Rivanna] bridge” by next spring.

Gensic said the City’s top bridge priorities are to build a bridge over the railroad tracks to connect the two sides of McIntire Park as well as a pedestrian bridge to connect Pen Park and Darden Towe parks. In those cases, all of the property is public and alignments have been selected. The Darden-Pen Park bridge has an estimated cost of $3 million according to Gensic.  Separately, the Lewis and Clark Educational Center is also advocating for a pedestrian ferry between Pen Park and Darden Towe Park.

Albemarle County Trails Planner Dan Mahon told Charlottesville Tomorrow that the Pantops bridge is a good concept that would connect a major employment center to City residents. However, he said there were many potential obstacles that will make planning fairly difficult. For instance, the riverbank along the County side is at a much higher elevation than the City. Mahon said there is more likely to be a potential for a pedestrian bridge further downstream, but that two bridges might be necessary to cross Moores Creek as well. As far as funding, Mahon said it would be best to pursue this bridge as a transportation project, rather than only focusing on funding sources for recreational purposes.

Salzman insists that the planning for the Pantops pedestrian bridge must be moved ahead now, so that the project can qualify for federal “transportation enhancement” funds. The Transportation Equity Act for the 21st Century (TEA-21) requires that 10% of all federal highway dollars returned to the states must be spent on “transportation-related activities that are designed to  strengthen the cultural, aesthetic, and environmental aspects of the Nation’s intermodal transportation system.”  The deadline for the next cycle is November 2008.