Parking meters could come back to downtown Charlottesville this August 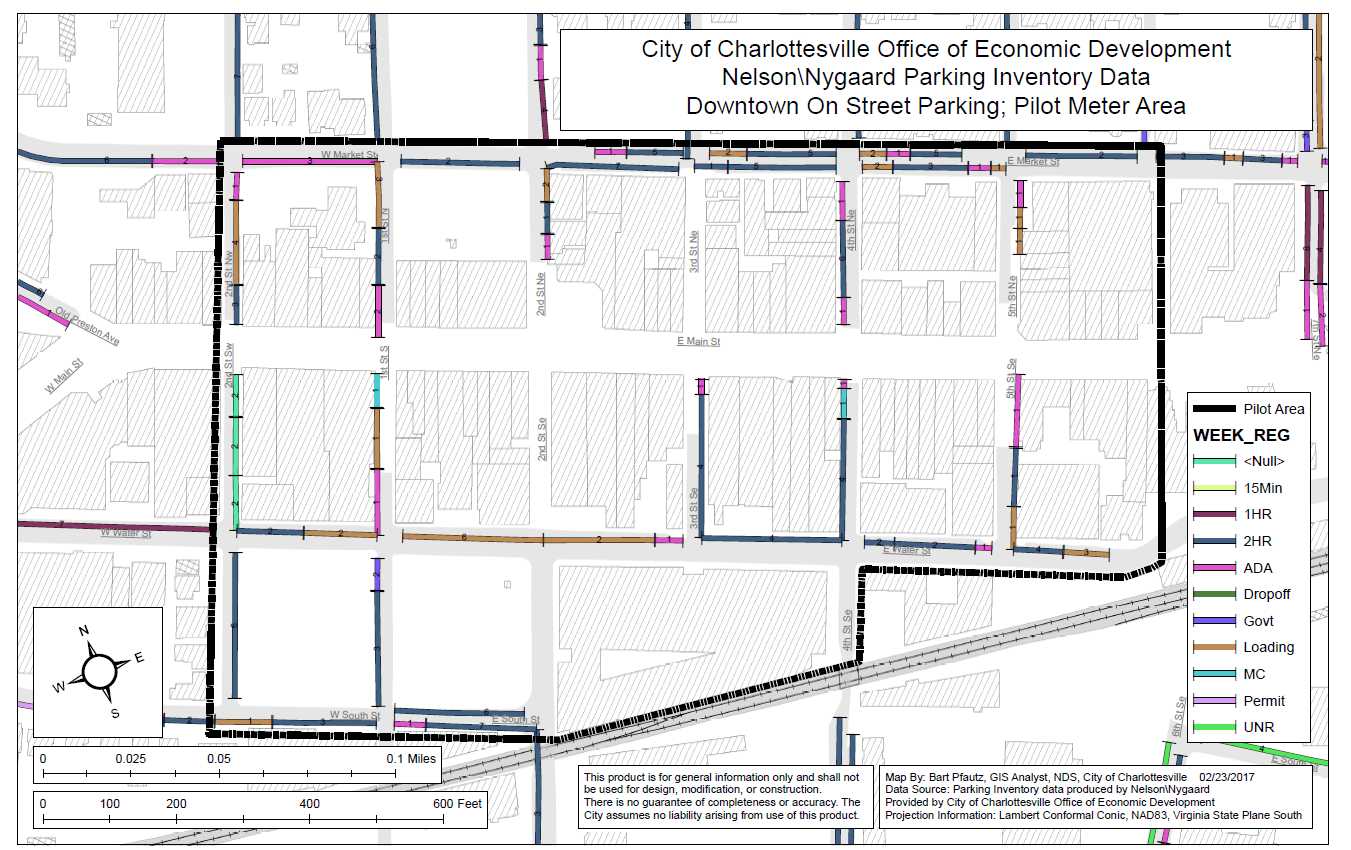 A six-month test of parking meters around Charlottesville’s Downtown Mall could begin as early as August. Officials believe that if the project is successful, it will improve the chances of finding a parking spot near the mall.

“What we hope that it does is open up some of those spaces,” said Rick Siebert, hired last year as the city’s first parking manager. “What we’d like to do is have people drive down a block and actually see an open space.”

Parking meters largely were removed from downtown in the early 1990s, but their return is being considered now as part of a larger plan to better utilize the city’s inventory of parking spaces.

“The city now desires to use a combination of multi-space and single-space meters in its central business district in order to help manage its on-street parking supply and its off-street parking lots more effectively,” reads a request for proposals issued Thursday.

Contractors have until April 5 to submit bids.

The City Council voted 4-1 in April to move forward with installing the meters for an initial six-month period. The meters will be installed in an area around the Downtown Mall with the northern boundary on Market Street, and South and Water streets serving as the southern limit.

Parking meters were recommended in city-commissioned parking studies published in 2008 and 2015.

“When you make something free, people don’t value it,” Siebert said. “People look for those spaces and they tend to camp out in them. Everyone’s heard of the two-hour shuffle, where people drive around the block after two hours looking for another space, adding to traffic congestion.”

Siebert said the goal is to get people to move to the downtown parking garages, which eventually could have lower rates than on-street parking.

“One of the things I’d like to see is if this gives us the ability to reduce the parking rate in the Market Street Parking Garage,” Siebert said. The city is the sole owner of the structure.

Rates at the Water Street Parking Garage are set by agreement with co-owner Charlottesville Parking Center. The two currently are locked in a legal fight about the CPC’s desire to increase monthly rates, as well as the city’s position that the CPC unlawfully purchased 106 spaces from Wells Fargo.

“On-street parking should be for customers and not employees,” Fenton said. “That is an accepted concept for retail, whether it is a mall or a downtown.”

But the city also must identify a solution for affordable and safe parking for those who work downtown, Fenton said.

Siebert said the pilot will begin without changing any of the current two-hour time limits.

The 2015 NelsonNygaard parking study recommended allowing a grace period of half an hour, but the pilot will not include that benefit.

The meters are just one part of the city’s new parking plan, which is being overseen by Siebert.

The city is in the initial phases of planning for a new parking structure on land at the corner of Ninth and Market streets.

“We’ve put about $10 million for parking investments, over the course of the next five years, as part of the capital improvement program,” said City Manager Maurice Jones.

That figure does not include the $2.85 million the council authorized to purchase the land currently occupied by a Guadalajara restaurant and a Lucky 7 convenience store.

Those businesses can stay put for several years before the garage is built.

The council also has authorized the establishment of an enterprise fund to support creation of the city parking department, which is overseen by Siebert. The department will be supported by revenue from parking garages, parking meters, fines and payments for permits required for special zones in the city.

“We feel very comfortable moving forward with other aspects of our parking plan,” Jones said. “We know it’s necessary and needed in our community to address what will be significant needs long-term when it comes to parking downtown.”

The request for proposals for meters came one day after the city awarded a contract to Lanier Parking Solutions of Richmond to manage the Market Street Parking Garage. The Charlottesville Parking Center has held that contract since the structure was built in 1975.

Siebert said the parking meter contract will be different from the one with the CPC, which expires at the end of the month.

“CPC currently takes all revenue in, pays all operating expenses, pays the city by check 45 days later,” Siebert said. “The new contract is set up where all revenue as it’s received is deposited the next business day directly to a city account.”

For the pilot program, the city will consider offering contracts to multiple companies, but the equipment to be used will be provided by the company for the duration of the pilot program. The council will need to determine if the program will be made permanent.

The pilot is intended to “evaluate the value of on-street paid parking and the functionality of the supplied parking meter systems.”

“We’re looking for two different types of metering systems,” Siebert said. “One is your more traditional standard individual parking meter, although they are very smart these days and they take credit cards. The other is a single pay station in the middle of a block that will serve all the spaces.”

Siebert said he also will study whether loading zones can be reduced in order to provide more parking spaces.

“We’ve got an awful lot of loading zones out there that seem empty an awful lot of the time,” he said. “We need to take another good look at that and see if we have the right balance.”