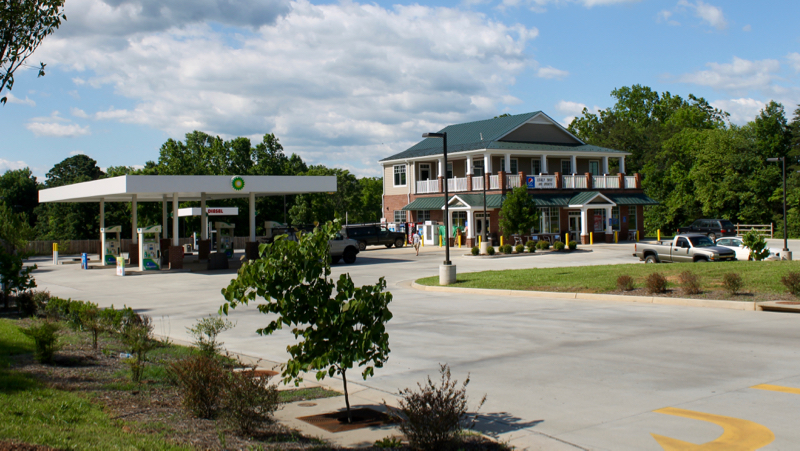 A proposal to expand Re-Store’N Station, a controversial gas station and convenience store in Crozet, may be facing another contentious review process after the Albemarle County Planning Commission voted Tuesday to recommend denial of a special use permit amendment.

“As good stewards to the community and to our natural resources, I think it is against my better judgment to support approval,” Commissioner Jennie More said.

Owners Jeff and Michelle Sprouse are seeking approval for a food service drive-thru lane, an auto repair shop and additional office space on the 4-acre property that sits west of Western Albemarle High School on U.S. 250.

The panel voted 6-0 to recommend the Board of Supervisors deny an amendment to a special-use permit issued in 2010 that limited the by-right permitted water use on the site to 1,625 gallons of water per day.

Commissioner Daphne Spain was not present at the meeting.

Other conditions in the original special-use permit limited the total building footprint to 3,000 square feet, restricted business operating hours to no more than 16 hours per day and prohibited overnight customer parking. Limits also were placed on the number and types of fuel pumps that could be used.

The owners were required to install a meter to monitor water consumption, in addition to a flow-restriction device that prohibited the withdrawal of more than 1,625 gallons per day.

The Sprouses acquired the property in 2006 and, following a contentious approval process, construction on the site did not start until 2013

“They are a third-generation Albemarle County family that has operated a convenience store in Crozet for more than 20 years,” said Jo Higgins with Project Development, a firm representing the Sprouses. “In order to have the capital investment required in order to meet the extensive regulations imposed … the full 4 acres needs to be developed to pay for it all, pay the employees and make a living.”

The station — located in Highway Commercial zoning — currently has a convenience store with office space on a second floor.

The owners are proposing an expansion of the convenience store that would include a drive-thru service window for coffee, donuts and sandwiches.

The plans also include an auto retail business and an auto repair business with rental office space on the second floor. In sum, the new additions would create a total square footage more than six times the size of the existing structure.

Additional construction, however, is contingent upon changing the conditions of the 2010 special-use permit.

While the Sprouses also have requested a lifting of the restrictions on business hours, overnight parking and fuel pumps, the commission’s discussion was focused on how the expansion would impact water resources.

County staff recommended approval of the project and said there neither would be changes in the water volume that may be used on the property nor would groundwater resources be negatively impacted.

“How are you predicting water usage to ensure us that they will stay under the amount that’s been allowed,” More asked Bill Fritz, county chief of special projects.

Fritz said the primary tools used to monitor water use are the flow-restriction device and the water meter.

The applicant also submitted information based on Environmental Protection Agency and Virginia Department of Health regulations and found total daily water use would be below 1,625 gallons, Fritz said.

Higgins presented information from 12 months of meter readings that found an average of 251 gallons of water is used per day, or 16 percent of the by-right amount.

Commissioner Bruce Dotson asked if the current proposal is the same size as a second phase that was discussed in 2010.

Higgins said it is about the same size, although the plan, which originally called for three buildings, has been reduced to two buildings.

During the public comment session, members of the Crozet community spoke out against the expansion.

John Savage, a member of the Crozet Community Advisory Committee, reiterated comments the CCAC made about the proposal in February advising the county to reject the amendment due to the increased traffic congestion the development may have and other negative impacts such as light pollution and noise.

The CCAC also noted “one of the key tenants of the Crozet Master Plan … is that further development on the Route 250 West corridor should be limited and discouraged, based on 250’s designation as a Virginia Byway and as an entrance corridor to Albemarle County.”

Former CCAC member Kim Connolly said she was bothered by the use of water as a “leverage tool to try to get this passed” and said neighbors need to be consulted.

Jason Crutchfield, who lives near the Re-Store’N Station property, said there have been issues with overnight parking and asked how the county can trust water readings that the owner took himself.

“In exchange for granting the exception [in 2010], the applicant agreed to the terms,” said Mike Marshall, former CCAC chairman. “Those are the conditions.”

“I know the perception is the applicant agreed to certain conditions,” Higgins said. “The very fact is we had to prove the water usage to be able to fully develop the site. And it’s been proven now. We’re talking 16 percent of 1,625 gallons.”

More said she would like to see a more thorough and critical look at predicting future water usage for the site.

The project is expected to be reviewed by the Board of Supervisors at a future meeting.