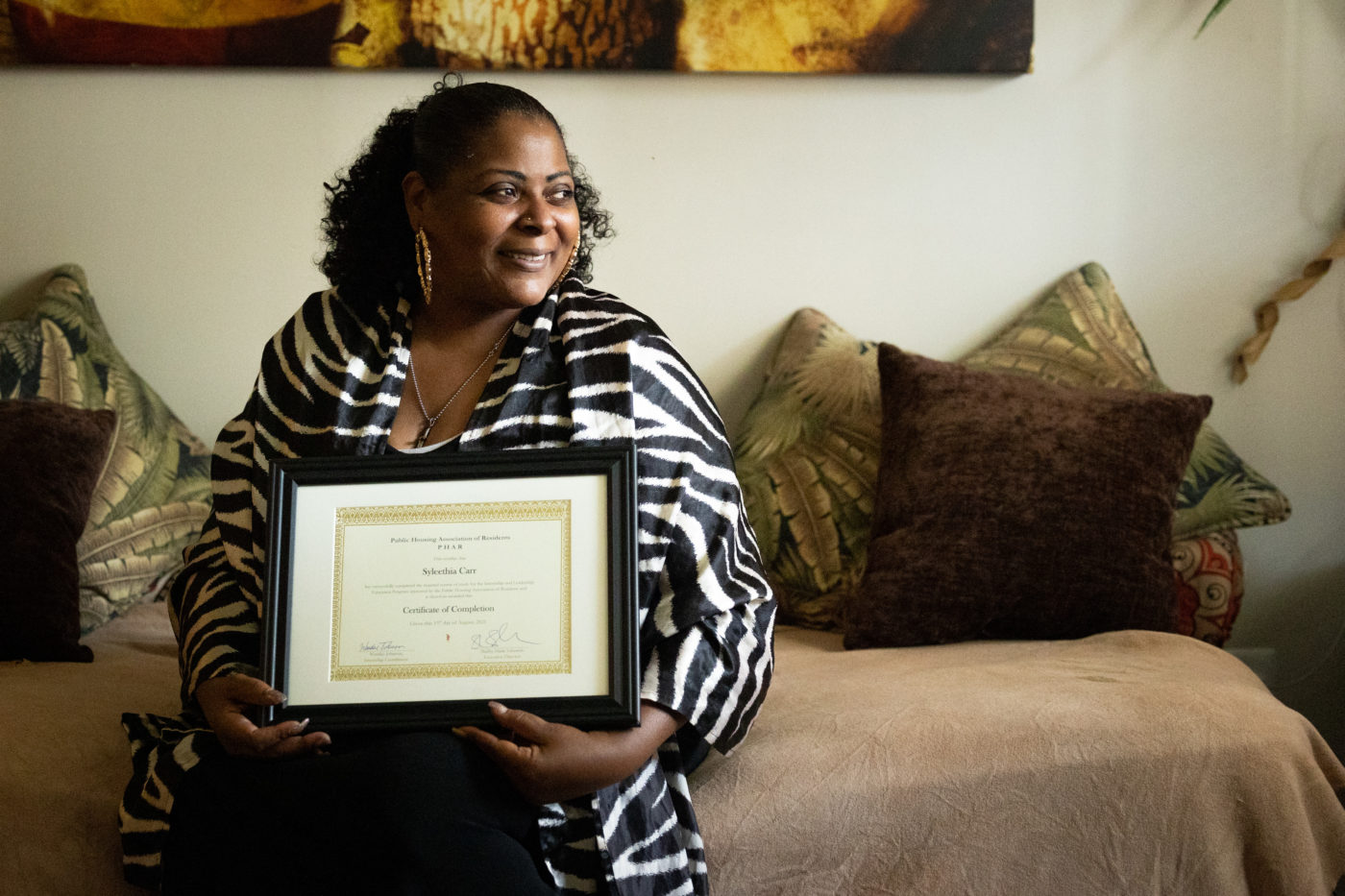 Sitting in her apartment, Syleethia Carr holds the certificate that shows she completed an internship with the Public Housing Association of Residents (PHAR). She's one of nine children, and some of her siblings are also involved in community-based nonprofit work.

Syleethia Carr was always finding flyers for one thing or another posted to the screen door of her home in Westhaven, Charlottesville’s oldest public housing community. But in the time she lived there, only one flyer ever caught her eye: One advertising an internship with the Public Housing Association of Residents, or PHAR.

“It was straight-up, point-blank. It made you want to know more,” Carr said of the flyer, which also let her know that participating in the internship wasn’t a violation of her lease. Her interest piqued, she looked up PHAR on her phone, and she liked what she saw: an organization that she describes as “helping residents learn about their rights and having a voice. They were part of that voice. I want to be a part of that.”

“So many low-income families are so unfairly treated, whether it be their homes not being fixed up, they’re not getting the right materials for their family. They have no resources, and PHAR actually helps with that,” she said.

On Friday, in a Zoom meeting attended by about two dozen community members — including Mayor Nikuyah Walker, PHAR co-Founder Joy Johnson and attorneys with the Legal Aid Justice Center — Carr graduated from PHAR’s internship program alongside Allexis Cooper and Ashley Freeman, ready to take what they’ve learned out into the community to continue advocating for fair, comfortable, sanitary and safe homes for residents of public housing in the city.

In her opening remarks for Friday evening’s ceremony, Wandae Johnson, PHAR internship coordinator and organizer, spoke of her great pride for PHAR as an organization and for this class of graduates.

“I appreciate the ways you’ve shown up and gotten to work with us at PHAR,” Johnson said to the graduates, “and I look forward to continue watching each of you as your journey continues. You’re all incredibly smart women with goals and dreams. I’ve watched you all problem-solve, accept additional responsibilities, consult and talk with people to help better form your understanding of critical issues. You’ve learned to communicate difficult information while also maintaining your cool, understanding that you can disagree and come back together and keep doing the work. Those are all skills that I feel like I’ve helped you to cultivate, but I also want to say you came with a certain amount of them in the beginning.”

It wasn’t an easy six months, said Cooper in an interview the day before the graduation. Cooper herself had to deal with liquid coming through the walls of her Westhaven home, and another intern had a housing choice voucher but couldn’t find a place that would accept her voucher and fit the program’s qualifications. Four interns began the program, and one had to withdraw due to life circumstances.

But, emphasized Cooper, “we’ve come together as a family. We’ve all tried to help each other. More than anything, PHAR has definitely taught me how to stick together.”

And the work itself — for which interns are compensated $11 an hour — is rewarding, said Cooper, who, like Carr, got involved with PHAR after seeing a flyer posted to her door. “A lot of the times, the flyers go right in the trash, but this particular one stood out.” She did a little research and understood that PHAR is “trying to make the community better, trying to bring the community together, and I’m totally for that. If I can do anything to make this community better, or pull it together, I will definitely do it.”

Over the course of the program, Carr, Cooper and Freeman attended Zoom meeting after Zoom meeting on topics such as public safety, CRHA properties, the police civilian review board, redevelopment, City Council and more. They learned to read policies and re-explain them in more general terms, worked to better understand rules and regulations that govern the housing authority. And, as Johnson pointed out in her remarks, they also “learned about the various boards and commissions that often make decisions that are shaping not just public housing, but Charlottesville as a whole.”

They learned all of this so that they could get involved and, hopefully, make a positive difference for their neighbors.

When Cooper began the internship, she did not want to get up to speak in front of a bunch of people she didn’t know. But she learned, and she tried. Early on in the program, PHAR needed a moderator for its 2021 City Council candidates’ forum in May, and Cooper stepped up to the plate.

Cooper has now spoken in front of the City Council and various other committees, too. At one point, she streamed a recording of one of her public comments on her television, and the oldest of Cooper’s three children was thrilled to see her mom on the screen. “That’s you on TV! That’s you on TV,” Cooper’s daughter kept saying, much to Cooper’s delight. 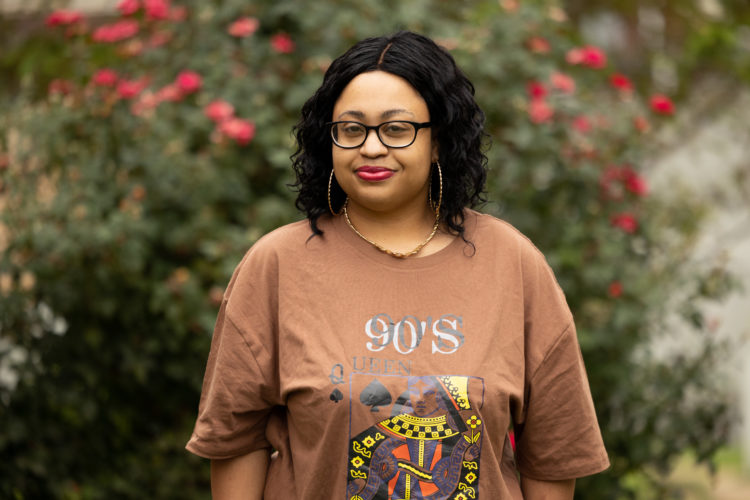 Before her internship with PHAR, Allexis Cooper hadn't considered public speaking. Now, it's a passion of hers.

While learning about more serious things, like how to read a lease so that tenants know their rights, was important and empowering for this class of PHAR interns, the community outreach aspects of the program were particularly memorable and rewarding, Carr and Cooper said.

They put together and distributed bags of cleaning supplies to the city’s public housing residents, giving them laundry and dish detergents, trash bags, surface cleaners and other items to help cut down on surface transmission of COVID-19 without cutting into families’ already tight budgets that were further threatened by the pandemic.

Along with Johnson, Executive Director Shelby Marie Edwards, and others, the interns also participated in door-knocking events in the various public housing communities to help spread the word about PHAR and its resources.

Cooper loved doing bingo night at Crescent Halls, an eight-story, 105-unit public housing apartment building for seniors and folks with disabilities. The building is undergoing much-needed extensive renovations, and while it will (hopefully) benefit residents in the long-term, the construction noise is a disruption to residents, most of whom will remain in their apartments throughout the process to avoid displacement.

Bingo night, where everyone got a prize as well as a gift bag containing candy, nice soaps and some other treats, was a break from all that, said Cooper. “It brightened up their day … made them feel a lot better.”

Carr, a single mother of three who is very family and community oriented, learned a lot from the cookouts PHAR hosted on each of Charlottesville’s seven public housing sites.

“You got to really see about your community,” said Carr, who has moved out of her Westhaven home. “I didn’t know there were so many different people living in low-income housing” until people came out to the cookouts with dishes from their own cultures. She saw Black folks and white folks, heard folks speaking Spanish and Arabic; she ate Indian food. Carr loves to cook — mushroom curry chicken with coconut rice, a side of collards or spinach, and a slice of sour cream and cheddar cornbread is her specialty — and she enjoyed contributing her own flavor to the events as well.

“It’s all races,” she said. “It’s numerous different cultures that’s living in poverty, living on low-income. Seeing that PHAR tries to bring everyone together and inform everyone what’s going on in their community.”

Carr also noted how other events, like the COVID-19 vaccination and vaccine education events, also had a positive effect on communities, bringing people together to learn and ask questions in a safe and non-judgmental space of caring and concern.

And sometimes, they were helping out individual people. One woman’s lights didn’t work — her electricity was totally out, Carr recalled. But because of the overwhelming list of problems that the maintenance crews have for the buildings, PHAR knew this woman would likely have to wait a while to get her electricity working again, so they advocated for her and got her moved up to the top of the list so that she wouldn’t be without electricity during hot summer days and nights. “It was great to see that happening. You saw a problem, and you actually solve a problem,” said Carr.

Both Cooper and Carr have big plans for all the knowledge they’ve gained in their internship.

Cooper, much to her own surprise, hopes to do more public speaking. “I want to look forward to a public speaking position, to speak not only for myself, but for the residents because everyone has a voice, but everyone doesn’t know how to use it,” she said, and now that she’s learned the importance of speaking on what she has to say, the importance of not always holding her tongue, she’s ready to hold the mic more often.

Carr is now employed with PHAR (she said she actually looks forward to going to work now), and she and her 16-year-old daughter are starting an anti-bullying nonprofit, inspired by Carr’s daughter’s own experiences being bullied when the family first moved into a public housing community. “Things happen in your life that knock you down,” said Carr, “and sometimes you get to a position in your life where you can’t take no more. That’s when you need more people on your team and having that network of people helps.”

Carr said this about the anti-bullying program, but it also speaks to the work she’s doing alongside Cooper and others involved with PHAR.