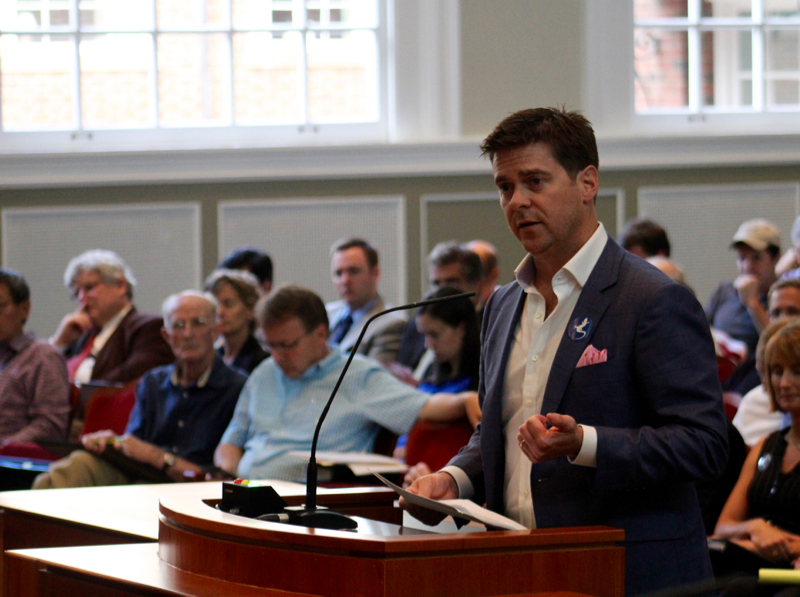 Alan Taylor, president of Riverbend Development, said Brookhill would have a beneficial economic impact on the county.

A proposal to rezone a 277.5-acre site between Polo Grounds Road and Forest Lakes South for a new development received the endorsement of the Albemarle Planning Commission at its meeting Tuesday.

Riverbend Development is proposing to rezone the site for a new development called Brookhill, which would have between 800 and 1,550 residential units if approved.

The property is currently zoned R-1 residential, but Riverbend is proposing to rezone it to Neighborhood Model District.

“It is a mixed-use development that I believe will set the standard for the way neighborhood developments are done in the future of Albemarle,” Riverbend President Alan Taylor said.

The development would include a town center with nonresidential and residential uses, with denser housing closer to the center and single-family detached dwellings making up most of the residential area.

Land-use planner Ashley Davies, of Williams Mullen — who is working with Riverbend on the proposal — said there will be over 100 acres of green space on the site.

Riverbend is proffering a 7-acre site in the Brookhill development to the county that could be used as an elementary school, as well as 60 acres on the other side of U.S. 29 for a future high school or other county uses.

Taylor noted the amenities that the site will have, including public plazas, parks and meeting areas.

“Historically, those amenities have fallen on the back of the county to create,” said Taylor, who also noted the economic impact that the development would have by providing jobs and providing tax revenue to the county.

Davies said the proffer package is worth more than $55 million.

Many residents of Forest Lakes and nearby residents, however, shared their concerns about the impact of the development — particularly how Brookhill would impact traffic.

“Access to the site will be from four locations,” the staff report reads. “There will be two entrances on the south along Polo Grounds Road, a right-in and right-out entrance from Route 29, a connection to an existing right-of-way in Montgomery Ridge subdivision and a connection through county property to the north at Ashwood Boulevard.”

Forest Lakes resident Steve James said he was concerned about the impact of the Ashwood connector on nearby residents.

“This connector is going to invite a lot of through traffic from the Brookhill development, and we are very concerned about that,” James said.

Scott Elliff, speaking on behalf of the Forest Lakes Community Association, said he thought the Ashwood Connector would increase traffic on Ashwood Boulevard and questioned the number of entrances to Brookhill.

“Forest Lakes has 1,500 homes … and two primary entrances,” Ellif said. “It works just fine, so why do you need five entrances for a development that’s the same size?”

Several residents also expressed concerns about a potential connection between Coralberry Place and the development.

“The developer has no interest in making a Coralberry connection,” said former Albemarle Supervisor Dennis Rooker, speaking on behalf of the applicant.

Elliff said the land near this connection is owned by the community association and they would not approve of any such connection.

“Brookhill is consistent with your comprehensive plan, Places29, the county’s growth management policies and the neighborhood model,” Rooker said.

Rooker noted that growth is intended for the county’s designated growth area and warned that rejecting proposals that meet county standards in the growth area may encourage haphazard by-right developments outside the growth areas.

Staff recommended approval of the rezoning, in addition to a special-use permit that would allow for grading activities in the floodplain to improve Polo Grounds Road and replace culverts with the road.

Commissioner Jennie More asked if the developer could speak about the traffic impact of the connector road on Ashwood Boulevard.

“We do not expect a lot of Brookhill traffic to take this connector,” said Carl Hultgren, with Ramey Kemp & Associates.

Commissioner Karen Firehock noted that members of the public said there would be more traffic on Polo Grounds Road to the east of the development and asked the developer to address those concerns.

Polo Grounds Road has a one-lane railroad underpass to the east of the development.

“Our traffic analysis shows less than 1 percent of our traffic going east,” said Scott Collins, with Collins Engineering. “The majority of our traffic is all going to 29.”

Commissioner Daphne Spain said she thinks Brookhill would have a greater impact than just 1 percent of the associated traffic going east and said she would oppose the rezoning unless changes could be made to improve safety for Polo Grounds Road.

The commission voted to recommend approval for the rezoning by a 4-to-1 vote, with Spain voting against the rezoning. Commissioners Bruce Dotson and Mac Lafferty were not present.

“We have 95 percent of the county with rural designation, 5 percent roughly in the growth area, and I believe that we need to support well-reasoned proposals in the growth area,” said commission chairman Tim Keller, who voted in favor of the rezoning.

The commission also recommended approval of the special-use permit, with Spain abstaining.