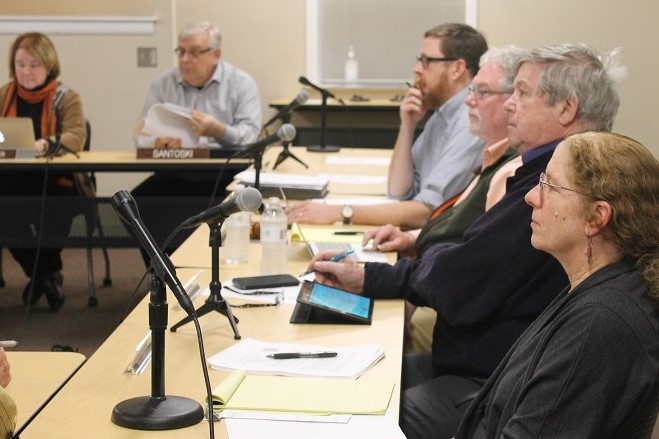 The planning commissions for Albemarle County and the City of Charlottesville discussed affordable housing at a joint meeting on Tuesday.

In March 2015, the City Council approved the use of $62,000 from the affordable housing fund to pay for the Charlottesville Comprehensive Housing Analysis and Policy Recommendations. The report, prepared by the Robert Charles Lessor Co., was presented to the council in January 2016.

The city’s Housing Advisory Committee reviewed the report with staff from the city’s Neighborhood Development Services department last year and issued a list of more than 30 recommended actions to the council.

Stacy Pethia, housing programs coordinator for the city, asked for feedback on these recommendations during Tuesday’s joint meeting of the Charlottesville and Albemarle County planning commissions.

In 2010, councilors set a goal to make supported affordable units comprise 15 percent of Charlottesville’s housing inventory by 2025. But that ratio has stayed flat at 10 percent since then.

The Housing Advisory Committee recommended that the City Council amend zoning regulations to create more opportunities to build affordable housing in Charlottesville. It proposed that the city offer density bonuses for multifamily developments with at least 17 percent affordable units and allow by-right increases in density for affordable units. The by-right increases would be capped at a doubling of the density permitted by current zoning.

Keller said the recommendations were “very aggressive” toward existing zoning and land development regulations. The proposed changes, she said, “would have wide-ranging effects on, perhaps, all [city] neighborhoods.”

Neil Williamson, of the Free Enterprise Forum, voiced support for the density incentives in a public comment.

“Reducing density in certain neighborhoods reduces housing affordability,” he said. “Where housing is matters. What it looks like matters. But what you can impact the most is regulatory reform.”

“Why wouldn’t there be more emphasis on providing social services to help residents maintain and take care of their household?” Santoski asked. “It would be a better long-term investment to address these underlying issues.”

Although the recommendations for Charlottesville were the focus of Tuesday’s meeting, the two planning commissions also discussed strategies for affordable housing in Albemarle.

Andrew Gast-Bray, director of planning for the county, said affordable housing in the county is sometimes far from public transit and other crucial resources for low-income residents.

Santoski agreed that expanded public transit between the city and county is essential. “The county should want to get people to where the jobs are,” he said.

County Planning Commissioner Bruce Dotson said Albemarle’s current affordable housing pool contains “a lot more units than we are going to build in a number of years” and suggested that the county do more to evaluate the condition of existing housing.

City Planning Commissioner Lisa Green said some affordable units in the region require residents to use extension cords to power their homes, which can be a fire hazard.

“We need to make sure that homes that we are saying are affordable [are ones] we would live in ourselves,” Green said. “I’m sorry, but some of them I wouldn’t want to put my dog in.”

The city Planning Commission has been tasked with presenting a final list of recommended actions to the City Council in March.

In December, the commission recommended a $1.7 million contribution to the affordable housing fund for next year’s budget, marking a 2.7 percent increase from last year. But councilors discussed the possibility of doubling the contribution at its budget work session Tuesday.