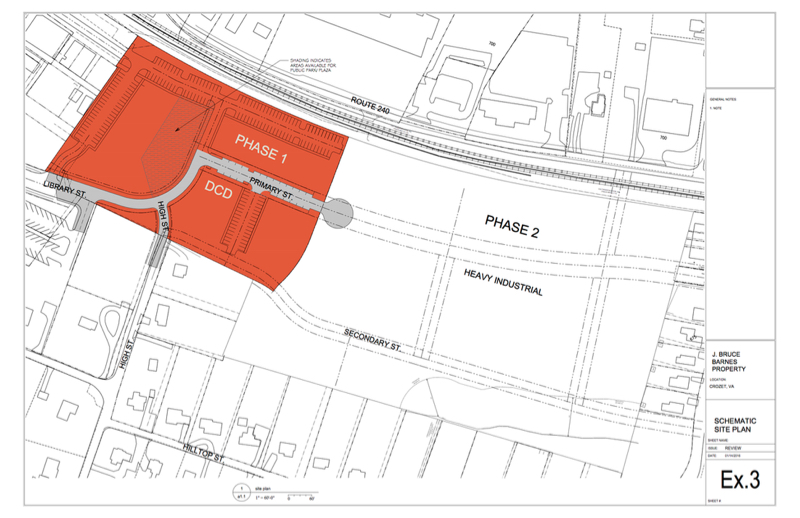 Stoner is proposing to rezone Phase I of the project from heavy industrial zoning to the Downtown Crozet Zoning District.

More than a year after a public engagement process, the wheels are turning for Crozet’s Barnes Lumber property and the Downtown Crozet Initiative.

“How will Crozet create an identity for itself that’s completely unique and that really makes it viable as an economic development engine for the future?” developer Frank Stoner said in a recent interview.

Stoner — of Milestone Partners and Crozet New Town Associates, which owns the 20-acre property that was formerly home to the Barnes Lumber Co. — is proposing to rezone a six-acre portion of the property from heavy industrial to Downtown Crozet District.

According to Albemarle County, Downtown Crozet District zoning “provides for flexibility and variety of development for retail, service and civic uses with light industrial and residential uses as secondary uses.”

The future development of the Barnes Lumber property has been divided into two phases, with Phase I “expected to accommodate 75,000 [to] 85,000 [square feet] of new commercial space with the option for multi-family residential above,” according to the Downtown Crozet Initiative website.

A minimum of 28,000 square feet also will be dedicated to public space, including “a minimum of 12,000 [square feet] of contiguous area … for a downtown plaza.”

Tim Tolson, president of the Crozet Community Association and a member of the Downtown Crozet Initiative — which is a committee of the CCA — said the phasing provides some flexibility for future development.

“We don’t want to have a plan for the whole thing now that locks us in when 10 years from now we discover the eastern part needs to develop differently than we thought because all of these other mitigating factors have appeared in the 10 years,” Tolson said.

A site plan for Phase I, however, will not be submitted until after the county approves the Phase I rezoning submittal.

“We don’t want to start buildings without a clear plan for the plaza because it’s such an important catalyst to attracting businesses, restaurants and retailers to downtown.”

Stoner submitted a rezoning proposal to the county in April and received feedback in May, with many of the comments focusing on the street patterns and a traffic study that was conducted for the site.

One comment from the county noted that a resubmittal will need to show the off-site road network because the traffic study “showed the need for modifications to the current entrance from Crozet Avenue to the Square … as [this connection] is being converted to a right-in only or possibly a right-in/-out.”

“A lot of the conversation with the county and [the Virginia Department of Transportation has] centered around [the] traffic study and how much needs to be done in order to address the traffic problems downtown and who’s going to do it,” Stoner said. “Our perspective was that [the redeveloped Barnes Lumber site] will certainly contribute to the problem, but there are existing problems with traffic in downtown and several of those intersections are going to fail over time — whether we build or not — and so the county and VDOT need to be part of that solution.”

A key part of Phase I will be the public plaza area, which Stoner and Tolson both have said will support a vibrant downtown.

“One critical obstacle for Phase [I] is a funding plan for construction of the plaza,” Stoner said. “We don’t want to start buildings without a clear plan for the plaza because it’s such an important catalyst to attracting businesses, restaurants and retailers to downtown.”

The plan is to fund the plaza through a combination of grants, private donations and money from the county.

Tolson said if construction of the plaza was solely left to the developer, it is possible that the plaza area would just end up becoming green space.

“It’s hard for the developer to develop something that doesn’t have any monetary return,” Tolson said. “Really from early on, over a year ago in this process, when we had the town hall meetings, it’s sort of been talked about and realized that to get a downtown plaza, [the] Crozet plaza that we want to have, it’s beyond the reach of the developer, beyond the reach of the county to fund such a [project].”

The Old Trail community, for example, has been doing several projects and hosting events because it has the revenue to do so, but it is difficult to do that on the front end of development, Tolson said.

“There’s been a realization that if we want something more than a plot of grass, then it’s got to be a public-private partnership,” he said.

No fundraising goals have been set for the plaza yet, but will be developed later in the process.

The Downtown Crozet Initiative holds meetings that are open to the public. The next meeting will be at noon July 7 at the Crozet Library.