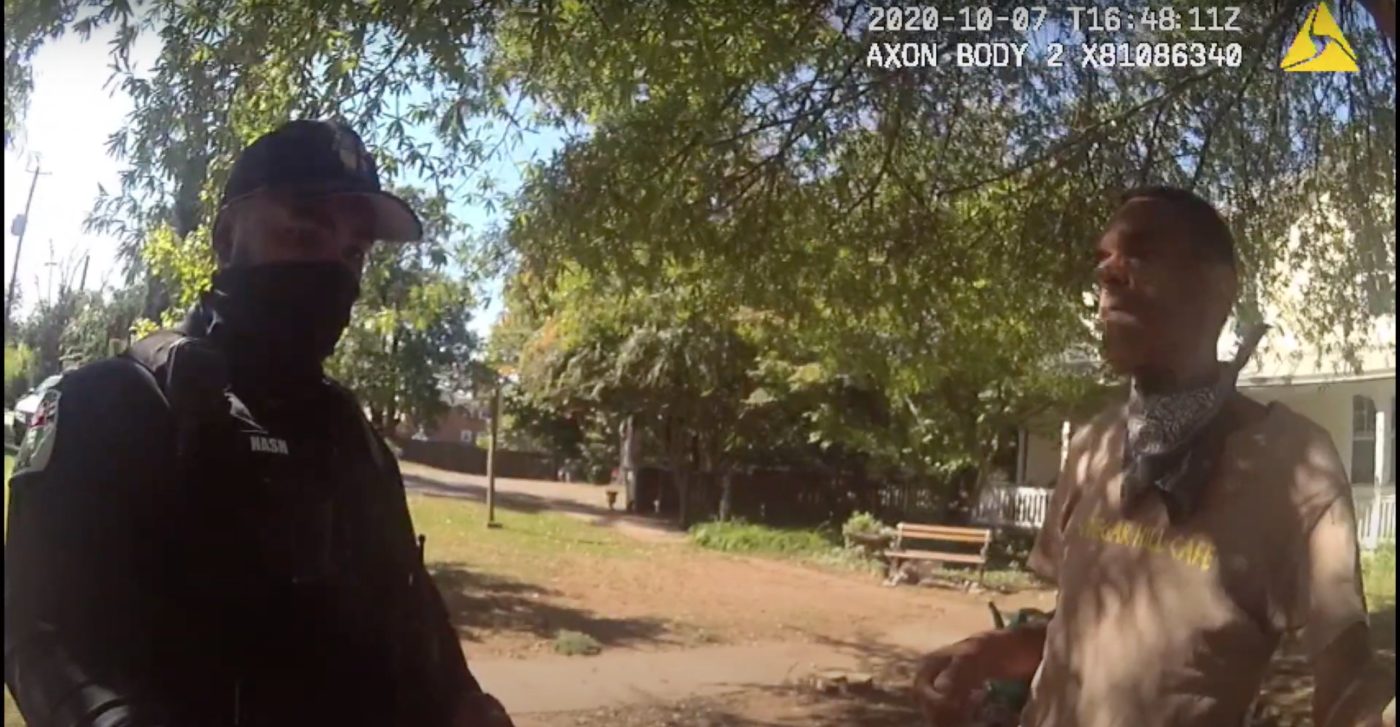 An officer speaks with a man identified only as Mr. Hoffman.

Charlottesville Police Chief RaShall Brackney called for the leaders of a local church who accused officers of racial profiling in October to “apologize or to be terminated,” saying their actions were “race baiting.”

The call came during a news conference Thursday in which Brackney played portions of body-worn camera footage that she said refuted allegations laid by the Unitarian Universalist Church and its reverend, Linda Olson Peebles.

“The complaint highlights the power of community members here seeking to leverage their privilege and self-serving agendas,” Brackney said. “Rev. Olson Peebles’ [and] the Unitarian Universalist congregation in Charlottesville’s allegations were irresponsible and preyed upon national headlines in order to gain the spotlight. This should not be tolerated by this community.”

CPD had conducted an internal affairs investigation into the complaint and determined the officers involved had done nothing wrong.

Peebles released a statement following the news conference that said in part:

“We are disappointed in the outcome of the investigation as it seems the police department of Charlottesville has minimized our member’s experience, our concerns, and our right to ask for the police to respond to us without malice. Our congregation stands by all our members of color, and united we remain vigilant against systemic racism and oppression.”

She had published an earlier statement on the church website Wednesday saying she and other church leaders were “concerned about [the police department’s internal affairs] findings.”

“The CPD report has a number of discrepancies between the testimony of the police and the account of our church member,” the statement said. “The church member’s response to the police report is that it was what is to be expected.”

The incident in question occurred Oct. 7 on Rugby Road near the church. Police officers received a 911 call from a resident saying that a Black man was on her property and that he was the same person who had burgled one of her neighbor’s homes.

That elderly Black man was a UUC member (identified by police only as Mr. Hoffman) on his way to work in a garden on the church grounds. Hoffman flagged a police officer down because he had seen the woman hurry into her house and suspected she had called the police, Brackney said.

Hoffman was not the person who had committed the burglary.

At least two police officers and three detectives were involved in the encounter.

During a 10-minute recording from the body camera of the first officer on scene, Hoffman can be seen telling another officer that the only reason the police were called was because he was Black. The officer, who was also Black, can be heard telling him several times that “race has nothing to do with it” and that the callers were scared because there had been burglaries in the area.

The body camera footage cuts out shortly after Hoffman walks away with one of the detectives to show him his garden, Brackney said. Hoffman was not charged nor detained, she said.

In an open letter to Brackney dated Oct. 15, Peebles said that Hoffman had been “walking up the sidewalk in front of [the 911 caller’s] house.”

According to the letter, an officer stopped Hoffman as he walked.

“Police stated that they were concerned about recent break-ins in the neighborhood and they had a picture of a suspect,” the letter said. “The suspect looked nothing like our church member, other than both men are [B]lack. Even after the police acknowledged that our member was not the suspect, they still demanded his Social Security number and identification. One of the officers even suggested that he walk another way to church!”

Peebles closed the letter by saying that “this racial profiling and harassment must stop” and calling for the department to apologize to “our member.”

Brackney said that none of Peebles’ version of events are true and that she had received her information fourth-hand.

The “only legitimate statement that Rev. Olson Peebles and her board made, although taken out of context, was an officer advised Mr. Hoffman to walk another way,” Brackney said. “That is correct. Mr. Hoffman’s route to the church included walking through private property, private backyards and sidewalks. Advising him, suggesting that that was not the way to walk, would be appropriate.”

Brackney said that Hoffman sent her a letter Dec. 3 that said, in part: “Over the past few months, individuals from the UUC Church Cville, Cavalier Daily and all the other people have it wrong and do not represent me.”

“Mr. Hoffman is correct in his indignation of the predatory manner in which Linda Olson Peebles and her board behaved,” Brackney said.

She added that she would not release the full letter out of concern from Hoffman’s privacy.

In her statement, Peebles said that the church member “is not interested in addressing this any longer and has asked us to not take any further efforts to address his particular situation. We ask everyone in our congregation to respect this congregant’s wishes.”