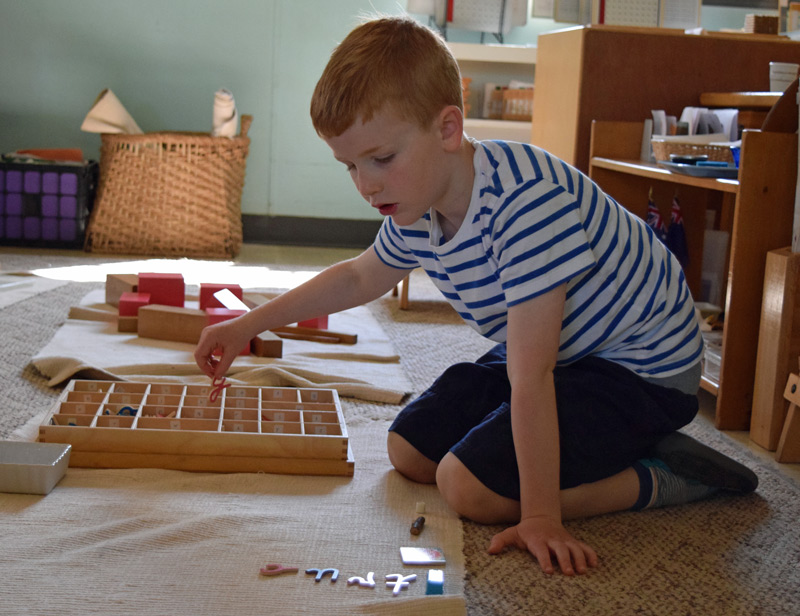 A student works independently at Mountaintop Montessori in Albemarle.

According to the United Way-Thomas Jefferson Area, about 250 at-risk 4-year-olds in Charlottesville–Albemarle will not be served by a pre-K program this fall unless something changes. Following a pre-K summit held last month, local leaders are now rethinking how preschool is offered in the area.

One organization that is serving children in a non-school-based location is ReadyKids — formerly called Children, Youth & Family Services. Currently, the initiative drives into the Friendship Court, Greenstone on 5th, Park’s Edge and Southwood neighborhoods, and through its ParentingMobile program, provides a “pseudo-preschool environment” for children ages 0-4 and their parents.

“As an organization we strongly support that there are a lot of ways to do things, and that not every option works for every family, so families should have choice,” said Jacki Bryant, executive director of ReadyKids.

During a ParentingMobile visit — which lasts two hours — children have the opportunity to participate in developmentally and educationally appropriate activities alongside their parent or guardian, who also learns educational techniques from the ReadyKids teachers.

“The kids start to learn about transitions and routines, which is important for being in school,” Bryant said of the program that runs through the school year. “So we’re encouraging all of these things, as well as the cognitive skills.”

And while two hours is substantially less classroom time than a full-day preschool program, Bryant said the teaching and learning extends beyond the visit.

“If we’re teaching their parents to be good first teachers of their children, then the children are getting two hours with educators, and then they’re with their parents, so we’re doubling the effect, if you will,” Bryant said, adding that during each visit parents also spend 30 minutes meeting as a group to discuss educational opportunities for their children.

“For parents who don’t have any other options, it gives them an option in their neighborhood,” Bryant added.

“Across city and county lines …a sustainable early
childhood education plan is what we need,” Peters said.

Based on the work of Dr. Maria Montessori — an Italian physician whose life spanned the late 19th and early 20th centuries — the educational approach is based in respect for a child’s natural inclination to learn, and children are provided numerous hands-on and collaborative activities that allow them to learn at their own pace.

The Montessori preschool model runs for three years and sees students remain in the same classroom with the same teacher — called “guides” — all three years. As a result, classrooms are made up of mixed age groups.

In addition to mixing ages, Arlington blends families of different income levels. Two-thirds of the students qualify for financial aid and thus pay on a sliding scale, while one-third of the seats are occupied by families who pay the full rate. Because the 5-year-old year in a public school is considered kindergarten, the final year of the public Montessori experience in Arlington is free.

Jean Peters, a former Montessori teacher who leads the Commonwealth Montessori Initiative — a statewide advocacy group — said she thinks Charlottesville-Albemarle could take a page from Arlington.

“It’s a perfect fit because you get the neighborhood school, but you also get the economic diversity within that neighborhood school,” Peters said, stressing that she isn’t pushing to replace any existing programs, and emphasized that Montessori could be a “piece of the puzzle.”

“From talking to everyone involved we can all work together as hard as we can and we’re still not going to meet the needs of all of the children in the area,” Peters said. “By adding a program that doesn’t take funding away from the other programs … we’re going to be able to meet the needs of more children.”

While many of Albemarle’s schools are reaching capacity, Peters said the Montessori students could easily be housed in learning cottages.

“If you do it at the schools … you’ll have the busing there, and you’d be taking some of the kindergarteners out of the classroom because they’d be in the Montessori classroom,” she said.

Regardless of how local officials choose to proceed, Peters called for Charlottesville-Albemarle to develop a vision.

“Across city and county lines … a sustainable early childhood education plan is what we need,” Peters said. “I think it’s time for us to stop focusing on what we have and expanding it, and seeing if there is something else that we can add.”