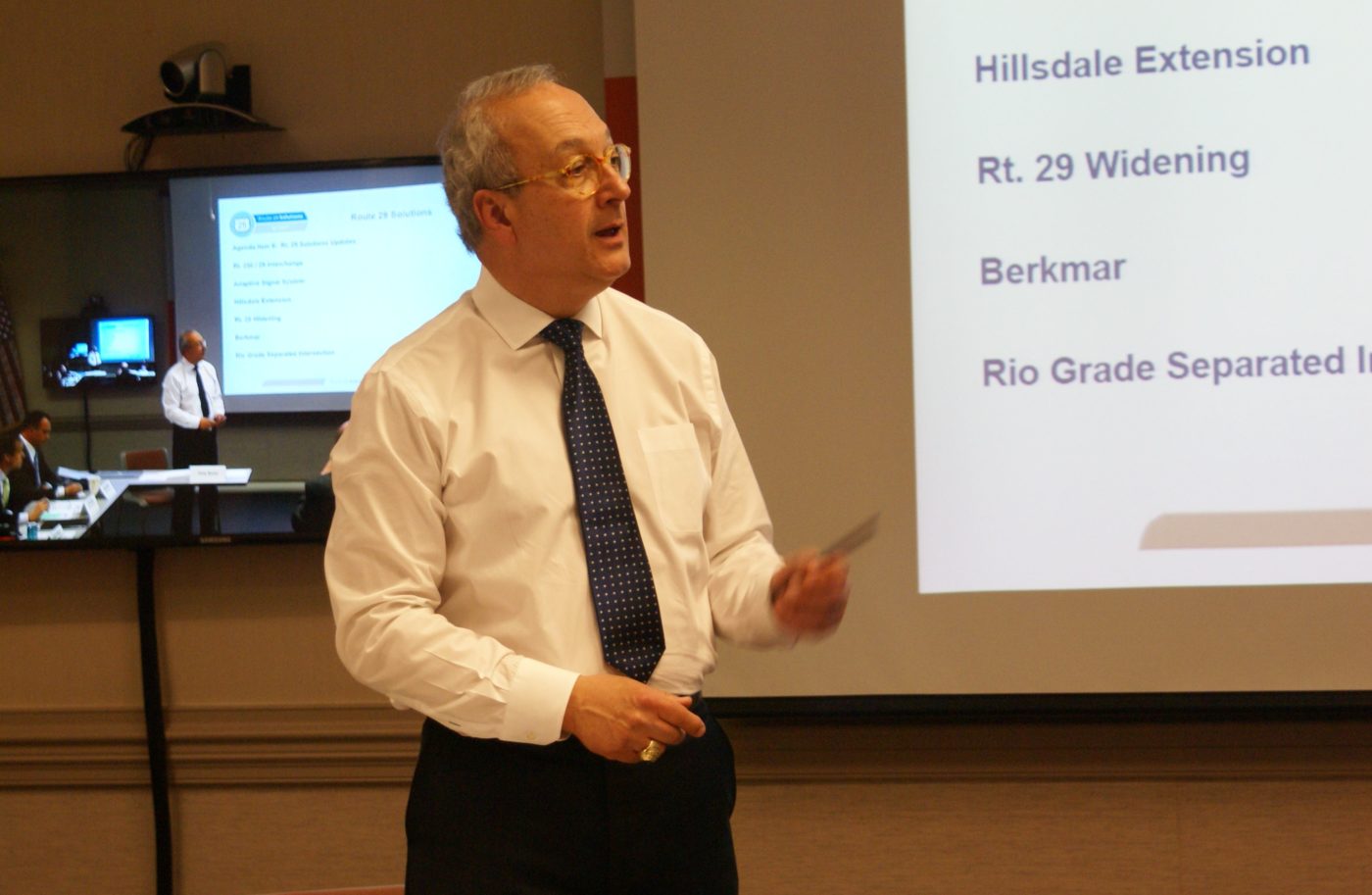 The Virginia Department of Transportation is proceeding with three major road projects in the U.S. 29 corridor despite a lawsuit claiming that federal and state officials unlawfully approved them.

“I don’t think VDOT has changed their plans as a result of the lawsuit,” Larry Davis, Albemarle’s county attorney, said during a briefing to the Board of Supervisors.

However, attorney Mark Obenshain, who is representing the owners of two properties that would be affected by the Rio Road interchange, said he is hopeful a federal judge in the Western District of Virginia will grant an injunction so that further study can be conducted.

“The defendants have been served and we are waiting for answers and we’re looking forward to getting a hearing on this as soon as we are able,” Obenshain, who also is a Republican state senator, said.

The plaintiffs consist of the owners of Albemarle Square shopping center and a nearby fast food restaurant. Both claim their properties will be harmed during and after construction.

The suit, which names both VDOT and the Federal Highway Administration as defendants, was filed with the court on March 6 but not formally served until later in the month. That gives the state attorney general’s office and the FHWA until late April to respond.

A hearing to consider the injunction has not been scheduled. If approved, the injunction would bring work on the projects to a halt. Among other things, crews are currently performing survey work and planning to relocate utilities for the widening and interchange projects.

The Route 29 Solutions package of projects was developed last year after a FHWA official told VDOT that more study was needed before the now-defunct Western Bypass could be approved.

The alternatives, which former VDOT Commissioner Philip A. Shucet advanced, include a grade-separated interchange at Rio Road and U.S. 29, the northward extension of Berkmar Drive and the widening of U.S. 29 to six lanes between Polo Grounds Road and Hollymead Town Center.

In February, the Commonwealth Transportation Board awarded a nearly $117 million contract to a consortium consisting of Corman Construction, Lane Construction and RK&K.  The group is to design and build all three projects.

The joint venture already has completed preliminary engineering on the widening and the interchange projects. The initial design of Berkmar Drive Extended is expected be ready in a matter of months.

All three projects are to be completed by October 2017.

“They seem to be very professional and we’re anticipating a detailed schedule in the next couple of months to show where they will be at various phases of the project,” said Mark Graham, the county’s community development director.

The lawsuit alleges that VDOT and the FHWA did not comply with the National Environmental Policy Act when they approved the interchange, the widening and the Berkmar extension.

Specifically, the suit argues, the projects were unlawfully split into three to evade more rigorous scrutiny.

Opponents of what is now known as the John W. Warner Parkway made similar “segmentation” claim, but federal Judge Norman K. Moon ultimately ruled in 2012 against that argument and the highway project was completed.

The group Smart29, which has waged a media and public relations campaign against the Rio Road interchange, is not a party to the lawsuit.

Michael Kelly, a spokesman for the attorney general’s office, said the state had no comment and will respond to the filings in court.

Meanwhile, local and state official are proceeding with preparations for major construction in the area.

Albemarle supervisors were briefed Wednesday on strategies that the county will use to communicate information about the area before and during construction.

“There’s a whole plan for how this will all phase over the next 2 ½ years,” said Lee Catlin, the assistant county executive. “The activity really starts to peak at about March of next year at a high sustained level through next October during construction of the intersection.”

Catlin also said the county will work with VDOT to communicate to major employers along the corridor so they can tell their customers and employees how they will be affected.

“That’s a group that we have not reached out to yet as aggressively as we have the businesses and the residents of the area,” Catlin said.

Supervisor Kenneth C. Boyd said he is getting calls from people who live on Proffit and Polo Grounds roads who are concerned about cut-through traffic during construction.

“That’s something that needs to be discussed,” Boyd said. He suggested that VDOT reinstall a temporary light on Polo Grounds Road to control access at a one-lane railroad underpass.

Boyd also suggested a study for a traffic light at the intersection of Proffit and Stony Point roads. A 6-year-old girl was killed after a vehicle collision there in December.

Graham said the project advisory panel has acknowledged the idea that Proffit may be used as a detour and that VDOT is working on a response.

Shucet considers the just-commenced improvement of the interchange of U.S. 29 and U.S. 250 as the first project in the Route 29 Solutions package. The firm Fielder’s Choice must finish the “Best Buy ramp” before the Rio Road interchange and the widening begins in earnest next May.

Meanwhile, VDOT is continuing to return properties that had been acquired for the now-defunct Western Bypass.

Two properties have been sold so far.

“That process will continue in phases, with the improved properties in the early phases, until all properties have been processed,” Hatter said.