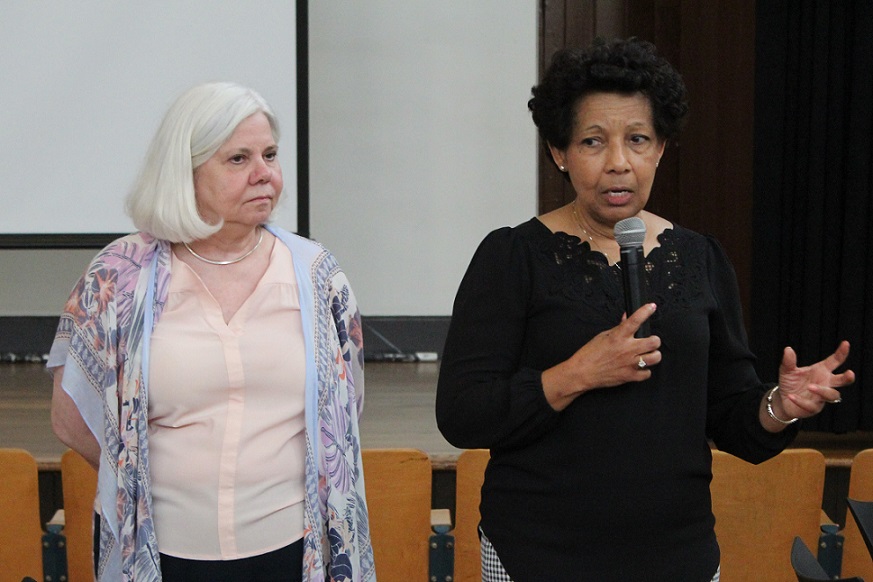 Educators shared their strategies for meeting the unique needs of each child at the fourth annual Symposium on High-Quality Preschool.

“We always have to think about the physical, cognitive and social-emotional domains,” said Pam Moran, Superintendent of Albemarle County Public Schools. “The purpose of our work is for every family to have the support and services they need to enter our preschool programs… and walk into our Kindergarten classrooms with the things that they need to be successful.”

About 150 people attended the symposium, which was organized by the Early Education Task Force of Charlottesville-Albemarle as a free professional development opportunity for preschool educators.

The task force was convened by the United Way-Thomas Jefferson Area in 2015. Members of the task force include elected officials and representatives from local schools, businesses and nonprofits.

Erika Viccellio, executive vice president of the United Way-TJA, said the area’s preschool programs were able to accept all 4-year-olds who applied during the 2017-2018 school year. The task force was able to achieve this goal with help from Virginia Preschool Initiative grants to sponsor enrollment at private preschools.

A $16.3 million addition to Woodbrook Elementary School and recent redistricting is expected to result in a net gain of three classrooms for preschool programs in Albemarle County next school year.

“The United Way has been an incredible powerhouse in fueling the work in this community to expand and deepen our commitment to early childhood education,” Moran said.

SCAN— “Stop Child Abuse Now”— was founded in 1991 to prevent and treat child abuse and neglect in the city of Richmond and surrounding counties.

Powers said that individuals and communities can be upset when children in their care are deemed to be traumatized or at-risk.

“But we have to acknowledge that there are stressors that can impact a child’s development,” Powers said. “We as a community have to relieve those stressors.”

The psychological and physical effects of developmental trauma can limit a child’s ability to learn and control their emotions. Powers said teachers and classmates can often mistake their emotional outbursts for a “bad attitude.”

Powers often lets children’s questions and interests shape her preschool’s lessons and projects. She said that doing so often gives insight into the adverse experiences they are facing at home.

“We have to tell these children: we want you here, we want to make it work for you,” Powers said. “We care about your feelings, even when they are those angry, frustrated feelings.”

Powers said that teachers shouldn’t worry about the perceived age-appropriateness of comforting an emotionally dysregulated child by holding them in their arms or on their lap.

“When [children] are dysregulated, it is not time for them to pull up their bootstraps and be a ‘big boy’ or a ‘big girl,’” Powers said. “If they could do that, they would.”

Trauma-informed teaching was a recurring theme at Tuesday’s symposium. The event included breakout sessions on the treatment of attachment injuries, strategies for teaching refugee children, and using mindfulness to help students cope with trauma.

“There has been a groundswell of interest in trauma-informed work in our community,” Viccellio said. “It is an important focus area that is applicable and appropriate for everyone.”

Amanda Williford, an associate professor at the University of Virginia’s Curry School of Education, said Virginia localities should do more to help preschools teach social and emotional skills to children.

Williford said children who attend preschools supported by the Virginia Preschool Initiative perform better on math and literacy assessments than children who do not attend preschool. However, evaluations by teachers reported no significant differences in social and emotional competencies.

“Those are the skills that are critical when you go out into the workforce,” Williford said. “People usually don’t get fired because they can’t create the spreadsheet or they don’t write the memos. It’s because they can’t get along with people.”

“It’s not cheap, and we have to do it well,” she said. “We can’t be scared of the data that tell us if its working.”

The United Way-TJA is continuing to develop the Outcome Collaborative, a data reporting system that will enable a longitudinal study of at-risk children in local preschool programs. Both Albemarle County and Charlottesville are contributing data to the project.

“We are collecting evidence to find which opportunities and experiences contribute to a child being successful all the way through high school,” said Rosa Atkins, Superintendent of Charlottesville City Schools.