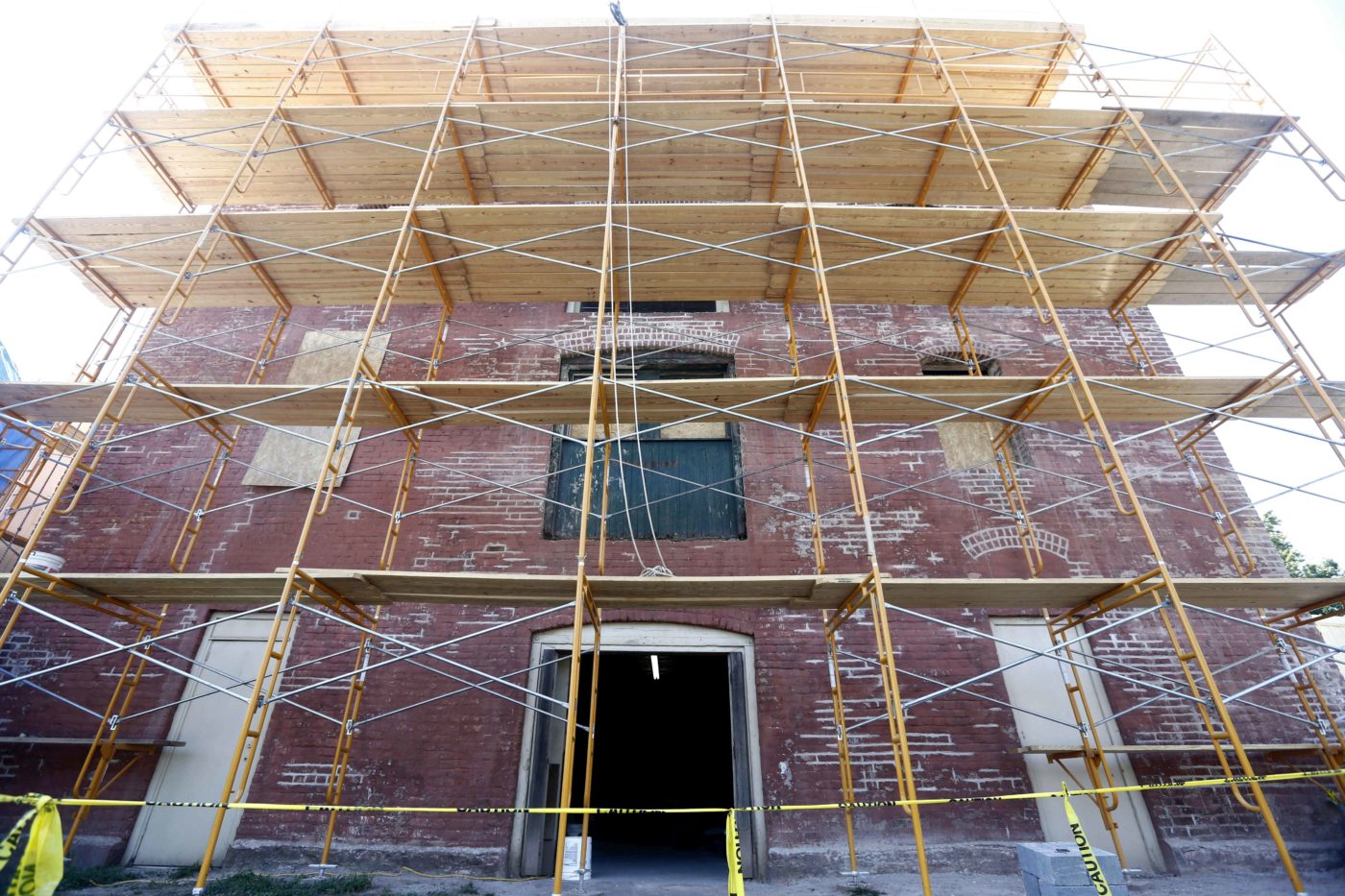 The red-brick front of the historic King Lumber Co. warehouse building is currently obscured by yellow scaffolding in the latest of several renovation projects on one of Charlottesville’s main commercial corridors.

“We just love what’s happening on Preston Avenue with the Coca-Cola building renovation and Three Notch’d Brewing,” said Mark Green, a partner in a $5 million effort to convert the King Lumber warehouse into office space.

Green and partner Tom Hickman have spent several years planning to redevelop the building and the rest of the 1.7-acre site. It’s all part of an effort to reestablish the property as an employment destination.

“In 1909, this building was built for the King Lumber Company, and by 1920 they were the largest employer in Charlottesville at 300 people working on this site,” Green said. “It was a large lumber processing and distribution center for them right next to the railroad tracks.”

Moxie, a hair salon, will move in September from its existing location in a yellow metal building to a refurbished warehouse space at the rear of the site. That will allow for a 16-foot breezeway to be cut between the wall of the King Lumber warehouse and the former site of Moxie.

Green said he is in negotiations with a brewery to take over that space.

Several metal sheds along the railroad embankment will be demolished to make room for more parking.

Oyster House, an antiques and furniture dealer, most recently occupied the warehouse but the company has moved into a smaller structure on the site. Three Notch’d Brewing also rents a small section of the site to refrigerate its products.

But the main attraction is the warehouse, which is being restored using tax credits approved by the Virginia Department of Historic Resources.

“They have a lot of say over what we do while preserving the historic fabric of the building and so we have to be very careful when we remove paint from brick that we don’t damage the brick,” Green said.

An archway at the back of the building will be restored and will serve as the main entrance. An elevator will be installed. Windows that have been bricked over for decades will be restored.

One item that must remain on the third floor is a large gear that used to operate a freight elevator that would lift logs and wood to the top of the building.

The top floor will be occupied by OpenSource Connections, a Charlottesville-based software development company that will move from its offices in Belmont.

Dr. Sam Spillman, of Balance Chiropractic, will relocate his practice from Rose Hill Drive into the bottom floor.

“I was hoping to find a location as near as possible to my current space, but with more room and more parking,” Spillman said. “I really like the idea of being in an older unique space.”

Spillman’s practice will now be much larger, allowing him to offer more physical therapy services.

So far, the second floor of the warehouse is still available.

The renovation of the King Lumber warehouse comes at the same time that Riverbend Development is renovating the Coca-Cola building with new spaces for local shops and office space for the University of Virginia.

Growth on Preston Avenue is, for now, happening in a different fashion than it has on West Main Street, which has seen several new multi-story buildings go up in recent years.

On Preston Avenue in the Central City zoning district new buildings can have a maximum height of 50 feet but can rise up to 80 feet if the City Council grants a special-use permit.

“Nobody has really taken advantage of that zoning yet on Preston Avenue so it’s sat there kind of idle,” Green said. “I think as soon as somebody does you may have some similar reactions to what you’re seeing on West Main.”

Green said the work on the warehouse will be completed by the end of January.