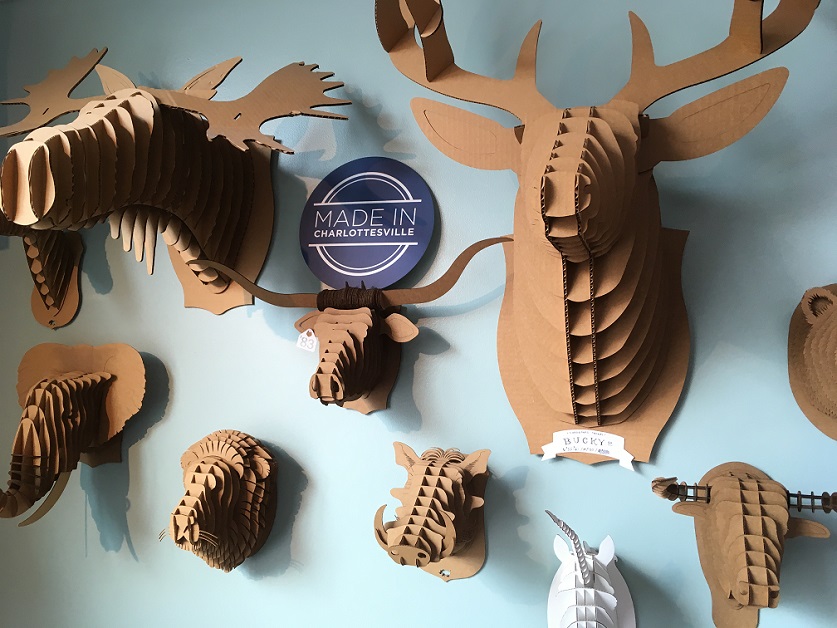 A new initiative is promoting candy, furniture and software under a single brand: Made in Charlottesville.

The program, sponsored by the city’s Office of Economic Development, aims to increase the visibility of businesses that design or manufacture products within the city limits.

“There are many businesses in Charlottesville that are really well known nationally — even internationally — that no one knows about here,” said Jason Ness, business development manager for the city.

Ness cited as examples Blanc Creatives, whose hand-forged cookware won the top prize in Garden & Gun magazine’s Made in the South Awards for 2015; and Rockbridge Guitar, which makes instruments for some of the world’s premier rock and folk musicians.

Although these two businesses have a limited customer base in Charlottesville, Ness said they benefit the community by creating jobs and inspiring civic pride “… in knowing that these things were manufactured or made here.”

Made in Charlottesville debuted with an initial group of 25 businesses this spring, and has since grown to include more than 50 participants. Businesses can apply for membership and join the program for free.

Made in Charlottesville members are listed in an online directory at madeincharlottesville.org. Business owners receive free window stickers featuring the program’s logo, and are encouraged to feature the logo on their packaging and websites.

Numerous American cities — most much larger than Charlottesville — have introduced similar branding initiatives to support urban manufacturing in recent years.

Baltimore’s Office of Sustainability launched a Made in Baltimore campaign this year. New York and San Francisco have supported brand campaigns managed by nonprofit organizations.

Made in Charlottesville differs from most of these initiatives by including software companies and other high-tech businesses. “They are making proprietary products within the city limits, and we thought it was important to include them,” Ness said.

Ness said Made in Charlottesville will host networking events for participating businesses to strengthen connections between local makers and retailers.

“Some of the smaller Made in Charlottesville vendors don’t have a lot of opportunities to really highlight their products, outside of the Charlottesville City Market,” Martin said. “We are giving those vendors a chance to tell their stories. And if it’s something we’re interested in, we could bring it onto our shelves and sell to more customers.”

Martin said he would meet with individual vendors before the festival to ensure their products are in keeping with Whole Foods’ quality standards. “Sometimes they don’t meet our standards, but could do so with a simple change of ingredients,” he said.

Made in Charlottesville businesses also will be featured at a CitySpace gallery event Oct. 6.

Stacy Miller said she accepted an emailed invitation to register her snack food business, GoodPhyte. “I think the program can help to create an environment where people feel empowered to start a business, knowing that there is a market that can support it,” she said.

Miller previously served as executive director of the Farmers Market Coalition, a national nonprofit. While Made in Charlottesville will not directly serve farmers in Albemarle County, Miller said it could enable food businesses such as GoodPhyte to purchase more of their produce.

“There is an opportunity here to define what ‘local’ means — particularly for food producers,” she said. “It’s a nebulous term that people often use loosely.”

Tavia Brown, a silversmith and owner of TaviaMetal, said Ness and other economic development staffers seemed excited to become better acquainted with each Made in Charlottesville business. “I think their excitement is contagious, and that will make the program work,” she said.

“[Made in Charlottesville] is a way to show off all of Charlottesville’s beauty,” Brown said. “It’s not just the landscape or the architecture; it’s the people here, and what they do. I like being a part of that.”