Proposed developments worrisome to some in Crozet 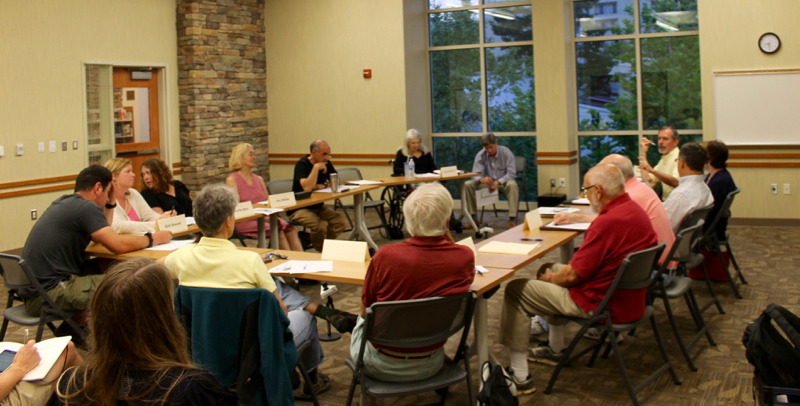 The Crozet Community Advisory Committee discussed the impact of growth on schools, as well as the West Glen and Adelaide developments at their June meeting.

Residents of the Crozet area are expressing concerns about overcrowded schools and new residential developments that will increase population and impact existing neighborhoods.

“We are redistricted to the point where there is nothing left to redistrict — everything is going to be overcrowded,” said David Oberg, who represents the White Hall District on the Albemarle County School Board.

Oberg joined the Crozet Community Advisory Committee last week for a discussion about growth in the western part of Albemarle County and its impact on schools.

CCAC member Beth Bassett asked Oberg how the School Board plans to handle the influx of students from new developments.

“Within five years, it is projected that 50 percent of our students will be in overcrowded schools in our county,” Oberg said. “Albemarle County has not built a new school in 21 years.”

Baker-Butler Elementary School opened in 2002, almost 14 years ago, and Oberg specified he was referring to the timing of the last decision to set aside funds with a commitment to opening a new school.

Oberg said that if the bond referendum scheduled for November is approved by voters, it will help mitigate the overcrowding issues but won’t fully solve the problem. The referendum would provide the school division with $35 million for projects such as an expansion of Woodbrook Elementary, which is in the urban ring of the county.

“The solution is, realistically, we’ve got to build more schools,” Oberg said.

Crozet resident and former CCAC member Bill Schrader said that, anecdotally, builders have told him people moving into new houses tend to be older and without school-age children.

“This is a different community than it was even 10 years ago. Even if we’re wrong on the growth, we need new schools.”

“Are we building for a rush that’s not going to come?” Schrader asked.

“This is a different community than it was even 10 years ago,” Oberg said. “Even if we’re wrong on the growth, we need new schools.”

The CCAC also talked about the proposed West Glen development and asked that the county Planning Commission recommend denial when a special-use permit application goes before the commission Tuesday.

The 40-acre West Glen property is located between Crozet Crossing on Cling Lane and Orchard Acres.

The Southern Development Group is requesting a special-use permit to allow for construction of a crossing over Powells Creek, which would extend Cling Lane to connect the proposed 81-unit development with Orchard Drive.

County staff is recommending approval of the special-use permit, with the condition that the density of the development not exceed six units per acre.

“If the bridge and the stream crossing are denied, they will not be able to build at all because of the existing special permit that is limiting that,” said Ann H. Mallek, the White Hall representative on the Board of Supervisors.

Robin Luecke, who lives on Cling Lane, said further development and traffic would damage the existing community on the road.

“I would encourage you to come spend a little bit of time on Cling Lane and see how many children are playing on the street with the cul de sac,” Luecke said. “All this money was spent on Jarmans Gap to make it a road that people could walk on and ride on, and we want Crozet to be that kind of community.”

CCAC members also expressed concerns about the crossing’s impact on environmental features such as the floodplain and stream buffer.

The committee suggested that a third party study any impacts on species in Powells Creek, and it expressed its opposition to allowing a variance in the county’s water protection ordinance.

A draft of the resolution is currently being written and will be presented to the Planning Commission on Tuesday.

An updated statement about the proposed Adelaide development, located west of Cory Farms along U.S. 250, also was passed at the CCAC meeting.

In May, the Planning Commission recommended approval for a rezoning request of the 20-acre development from R1 to R6 zoning.

The property falls within the neighborhood density residential land use designation of the Crozet Master Plan, which has a desired density of three to six residential units per acre.

The current Adelaide plan would be in the higher end of the density range, at approximately 5.5 units per acre.

In February, the CCAC passed a resolution opposed to the rezoning and said development at this density conflicts with the master plan’s desire to preserve the character of U.S. 250, a scenic byway. Committee members also said they were concerned about increased traffic.

Developer Kyle Redinger decreased the number of units from 93 to 80 and made 40 of them single-family detached homes — previously, all of the units were single-family attached — to lower the density and address some of the CCAC’s concerns.

The updated statement for the Board of Supervisors says the CCAC does not oppose development of the parcel but wants a lower density than 5.5 units per acre.

The committee briefly talked about Dominion Virginia Power’s plans to rebuild its transmission line in Albemarle and that efforts are underway to schedule a public hearing on the project.