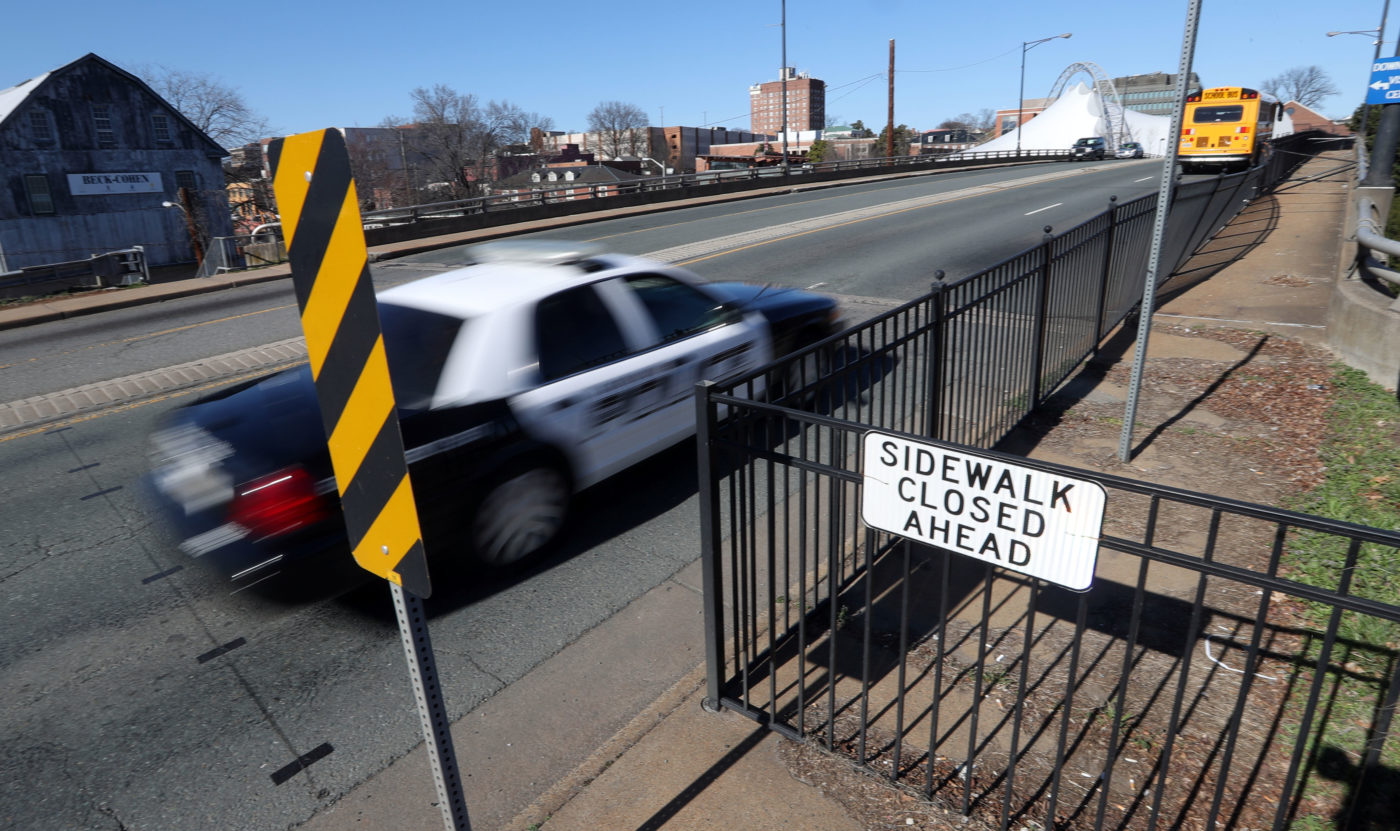 As work begins for a new Belmont Bridge, members of the design team spent Tuesday night ex-plaining the parameters and constraints involved in creating a replacement for the deteriorating Charlottesville structure.

“The Belmont Bridge was last rated at 40 on a scale of 100,” said Sal Musarra, project manager with Kimley-Horn. “That is not a good grade. Not for your children and not for a bridge.”

The existing bridge was built in 1961 and has been slated for replacement for several years. Crews will close the western sidewalk by the end of the month and will reroute pedestrians onto one of the southbound travel lanes.

A previous design process conducted by the firm MMM Design stalled after the company went out of business shortly after City Council made a firm commitment in the summer of 2014 to build a new bridge and to not tunnel underneath the railroad tracks.

The search for a new design firm officially began in November 2015, and negotiations with Kimley-Horn on the scope of the project resulted in a contract in late December.

“A lot of what we are starting with is in the request for proposals,” said Jeanette Janiczek, the city’s urban construction initiative manager. “[They are] to replace an insufficient and deteriorating bridge for vehicular, bicycle and pedestrian usage. To improve pedestrian and bicycle access … to improve aesthetics [and] to create a gateway to downtown from the south.”

Other guidelines in the proposal were to create a bridge that has one lane of traffic in each direction with a speed limit of 25 mph, reduce the span and include a 10-foot-wide sidewalk and a 10-foot-wide bike lane.

However, Kimley-Horn’s design could change as the public gets the chance to weigh in.

“This is the starting point,” Janiczek said. “Nothing has been absolutely determined.”

Musarra said Kimley-Horn must complete their design work by the end of March 2018.

“That’s a pretty tight, compressed schedule,” said Musarra, who explained that he is a landscape architect and not a bridge designer.

“We have a large team that includes bridge designers and structural engineers,” Musarra said. “Our approach from the beginning is that this project is about context and urban design before we even think about building a bridge.”

The steering committee selected Kimley-Horn because of its commitment to the public process.

Musarra said the team will spend six months getting input from the community in a series of public events that begin Wednesday and Thursday with the Tree Commission, the Board of Architectural Review, the Bike and Pedestrian Committee, the Planning Commission and the PLACE Design Task Force.

However, Musarra said the company’s charge is to build a new bridge and not to revisit previous alternatives.

“We’re not asking for consensus,” Musarra said. “For a complex project like this, consensus is not a goal.”

“What Sal is saying is that sometimes we have to agree to disagree, but the point we try to focus on is the positive,” said Stephen Stansbery, a vice president with Kimley-Horn. “One of the things you’ll hear from us a lot is to prioritize all the elements that need to be considered. It could be that we disa-gree about things that aren’t as high up on the priority list.”

“There was a lot of good that came out of that, and that’s what we want to focus on,” Musarra said. “You have identified what’s important to you about the project, and your fears and concerns.”

Stansbery said Kimley-Horn has worked on similar projects elsewhere in the nation.

“We’re not unfamiliar with the circumstance you’re in,” Stansbery said. “That doesn’t make it easier, but it does suggest there’s a path forward, and you guys should feel confident you’re going to get there.”

Steering committee members were asked to say what went well with the last design process, what did not go well and what lessons can be learned.

The representative from the Board of Architectural Review said the last design process did not seem to have order.

“Part of the problem is that there really wasn’t a process, and I think that’s where it ended up, caus-ing a lot of great deal of angst on the public’s part,” said Tim Mohr.

“The process began when they were already well into the design,” said Fred Wolf, representative from the PLACE Design Task Force.

A public event to gather input from a wide group of citizens and other stakeholders will be held March 11.

Stansbery said the goal is to get a design that can be built this time around.

“We’ve really got to ‘stick the landing,’” he said.