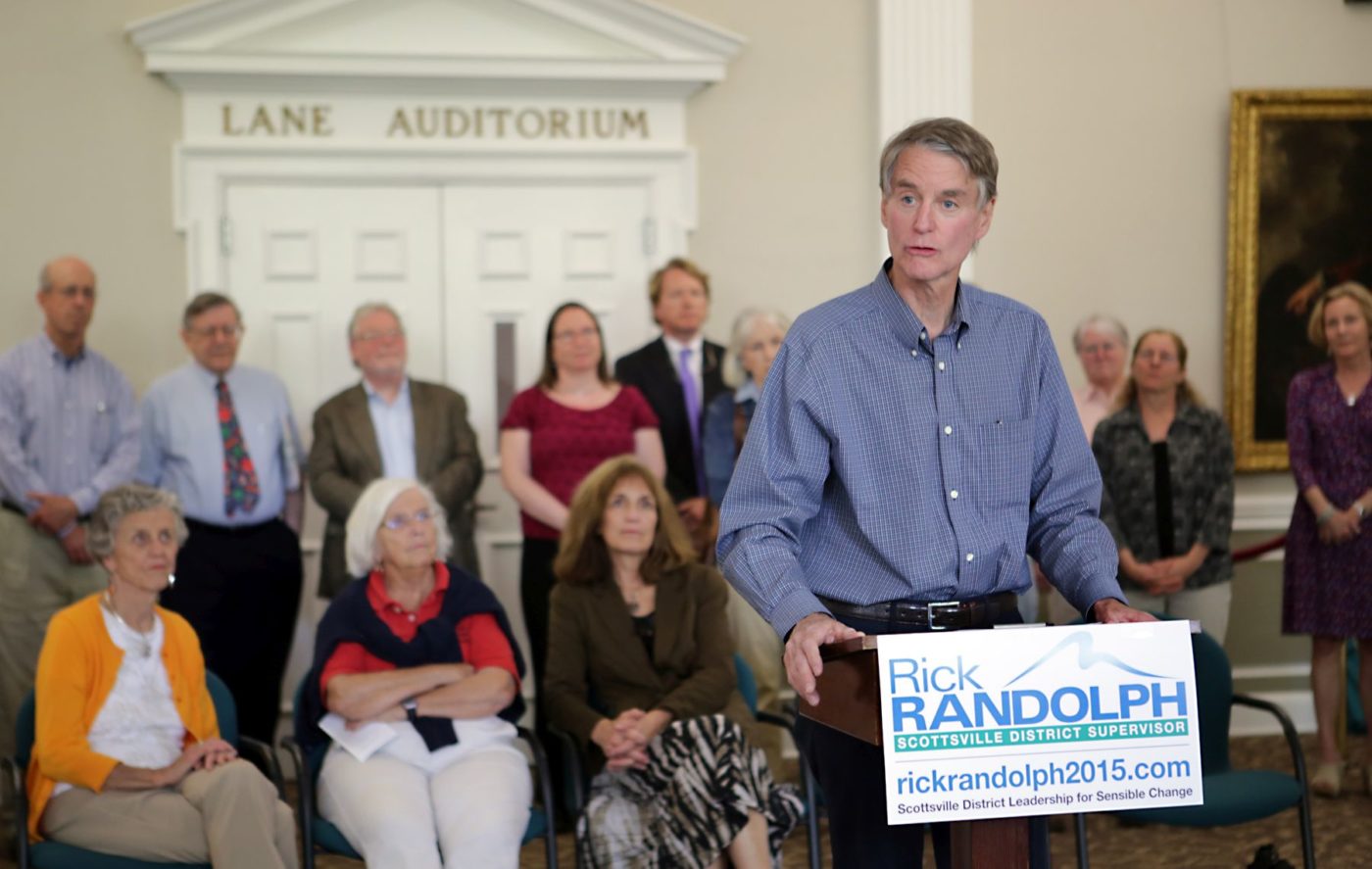 The man who represents the Scottsville District on the Albemarle County Planning Commission has announced his formal bid for a seat on the county’s Board of Supervisors.

“We will undertake together, in the coming months and years, [building] on the strong foundation of effective representation and budget-conscious leadership [provided by] previous Scottsville supervisors from Lindsay Dorrier to Jane Dittmar,” Richard Randolph said.

Randolph, 68, was appointed to the Planning Commission in January 2012 by then-Supervisor Christopher J. Dumler. When Dumler resigned following sexual misconduct charges in June 2013, Randolph applied for the interim position that was later filled by independent William Craddock.

At his campaign launch Monday, Randolph was surrounded by over two dozen supporters, including several members of the Planning Commission. Dittmar, who won the district’s special election in November 2013, introduced him.

“I met Rick for the first time in July 2013 when I was asked by some leaders in the Democratic Party to try to talk him into running for the Board of Supervisors,” Dittmar said. “It took me a little while, but here he is.”

Dittmar announced last week she would not seek a second term.

Randolph and his wife, Susan, have been Scottsville District residents for the past decade. He is the owner of Keswick Home Services and also is a member of the county’s Solid Waste Advisory Committee, which is seeking a long-term solution to trash disposal and recycling services. He has served as director of major gifts for Scenic Hudson, director of development for the Center for Preventive Psychiatry and the director of the Connecticut River Watershed Council as well.

“He brings not only an education background but also a nonprofit background, and he is a small-business person,” Dittmar said. “He has all those insights of what it takes in all three areas to make a vital community.”

So far, Randolph is the only announced candidate in the Scottsville District.

There is a three-way race in the Rivanna District for the seat being vacated by Republican Kenneth C. Boyd — Democrat Norman Dill is seeking his party’s nomination; Lawrence Gaughan is running as an independent after first running as a Democrat; and Republican Richard Lloyd has filed a statement of qualification with the registrar’s office.

Democrat Ann H. Mallek is the only announced candidate in the White Hall District. She is seeking her third term.

Cindi Burket, chairwoman of the Albemarle Republican Party, said no other candidates are ready to announce in the White Hall or Scottsville districts. However, she expects people to declare by the May 22 deadline to qualify for a June 1 mass meeting.

During his announcement, Randolph spoke about the difficulties he believes many Albemarle residents are facing.

“I’ve witnessed how challenging it is for my colleagues earning at or near the minimum wage to pay for essential repairs, for broken cars and affordable health care,” he said. “We must seek out on the Board of Supervisors creative solutions to growing our economic base while protecting our natural resources to enable the job prospects in the county to be more than the minimum and greater than dead-end.”

Randolph spent the morning at Cale Elementary School with Albemarle School Board member Steve Koleszar to take a tour.

“I learned that Albemarle County has twice as many children in poverty as the city of Charlottesville,” Randolph said “Our current housing policies are not keeping up with the demand for safe affordable housing in the county. We cannot afford to ignore these problems, but at the same time not all potential governmental solutions are affordable.”

Randolph said many people in the county feel disaffected by politics and he will try to connect with them.

“There is a real sense out there, whether in the streets of West Baltimore or in the urban ring of this very county, that forces beyond a single individual’s control are shaping personal destinies in ways with which people do not feel in sync and that are beyond their influence,” Randolph said.

“Even county government has become for them too complex, the language too obscure and the public discourse too personal and incendiary,” he added.

One of Randolph’s supporters is a fellow member of the solid waste advisory committee.

“I’ve really gotten to know Rick’s style and his ability to be very thoughtful and deliberative and look at all sides of an issue,” said Anne Bedarf. She added he is a consensus-builder.

“We don’t need any more divisive government,” Bedarf said. “We need to find good solutions that benefit us now and in the future, and Rick can help lead us down that path.”