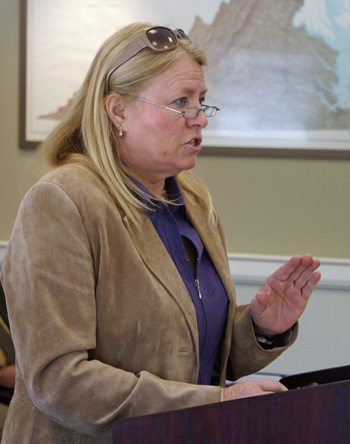 Crozet gas station design approvedSplit Architectural Review Board sends Crozet gas station to another work sessionRe-Store’N Station fails architectural review test
Construction of a controversial convenience store and gas station on U.S. 250 near Western Albemarle High School will begin before spring, according to a consultant associated with the project.
“The owner of Re-Store’N Station … is planning to start the site and road work in the next 30 to 60 days,” said Jo Higgins of Project Development Limited.
The decision to move forward comes just one month after an Albemarle Circuit Court judge ruled that the site plan the developer submitted violated the conditions placed on the project by the Albemarle Board of Supervisors.
The supervisors approved a special use permit for the project in November 2010. When an early design depicted a 7,000-square-foot, two-story building, some nearby residents had argued the gas station was too large and could have a negative effect on the Free Town Lane neighborhood and area traffic.
While the board did not place a size limit on the building’s second floor, it did restrict the building’s overall footprint to 3,000 square feet in order to prevent construction of an office annex that the developer wanted to eventually build.
However, the developer submitted plans to the county that depicted rental offices on the second floor. That raised the ire of the projects opponents and they complained to the county’s zoning department.
Ron Higgins, the county’s deputy zoning administrator, determined that the site plan was in “general accord” with the supervisors’ conditions for approving the special use permit.
The opponents appealed the decision to the Board of Zoning Appeals in a Jan. 10, 2012 hearing, but that body upheld the county’s interpretation.
However, Judge Cheryl Higgins overturned the Board of Zoning Appeals decision on Dec. 17.
The minutes for the board’s November 2010 meeting show that Supervisor Ann Mallek had asked that the board see the project again if the total amount of square footage was changed. That was enough to convince the judge that the developer did not have the right to the enlarged second floor.
“To comply with the court’s decision, the second floor area will be reduced from 1,915 square feet down to 1,000 square feet,” Jo Higgins said. “The first floor will have a partial cathedral ceiling. The building footprint and exterior design will remain unchanged.”
However, Jo Higgins said a second loading area would be added behind the building to allow for more frequent deliveries due to less space for inventory.
The owner of the property, Jeff Sprouse, said he will not appeal the decision and will move forward the project.
“We didn’t need [the additional space] anyway,” Sprouse said. “It was just for personal office space anyway.”
Sprouse said he hopes the gas station will be open this summer.
Jo, Ron and Cheryl Higgins are unrelated.