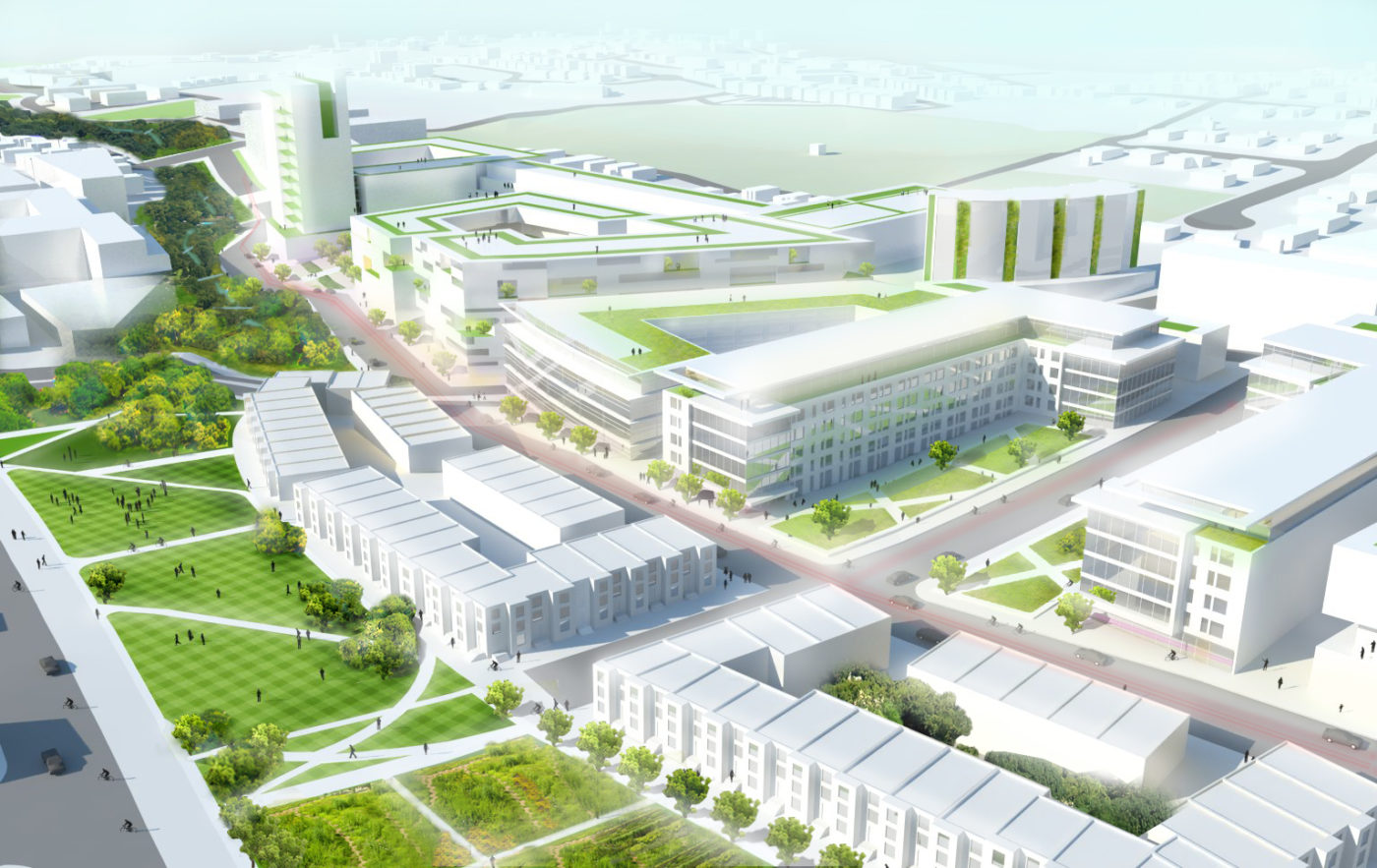 Charlottesville now has a bold new plan for the redevelopment of 330 acres around the Ix warehouse complex, Friendship Court and several public-housing sites.

Consultants from Cunningham Quill Architects made their final presentation to the City Council and the Planning Commission before an audience of about 30 people at CitySpace last week.

“This is one small part of the city and it can’t solve all of the city’s problems at once,” Galvin said, “but it’s going to solve all the problems for the community here. That’s the goal.”

“This is where it’s got to happen. It’s a test case for the whole city,” Galvin said.

Cunningham Quill’s 250-plus-page final report is a blueprint for what could happen over the next 30 years. One of the owners of the Ix property, Ludwig Kuttner, said the vision was critical to getting private investment.

“$300 million of investment creates $3 million in taxes for the city,” Kuttner said. “Let’s talk and work together with the city and with the council on making the big decisions for the future. $3 million can be spent on all kinds of things.”

“The proposed development in our plan is all oriented around the greenway,” said Adalie Pierce-McManamon, a Charlottesville landscape architect with OCULUS. “We see that park element as a real opportunity to create a central identity for this area and a central public park.”

Councilor Dede Smith said she liked the idea of the greenway but wondered about the potential for flooding if Pollocks Branch is brought back to the surface, a “pipeshed” that collects stormwater from much of the Downtown Mall.

“It’s a conceptual study, and one of the things we recommend as an immediate next step is additional study,” Pierce-McManamon responded.

Consultant Lee Quill said the property owners had been very engaged in the planning and are excited about the greenway.

The Piedmont Housing Alliance manages one of the affordable housing sites at the heart of the redevelopment project and greenway, the 150-unit Friendship Court.

Alliance board member David Oakland stood before the large panels of colorful renderings with a message for Friendship Court’s current residents.

“We want to make sure when they look at a drawing like this that shows their homes going away, that if PHA redevelops the site, those affordable units are going to be replaced,” Oakland said.

Likewise, a key goal of the city’s planning for the redevelopment of public housing has been “to rebuild and preserve” homes and revitalize the existing neighborhoods with mixed-use and mixed-income development.

Sixth Street resident Alelia Henry spoke during the public comment session and shared her skepticism about eliminating vehicular traffic through more accommodation of walking and biking.

“I haven’t seen a model of any place that’s undergone urban development where it’s worked,” Henry said. “The car is always going to be there and people are going to use it. I don’t like what we’ve done to Sixth Street where they’ve made it this big bike area.”

Kuttner suggested the community look at Amsterdam and Munich for prime examples of bike-friendly cities.

“It can be done. I think it’s the future,” Kuttner said. “If we think about energy policy long-term, we better go there.”

Quill said a goal of the plan was for the people living in the area to have less reason to drive their cars by having homes near jobs and services.

“There’s no way you are going to be able to build your way out [of the transportation challenge] … with wider and bigger roads,” Quill said. “The idea is to bring the city back to the people.”

Dave Norris, who leaves the council at the end of the month having championed numerous affordable housing initiatives, said bolder actions are needed.

“I think there’s a lot to like in this plan, particularly when it comes to design, but I think we have to ask how far does it go in helping us to accomplish our affordable housing goals … our goals for job creation and economic opportunity?” Norris asked. “I think we need to be bolder, I think we need to push harder. You are talking about using a whole lot of public land and public infrastructure to catalyze $300 million of economic activity.”

Norris said he wants to see more evidence that new affordable housing and new jobs would both be added to the community as a result of the plan.

One immediate question facing city leaders is how to proceed on the plan’s proposed “immediate actions” and “catalyst projects,” work proposed for the first year after the plan’s adoption by the council.

The plan suggests $5 million to $10 million in public funding, but no monies are included for implementation in the current capital budget under review by the city. Galvin said capital funds today are dissipated on spot projects for fragmented sidewalks and tree plantings, and that she would prefer a more strategic approach.

“I’ve already been talking to some fellow councilors and planning commissioners about putting money in the capital budget in a place-based fashion,” Galvin said. “I am going to push for it. That’s exactly what we need to be doing.” 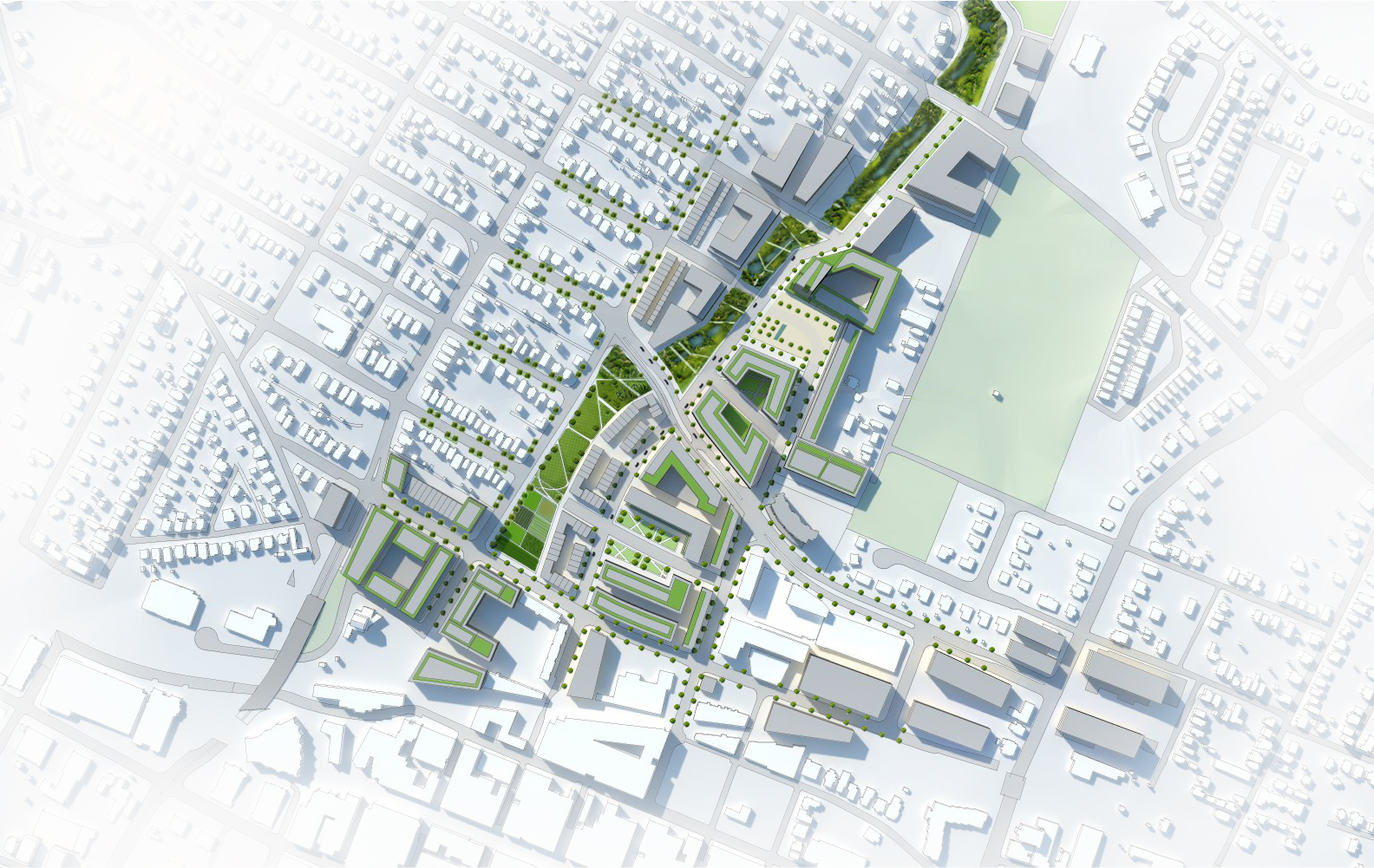