The Albemarle County Planning Commission faced two challenges Tuesday evening — a renewed request for a major residential development that it had previously discouraged and an auditorium full of frustrated residents determined to make sure undeveloped land in the Redfields neighborhood remains that way forever. 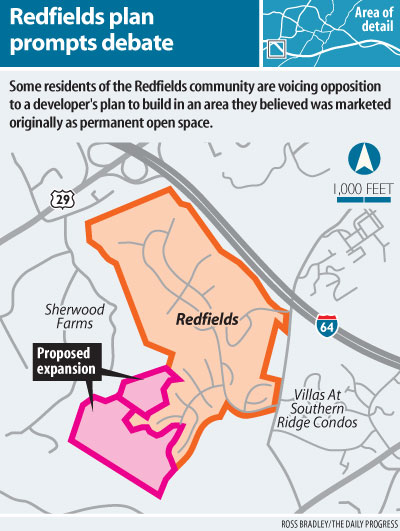 After a lengthy public hearing attended by 200-plus people, the commission voted unanimously to recommend denial of a rezoning request from local developer Gaylon Beights and the Redfields Development Corp. Commissioner Duane Zobrist recused himself from the meeting because of past representation of the applicant.

Beights petitioned the county to allow him to develop a 58-acre site for 126 new homes in Redfields . More than 20 neighbors reminded the commission Tuesday of promises they said were made that the land would be preserved as open space.

Catherine Cassety has lived in Redfields for the past 10 years. She said the plat for her home clearly labeled the land proposed for the new development as open space.

“When we bought our house, I did my due diligence,” Cassety said. “My agent called the Realtors and employees at the Redfields Development Corp. and they told us this would be open space. We should be able to rely on these public documents.”

“I feel like we are opening a Pandora’s box as soon as we start allowing rural areas to be developed by developers,” said resident Stephanie Polackwich. “We have a plan, we need to stick to it. The citizens and taxpayers of Albemarle County count on you to do this. You are the stewards of our lands and I hope you are taking that responsibility seriously.”

The proposed expansion of the Redfields neighborhood off Sunset Avenue Extended was recommended for denial by county staff. Located in Albemarle’s rural area, the project ran into trouble in large part because it would require an adjustment to the county’s designated growth area.

“The proposed residential development is inconsistent with the growth management policy and the rural area policies,” said senior planner Claudette Grant. “Staff recommends denial … because the residential use proposed is not in compliance with the Comprehensive Plan’s land use designation.”

Steve Blaine , an attorney with LeClair Ryan representing the project, said he thought the residents’ concerns were sincere, but unfortunate.

Blaine told the commission that the developers had consistently represented their intent to build on this part of Redfields in the future. The proposal includes new townhomes, detached homes, a playground area and basketball court.

Blaine said trails impacted by the development would be replaced and some acreage would be dedicated, permanently this time, as open space.

“We agree there is confusion about what open space means,” Blaine said to the commission after the public hearing. “Does there need to be a major re-education of our real estate agents? Yes, I think we have heard that tonight.”

“I cannot support this application,” said Commissioner Linda Porterfield . “I told the applicant on Friday that I didn’t understand why they were back in here because they were directly sent on a path by this commission … to be considered with all the other applications …to expand the development areas.”

The Planning Commission will start a comprehensive review of all the growth area expansion proposals in October.

Porterfield added that she did not think the Redfields expansion proposal was “in keeping with the character of the neighborhood as it has developed over 20 years.”

The Albemarle Board of Supervisors is expected to review the rezoning request at a meeting before the end of the year. The board will be asked to consider whether it should act on this request separate from the others included in the comprehensive review effort.