Albemarle County's high school boundaries. Currently, the division is collecting feedback from the community about redistricting.

Parents and community members continued Tuesday to offer their opinions on proposals that could see some Albemarle students switch schools at the start of the 2016-17 academic year.

The meeting marked the public’s second opportunity to comment on scenarios developed by the Redistricting Advisory Committee.

“This is an iterative process,” said Rosalyn Schmitt, assistant director of facilities planning for Albemarle County Public Schools. “No decision is final until the end [of the process].”

Fran Slayton, whose child will be transferring into the county schools next year, asked if the division had considered allowing as many as 200 families to redistrict voluntarily.

Schmitt said families have the right to petition to switch schools — with a “compelling” reason — but that the division doesn’t anticipate that option would provide adequate relief.

Jennifer Schaeffer, a parent of two children who attend Greer Elementary and a Special Education Advisory Committee member, said special-education students and their families could be negatively impacted by a move.

“It’s really a team that gets to know these kids, and it’s no small task in creating that,” Schaeffer said, pointing to the relationships special-education students build with support staff and administrators, in addition to their classroom teachers.

What’s more, Floyd said, is that moving children to Broadus Wood would make it difficult for families without transportation to pick up their child in the event of a medical issue.

Schmitt said those concerns are “part of the dialogue” the committee is engaging in.

Jeff Adams, a parent of students at Albemarle High, pointed to the different high school schedules as problematic for students.

Schmitt said the committee is aware of the differences, but that the capacity issue has reached the point of needing the redistricting study.

The redistricting conversations are the result of overcrowding at Albemarle High and Greer Elementary.

Currently, Albemarle High’s enrollment of 1,930 puts the school about 100 students over capacity. What’s more, the School Board has directed staff not to grow the county’s largest high school.

Greer Elementary is projected to be 80 students over capacity within five years, and schools officials have said that accommodating the three teachers the school plans to add next year to deal with growth will be a challenge.

During the first community meeting, major concerns included the emotional and academic impact a move could have on students, as well as a desire to keep English as a Second or Other Language students and special-education students in place.

Some also expressed a desire to move Albemarle High’s Math, Engineering and Science Academy to Monticello High. However, schools officials say that programming changes are outside the scope of the redistricting committee’s charge, and that it would be unlikely that a substantial amount of MESA students would voluntarily move to Monticello, as academy students are required to provide their own transportation if they live out of a high school’s district.

In the first scenario, 254 students who would be going to Sutherland Middle and Albemarle High would instead go to Burley Middle and Monticello High.

The first scenario for Greer Elementary could redistrict 99 students to Burley Middle and Monticello High, rather than Jack Jouett Middle and Albemarle High.

In this scenario, Broadus Wood Elementary’s free and reduced-price lunch population would jump from 16 percent to 33 percent.

Numerous parents asked if any students would be grandfathered. Schmitt said grandfathering students at their home schools would be decided by the committee, but that transportation would not be provided to students who opt to remain. Families would then be responsible for either transporting the child to school or to a bus stop that serves their school.

More information can be found at www.k12albemarle.org/redistricting. 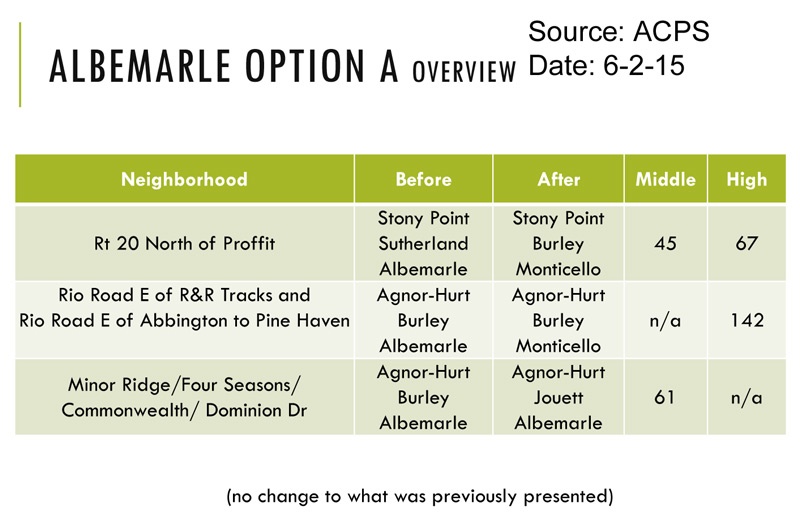 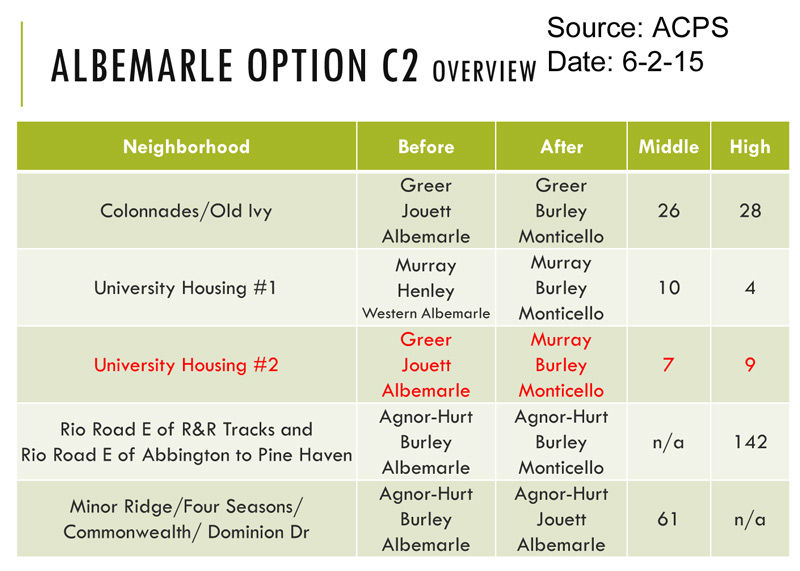 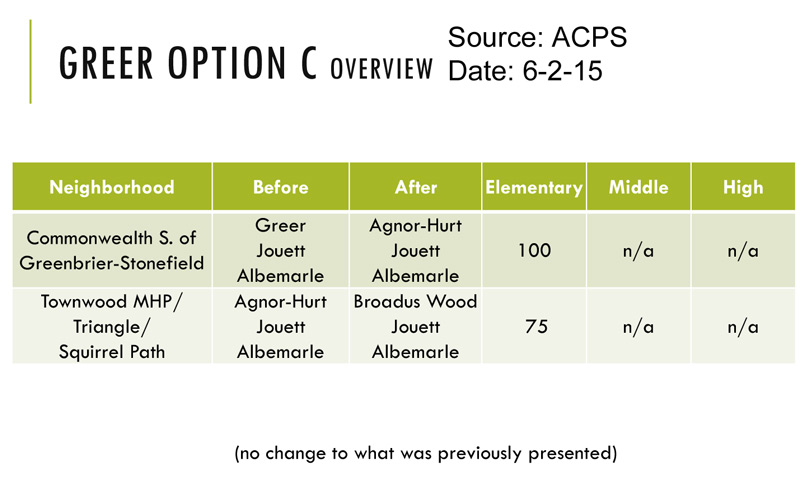 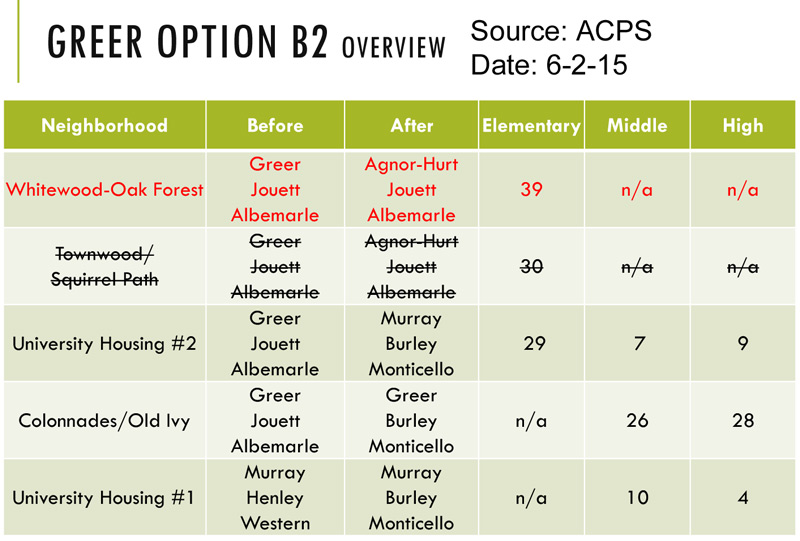 Our free, no-commitment newsletter delivers our latest local only headlines directly to your inbox, ad-free and paywall-free, giving you news on local topics you can use, share, and discuss. You'll also get invitations to Coffee Conversations and other in-person events on topics of local interest where you can interact directly with our journalists, local policy makers, and stakeholders. You care about local news - reimagine it with us.

Charlottesville Tomorrow is a non-profit news organization completely supported by foundation funding, grants, and private donations from readers like you. Every donation is used wisely to support our mission to deliver in-depth reporting and analysis that improves local decision-making.