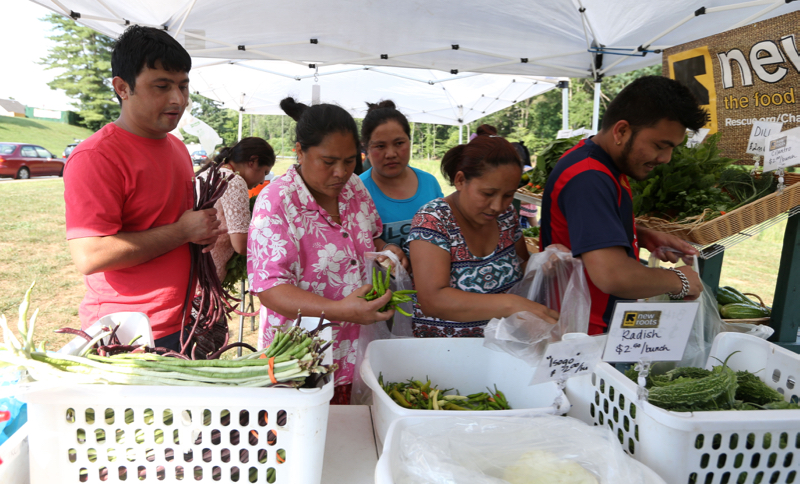 The Michie Market is held on Thursdays from 5pm - 6:30pm on Michie Drive.

A local food program is working to improve the lives of refugees in the Charlottesville area and provide them with access to nutritious foods.

“Maybe half of the people here are from farming backgrounds and so people were interested in having access to land to continue to get to do something that they knew,” said Brooke Ray, senior manager for the International Rescue Committee’s food and agriculture programs.

The IRC resettles approximately 250 people in the Charlottesville area each year and assists refugees, people seeking asylum, survivors of traumatic events and other immigrants from countries around the globe.

On a small 8-acre farm nestled against Moores Creek near Azalea Park, the IRC sponsors the New Roots program, in which refugees from countries such as Bhutan, Burma, Burundi, Ethiopia, Syria and Colombia have the opportunity to grow produce for their homes and to sell in local farmers’ markets. Refugees from Iraq and Afghanistan have participated in the program, as well.

Ray said the New Roots program originally started in San Diego, but has since been adopted in several cities around the country.

The IRC in Charlottesville started its New Roots program in 2010 with small gardens at apartments. It expanded the program by opening the Fourth Street Community Garden in 2011 and the New Roots farm in 2014.

In total, about 54 households and more than 150 people are involved in the program.

“We sort of started with that idea of community gardening as a way to give people a reconnection to the land, to make new friends. Then we started to realize really there’s more to it than that,” Ray said. “There’s potential for people to make a little bit of income along the way and learn some really important skills, but also just to support their own nutrition, to take healthy food home.”

Raymonde and her husband, Gasper, have been involved with New Roots for about three years.

Originally from the small central African nation of Burundi, they fled their home country during the Burundi genocide of 1972 and lived in refugee camps in eastern Africa prior to arriving in the United States in 2008.

Gasper got his citizenship last year and Raymonde got hers four months ago.

Speaking in Kirundi to her husband, who then spoke French to New Roots specialist Elizabeth Moore, Raymonde said she appreciates the banter she shares with her fellow farmers.

“She enjoys the fact that she can come to this garden and there are other gardeners who don’t speak the same language and they don’t really speak English that well, but they can have these little conversations by pointing to things and laughing and that they have these nice exchanges,” Moore said in translation.

Raymonde also said she likes that they are able to grow produce for traditional dishes.

“Since being in this program, they can either get leftovers after the market or when they want something they can go to their garden and cut it and then prepare things that are specific, traditional to their tastes,” Moore translated.

Pumpkins, corn and beans are some of their favorite things to grow.

Produce from the New Roots farm is sold at the Michie Market on Michie Drive on Thursday evenings and the first and third Saturdays of each month during the City Market season. New Roots farmers also sell their produce to local restaurants, including Orzo.

“We don’t use any chemicals,” Ray said while giving a tour of the farm. “We’re not certified organic but everything is organically grown.”

The New Roots farmers sell a mix of traditional market staples, such as peppers and tomatoes, and produce that is more traditional in other cultures, such as bitter melon and different varieties of eggplant.

“It’s that intersection between what there’s a market for, trying to fill the right niche in Charlottesville, so it’s a fairly saturated market in terms of vegetable production,” Ray said. “There’s a lot of really accomplished, experienced growers here, so more and more we’ve been trying to carve out space for farmers to be sharing more international and niche-type crops with the community.”

Ian Pasquarelli, a family and consumer sciences agent with the Virginia Cooperative Extension, was at the Michie Market with two interns doing cooking demonstrations for a fennel and fruit salad.

“Our main goal is to take fruits and vegetables that are being sold [in the Michie Market] and use them in a recipe and incorporate different food items — maybe food items [customers] may not be as familiar with and things that grow well here in Virginia — so we’ve got peaches here today,” he said.

Pasquarelli said he has partnered with the New Roots program for about three years and has worked to educate refugees about the American food system and encourage healthy eating.

The Virginia Cooperative Extension is just one organization partnered with the IRC and New Roots. The IRC works with Market Central to provide an EBT machine at the Michie Market and its other stands to help people on food stamps have access to local produce.

Bellair Farm CSA provides some additional produce to the Michie Market. The Women’s Initiative, the Adult Learning Center and the Bread and Roses Project also have worked with the IRC on New Roots-related programming.

“We’ve had many national and local supporters,” Ray said.

“Everybody here has a lot of knowledge and a lot to offer, and Charlottesville is such a big food community that it’s just really fun to connect people to new products and new people and bring kind of a new niche into the Charlottesville food scene,” Ray said.