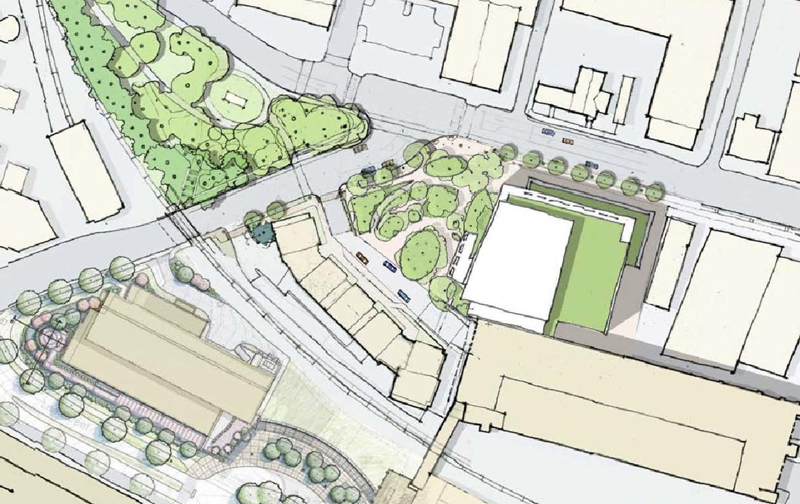 Credit: University of Virginia Office of the Architect

Increased density, construction at the University of Virginia and the Thomas Jefferson Planning District Commission’s Livability Study were on the agenda at the Planning and Coordination Council Technical Committee meeting Thursday.

PACC Tech is a sub-committee of the Planning and Coordination Council, a consortium of planners from the City of Charlottesville, Albemarle County and the University of Virginia, who discuss regional planning issues.

Among those projects is the Plaza at West Main, a 595-apartment complex that Tolbert says is scheduled to break ground in the next two weeks, and one that will begin to increase housing density along the West Main Corridor.

But Tolbert says that increased density shouldn’t come as news, and that he hopes city planners can make it a “complete street.”

“This is what we envisioned in the 2000 comprehensive plan,” Tolbert said.  “This is that we’ve planned for 15 years.  I’m excited about how we once and for all deal with what that street is and how we get bikes on it and pedestrians and we share the space with vehicles.”

A complete street is one that equally accommodates cyclists, pedestrians, public transportation and automobiles.

While Tolbert provided no specifics for traffic calming of pedestrian access, he also addressed the complicated intersection of Ridge Street and West Main.

“You’ve got two lanes coming in by the County office building, then you’ve got four lanes until you get across the bridge by the fire station then you go back to two,” Tolbert said.  “So I think we’ve got some opportunities there, particularly to improve the intersection at Ridge and West Main and Water Street.”

The Meadowcreek Parkway interchange, Tolbert says, is on schedule and will be completed in the next 2 years.

“Right now they are doing the major sewer line replacement, so there’s not a lot of road, but there’s a lot of trees coming out and a lot of dirt being moved,” Tolbert said.

“It’s not like going into the traditional type shopping centers that have opened in the county,” Cilimberg said, “but the parking is working in terms of people parking on the street, so the traffic is slowed, which is the intention.”

However, one aspect of Stonefield’s traffic plan that isn’t working as well is the intersection of Hydraulic Road and Swanson Drive, which has recently been partially closed for traffic safety.

“That is a matter that is under discussion between the developer and VDOT and we would imagine there’s some solution that’s going to result from that,” Cilimberg said.  “It remains to be seen at this point how that’s going to be ultimately addressed.”

Cilimberg also added that more construction is anticipated at Stonefield.

“The original site plan showed a lot more and there could be at any point in time more additional phases that would come in for development of tracks that are vacant now,” Cilimberg said.  “They even have some areas shown for buildings and parking structures.”

University of Virginia senior land use planner Julia Monteith highlighted some of the University’s current and upcoming planning projects.

The Battle Building on the corner of West Main Street and Jefferson Park Avenue will come down in May and will be replaced by a plaza, which will be completed by June 2014.

“It will make a much more generous space for the community at large,” Monteith said.  “One can see in the long term that there’s a relationship to [Clark Park] across the street.”

“There’s little green space in the Health System, so anything we can add back,” Monteith added.

The new plaza will sit beside the new children’s hospital.

The first phase of renovations to the Rotunda, which address the dome and skylight, is approaching completion, and Monteith says a second phase will begin in 2014 if all goes as planned.

“That project will include the porticoes, the roofs, the porches, the [column] capitals, the window and masonry repairs, total systems replacement, a new elevator and interior panels of the dome,” Monteith said.

The committee also received an update from the Thomas Jefferson Planning District Commission on the Livable Communities grant.

TJPDC executive director Stephen Williams said that while much of the public outreach portion of the grant has been completed, his staff is in “heavy production mode.”

“We’ve been working with city and county staff to orient the performance measurement system so that it relates directly with comp plans goals,” Williams said.

Williams also said that his staff is studying how the region’s long-range transportation plan will affect citizens and natural resources.

“We have a series of environmental performance measures that focus on water quality, air quality, natural habitat, historical and archeological impacts,” Williams said, “and we have some performance measures related to the way the transportation system is going to affect or support the economy and access to jobs in the area.”