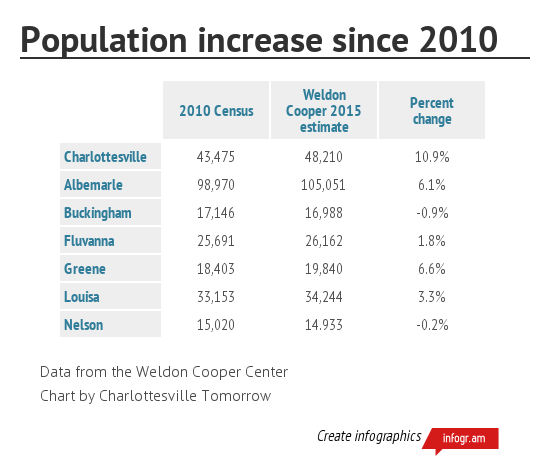 Virginia’s cities and urban areas continue to grow in population and one University of Virginia demographer said a contributing factor is that more people are choosing to rent rather than purchase their own homes.

“If you look at cities, they have much larger rental markets so they are more attractive as a result,” said Hamilton Lombard with the Weldon Cooper Center for Public Service. “More people have to go into the cities because they can’t get rentals out in the counties.”

New estimates released by the center this week show that populations in Albemarle County and Charlottesville follow a state-wide trend of growth in urban areas.

Weldon Cooper estimates that 48,210 people lived in Charlottesville on July 1, 2015 and that Albemarle County had 105,051 residents.

That means that Charlottesville’s population has increased at a 10.9 percent rate since the 2010 census counted 43,475 residents. That’s a 2.2 percent annual growth rate.

“For me these numbers are not a surprise because the City of Charlottesville is a destination and everyone that visits likes to live here,” said Alexander Ikefuna, the city’s director of neighborhood development services.

Albemarle’s growth rate is 6.4 percent since 2010 with most of that due to migration. That translates to 1.2 percent growth each rate.

“These estimates are in line with our expectations and reflect a continued steady but not explosive growth pattern as we have experienced for a number of years here in the county,” said assistant county executive Lee Catlin.

Lombard said changes in household demographics are likely responsible as well for the number of people seeking rentals as opposed to purchasing their own homes.

“You really haven’t had any growth in the number of households that have two parents, married or unmarried, and kids,” Lombard said. “That [demographic] is really one of the biggest drivers behind suburbanization.”

The statewide population estimate is 8,382,993 people, or a 4.8 percent increase since 2010. The biggest population gains are in northern Virginia with Arlington, Fairfax and Loudon counties all seeing double-digit growth rates.

“Cities have been better positioned to absorb that kind of growth,” Lombard said, adding that the Charlottesville’s decision in 2003 to rezone the city for high residential density plays a factor.

“Charlottesville wasn’t growing for probably about two decades before it made those changes,” he said.

However, Ikefuna said he understands that some current residents are bristling at changes.

“The increase in traffic resulting from the growth is stretching the patience of the residents,” Ikefuna said, adding that the city is currently looking to hire a new traffic engineer and is seeking solutions.

Ikefuna said affordable housing is another bigger issue that comes from growth with demand pushing up both rent and property values. He said a regional housing report that will be presented to Council on Monday could lead to greater collaboration between localities to increase the number of affordable housing units.

Buckingham County is estimated to have lost one percent of its residents since the last census with a population of 16,988. Fluvanna County has seen a 1.8 percent increase with a 2015 estimate of 26,162.

Greene County experienced a higher rate by 7.8 percent with an estimate of 19,840 residents.

However, Madison County’s population fell by 1.6 percent with an estimate of 13,099.

The center’s estimates are used by localities and state government for planning and budgeting purposes. They are based on an analysis of school enrollments, births, deaths and the number of driver’s licenses.

Catlin said the county keeps a close eye on the center’s annual estimates.

“An example of how population projections are used in our long range planning would be the recent school redistricting effort when the School Division’s Long Range Planning Advisory Committee is looking to see where new housing may impact the number of students projected for different school feeder patterns,” Catlin said.