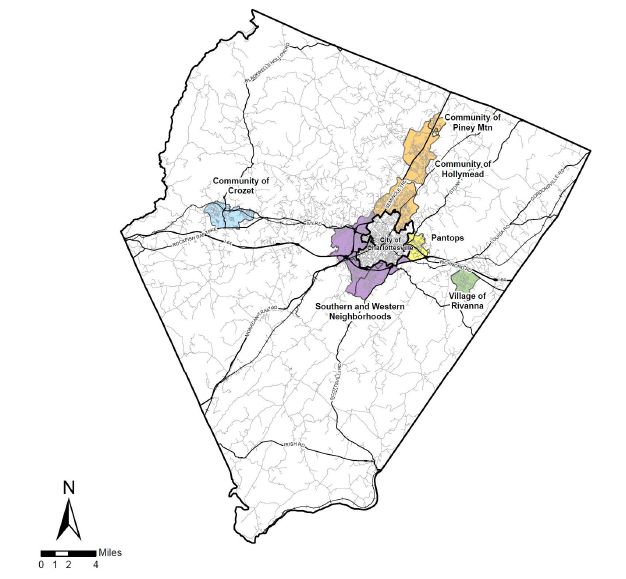 As Albemarle and Charlottesville consider spending plans for the next fiscal year, the city is able to devote significant resources to urban infrastructure, whereas the county is facing challenges.

While Albemarle has invested heavily in master planning projects over the years, its current capital budget has no new funding for their implementation.

In contrast, the city will spend one third of its capital budget on new sidewalks, undergrounding utilities and other urban amenities.

“For FY 15, we have over $5.28 million in these projects,” said Ryan Davidson, the city’s budget analyst, at a recent work session on the capital improvement program.

In contrast, of the county’s $39 million for new capital spending next year, only 5 percent of that amount will go to neighborhood development projects to help make the urban area a more attractive place to live and work.

That money will go toward four sidewalk projects and as-yet-undetermined projects that would be funded as part of the Virginia Department of Transportation’s revenue-sharing program. The Board of Supervisors formerly used that source for secondary road projects but has recently opted to apply it to sidewalk projects.

The 1970 Census found about 76,000 people living in the area evenly split between Charlottesville and Albemarle, around 38,000 in each locality. During the 1970s, Albemarle’s population grew to more than 55,000, while the city’s remained stable.

Today, Albemarle’s population is more than twice that of the city.

To protect the rural countryside, and the community’s watershed, from new housing development, Albemarle adopted a Comprehensive Plan in 1980 that divided the county into a rural area and a growth area, the latter occupying just 5 percent of the land area.

“By 2040, Albemarle County’s going to be at 150,000 [people], and Charlottesville will stay roughly the same because they don’t have room to expand,” said Russell “Mac” Lafferty, a county planning commissioner. “We want the infill [development] to be as high as density as possible to make use of the utilities and the roads.”

To guide that growth, the county has adopted four master plans that cover the U.S. 29 corridor, Pantops, Crozet and the Village of Rivanna.

However, the county’s proposed capital budget identifies no new funding to implement projects called for in those plans. For instance, one item that will be deferred is a long-awaited small area plan for the intersection of Rio Road and U.S. 29.

On the other hand, the Comprehensive Plan adopted by the City Council last year calls for small area plans, two of which are currently underway.

They are the “strategic investment area” in central Charlottesville completed by the firm Cunningham and Quill and the $340,000 streetscape of West Main Street.

The city’s proposed capital budget also includes $2.1 million in the next year to begin implementation of those plans.

“That’s money for design for whichever projects we decide to move forward,” said Jim Tolbert, the city’s director of Neighborhood Development Services, at the council work session. He said this could include street improvements or work to begin daylighting Pollocks Branch, a creek running underground near Friendship Court and the Ix warehouse complex.

Davidson said next year’s city budget even includes $300,000 to conduct another small area plan, though the council has not selected a location.

The small area plans are not the only areas of the city that are receiving attention in the capital budget.

Much of the work to design various blueprints for streetscapes in Charlottesville has been outsourced to one firm — the Toole Design Group.

As part of the SIA study, Toole is working on a $50,000 streetscape for Elliott Avenue near Oakwood Cemetery. Outside of that, it is developing a third phase of sidewalk improvements on Cherry Avenue for $50,000, and $31,000 to design a Safe Routes to School program for Clark Elementary School on Monticello Avenue. The firm also is working on a $50,000 plan to improve a crossing of Dairy Road over the U.S. 250 Bypass, and has a $20,000 contract for on-call planning and design.

To rely less on consultants in the future, the proposed operating budget for FY 2015 includes $85,000 to hire an urban planner who would work in the Department of Neighborhood Development Services.

“We’re restructuring how we’re doing a lot of our [work],” Tolbert said “All of the planning staff is going to be doing something a little different than what they’ve done to try to refocus the efforts of everybody.”

Though the county might be lacking in new funds, county planner Elaine Echols said the advisory councils that oversee each master planning area are playing a vital role in building community support for the growth areas.

“If there were no advisory councils, there would be no group that was overseeing the implementation and making sure the things that are being recommended in the plan are getting done,” Echols said.

For instance, Echols said the Crozet advisory council was instrumental in getting out information about the ongoing streetscape project and helped to raise funds to pay for books at the new $8.7 million Crozet Library.

“It evolved from the grassroots level,” Echols said. “I think we’re finding opportunities for volunteers to help us more.”

When the Board of Supervisors adopts a new Comprehensive Plan later this year, two new master planning councils will be created for the southern and western urban areas.

Echols said the councils would like to update their master plans to keep up with changing conditions, but the county does not have enough staff to do all of them at once.

“We aren’t geared up at present to manage multiple planning processes because we don’t have staff to manage more than one master plan at a time,” Echols said.

The county’s proposed operating budget includes $74,577 for a new “community engagement planner” to do that work.

But each of the plans contains projects that some say would have a positive impact on the quality of urban life, and these projects are unfunded.

“The huge challenge from day one is that we have a lot of things that need doing,” said Cal Morris, chairman of the county Planning Commission and a member of the Pantops advisory council.

These include crosswalks across U.S. 250, traffic calming on South Pantops Boulevard and other pedestrian improvements.

Morris said he has been trying to get members of the Pantops council to get “charged up” about infrastructure, but some are frustrated by the lack of resources.

“The only thing we’ve been able to take on is trying to improve the Rivanna River trails,” Morris said. “That doesn’t take any money.”

Despite little funding for new projects, several ongoing projects will carry over into the new fiscal year, including $4.5 million for a Crozet streetscape.