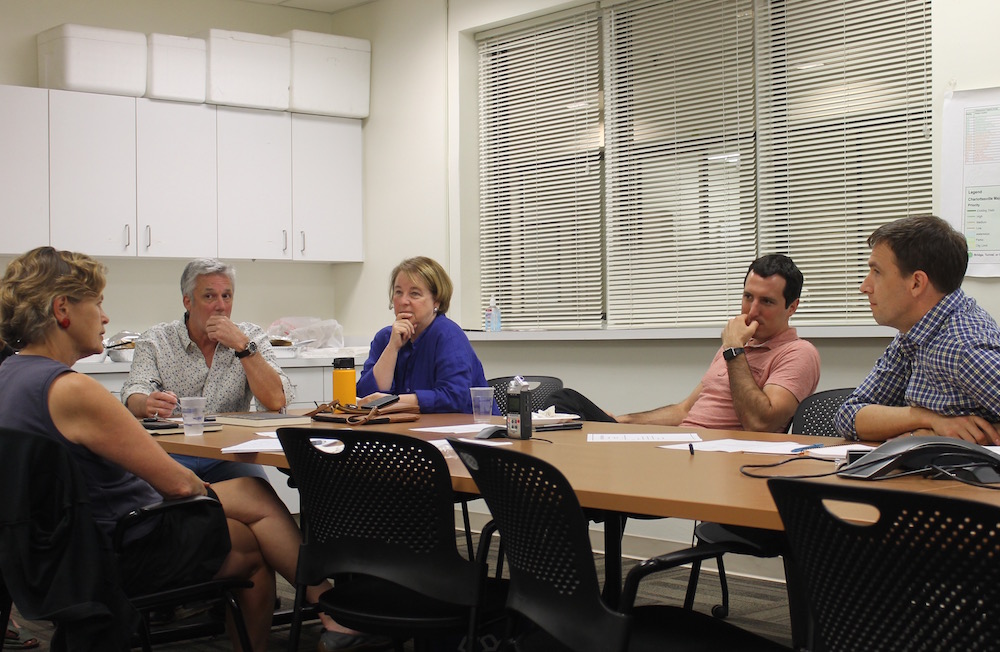 The Placemaking, Livability and Community Engagement (PLACE) Design Task Force, an advisory body for the Planning Commission and City Council, decided Thursday to move forward in attempts to conduct a cultural landscape review of the Downtown Mall.

Plans are in motion to secure funds for a study of Charlottesville’s Downtown Mall to evaluate its historic value and maintenance efforts and to suggest ways to better care for it.

The PLACE Design Task Force, an advisory body for the Planning Commission and City Council, decided at a recent meeting to seek the council’s support for this cultural landscape review.

“It is timely, as we have a mall that is approaching 50 years old, to assess all of its characteristics and its significance and its integrity, and what are the treatments moving forward?” said Genevieve Keller, a member of the city’s Planning Commissioner and PLACE.

Mike Stoneking, chairman of PLACE, agreed that a key piece of the report would be establishing methods for caring for the mall in its totality.

PLACE recommended such a report be completed in its last annual report, but did not include a timeline. At the recent meeting, held Aug. 10, the advisory body decided to bring a resolution before the council proposing the report be completed.

“It’s guaranteed it will come before council as a resolution,” Stoneking said in an interview after the meeting. “What happens from there will be entirely up to council.”

Stoneking is on the board of directors of Charlottesville Tomorrow.

An alternative plan would have been to request the $50,000 necessary for the report through the capital budget, which potentially could secure funds for the next fiscal year.

However, PLACE members expressed interest at the meeting in moving up the timeline due to recent discussions and city department actions addressing mall seating and trees.

Efforts to replace or add seating to the mall, which is technically a city park, have stalled, though many city leaders have expressed a desire to see changes. The parks department has requested funds for both short-term maintenance and long-term care of mall trees.

Paul Josey, a member of PLACE and chairman of Charlottesville’s Tree Commission, said new initiatives on the care of the trees don’t have to be carried out separately from other efforts on the mall.

“That should go hand in hand with the cultural landscape report,” Josey said.

Councilor Kathy Galvin, another member of PLACE, agreed that the parks department’s request for funding and plans to adjust mall tree treatment add a sense of urgency to planning a cultural landscape review.

Galvin said she will support funding of a cultural landscape report by the city’s historic preservation staff at the Department of Neighborhood Development Services in coordination with a tree management plan executed by the parks department.

“We’ve been hearing complaints from the public and the business community about the overall diminished quality of public space in and around the Downtown Mall since 2012,” Galvin wrote in an email to Charlottesville Tomorrow.

“This is a comprehensive way to address those complaints that makes sense.”

PLACE is recommending that the University of Virginia’s Center for Cultural Landscapes complete the report, along with input from a committee of city department heads and other constituents.

“All the departments that currently touch the mall will be involved in contributing to the report,” Stoneking said. “So when the report is finally written and recommendations are made, all those voices will have been heard.”

If the report is completed, implementation of its recommendations would come before the City Council for approval.

“If the report says things that council doesn’t have an interest in it, then they won’t implement all of it,” Stoneking said. “But if they believe in all of it, they’ll implement all of it. And then all those departments will be tasked with performing in accordance with the report, so it’ll probably affect everybody.”

PLACE discussed the coordination that will have to occur between multiple departments and advisory groups if plans for the report move forward.

“Parks does maintenance, so they’re the main player, I would say,” said Mary Joy Scala, the city’s preservation and design planner. “But they can’t do anything without [the Board of Architectural Review’s] approval, so the BAR would have to sign off at least on the plan, before they could implement it.”

Other involved departments include Public Works and Neighborhood Development Services, and historic preservation would be a consideration.

“There definitely should be one key person who is in charge of this,” Josey said, and other PLACE members agreed. It is yet unknown who would lead those efforts.

Some members brought up the existence of similar historic, pedestrian malls around the United States and plan to research whether those places have established plans similar to the one Charlottesville is considering.

Members agreed that the mall is a significant historical resource for the city.

“Next to the World Heritage Sites of Monticello and the University, this is our most important design resource in the city,” Keller said. “This is the point in time where we have to make a decision of whether we value that and we preserve it and rehabilitate it, or whether we do something different. Because if we go down the existing road much farther, we won’t have that resource to make that decision.”