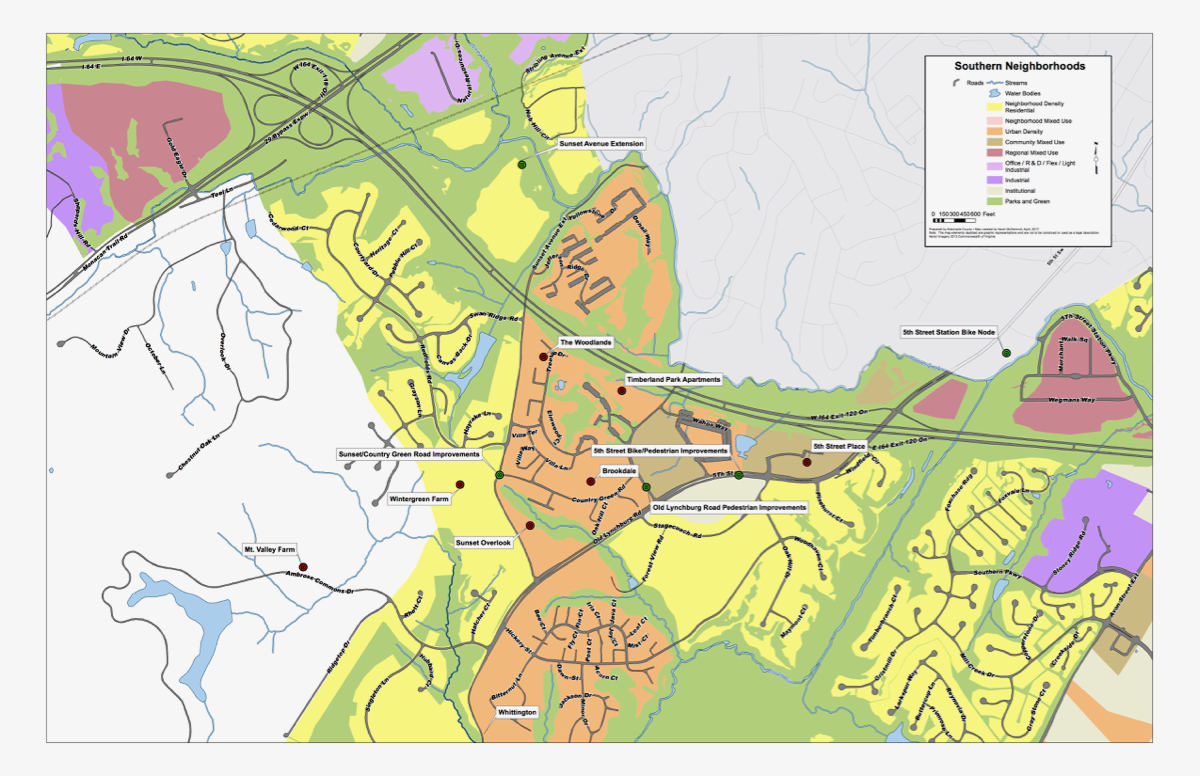 With almost 700 residential units coming to Albemarle County’s southern urban growth area, both county and city residents say they are concerned about accommodating the impacts of those new houses and apartments, many of which are in the vicinity 5th Street Extended and Old Lynchburg Road.

“There’s a lot under construction, and a lot pending … so I don’t know that we have felt or seen the impact of that additional growth yet,” said Rex Linville, co-chairman of the 5th and Avon Community Advisory Committee.

The southern urban area has seen a significant amount of activity in recent years with the opening of Wegman’s and 5th Street Station in 2016, as well as the submittal of numerous by-right residential development site plans.

But the existing neighborhoods and apartment complexes that have developed, such as Redfields, Jefferson Ridge, Eagle’s Landing, Cavalier Crossing and the first phase of the Woodlands, have put traffic onto streets like Sunset Avenue Extended and Old Lynchburg Road. Some residents say these roads are inadequate for the increased usage of cars, bikes and pedestrians.

“The people are correct — the infrastructure is not adequate, it’s very congested, a lot of the roads are unsafe for pedestrians and bikers,” said Liz Palmer, a Democrat who represents the Samuel Miller district on the Albemarle Board of Supervisors. “I think it should be a top priority of the county to make it a safer area.”

John Lowry, a Republican who is challenging Palmer in the November general election, said the conditions aren’t unexpected because the county made a decision to concentrate some of its growth in the southern urban area.

“We’re getting what we planned for,” Lowry said. “Back in the late [19]90s, the Supervisors talked about ‘How do we handle growth?’ and their suggested answer was, ‘We go vertical.’ And that’s what’s happened.”

“There’s trade-offs — you get good schools and you get good access to things that you need in your lifestyle, it’s just that you also can get congestion,” Lowry added.

Old Lynchburg Road crosses from Albemarle into Charlottesville and offers a convenient way for urban ring residents to get into the city.

“[Old Lynchburg Road] was not designed to accommodate the traffic that was going to be coming as all these developments are built out in the southern growth area,” said Fry’s Spring Neighborhood Association President Brian Becker. Fry’s Spring is located in the city, but lies along the border with Albemarle.

According to data from the Virginia Department of Transportation, the segment of Old Lynchburg Road between the city-county line and Jefferson Park Avenue has seen an increase in annual average daily traffic from 2,100 vehicles in 2001 to 3,800 in 2016.

The city’s most recent traffic study was conducted in front of Azalea Park in 2013.

Jeanne Chase lives on the city side of Old Lynchburg Road and is concerned about people speeding down her street.

“We have had one child killed, three children injured, too many family pets killed or maimed,” said Chase, on a recent tour of the area. “We have people that are taking our street of five blind curves as if it doesn’t matter that they pay attention to residential posted speeds and that is an issue.”

Becker said he would like to see more communication between the city, county and community members over these challenges.

“The neighborhoods that border the city are very sensitive to what’s going on out in the county,” he said.

Nearby, Sunset Avenue Extended faces some issues with its design.

“There’s an intersection at Country Green [Road] and Sunset Avenue Extended that has been the site of a number of accidents and there’s a hill involved, there’s a three-way stop sign, and there’s no shoulder,” said Sarah Mullen, who serves as president of the Redfields Community Association board. “I think people are concerned about, if that’s already sort of a bad intersection, it can only get worse with increased traffic and more and more folks trying to use it.”’

County transportation engineer Kevin McDermott said he is aware of the infrastructure concerns in the Old Lynchburg, Sunset and 5th Street areas. A community meeting in April focused on this part of the county.

“We’ve heard from a lot of residents down in that area and it’s definitely on everyone’s mind,” McDermott said.

In 2015, the county submitted an application to a state transportation program to get funding for improvements along Sunset Avenue Extended that would have installed curb and gutter and a shared use path along the length of Sunset. That project had an estimated cost at $15.7 million and ultimately was not supported.

“Some new [residential developments] have come along that have made some of the improvements that we were looking for along there,” said McDermott, in reference to road improvements anticipated near developments at Sunset Overlook and Wintergreen Farm.

He said the county may submit another application in the future to the state’s Smart Scale program in hopes of receiving funding for improvements on Sunset Avenue Extended north of the intersection with Country Green Road.

One idea that’s been proposed and extensively studied as a way to alleviate cut through traffic on Old Lynchburg Road is a connection between Sunset Avenue Extended and Fontaine Avenue.

However, this road could come at a high cost.  A previous analysis cited in the county’s Southern and Western Urban Neighborhoods Master Plan estimated the connector could cost $30 million. Given this expense, as well as hopes that a part of the connector would be built with the future development of the Granger property — a 69-acre parcel situated off Sunset — it’s unclear when this connection will be built.

A separate road linking Redfields and U.S. Route 29 through the Sherwood Farms neighborhood has also been floated as a potential way to improve connectivity in this area of the county. This idea is based on a 2001 proffer created in a rezoning for a phase of Redfields, but has seen little progression.

In the meantime, a few smaller projects are underway to address some of the connectivity and congestion issues near Old Lynchburg Road and 5th Street Extended.

“We don’t have a lot of options for alleviating the traffic [on Old Lynchburg], except we are continuing to pursue bike-ped connections into the city from there,” McDermott said. “And we have a number of projects including connecting  … to the Azalea Park and the Rivanna Trail network, so that some people may want to use that to bike or walk in.”

McDermott said there are some visibility issues at the Old Lynchburg and Sunset Avenue and Old Lynchburg and 5th Street Extended intersections, and said the county is working with VDOT to look for ways to improve safety.

The county is also currently renovating a walkway from 5th Street Extended to Doncaster Lane, and providing a crosswalk to the Region 10 building.

Supervisor Rick Randolph represents the Scottsville district, which includes a portion of the county’s southern urban area. He said he thinks there has been a shift toward looking more at the urban ring of the county.

“We’re a rural county, we’re a suburban county and we are an urban county — we have all three dimensions,” Randolph said. “This board is really coming to grips with it, because where the board’s priorities are, are Rio-29 and urban redevelopment and revitalization.”

Albemarle is currently creating a small area plan for the Route 29 and Rio Road intersection.

Palmer also noted the board’s ongoing work with Route 29 and said she hopes the southern urban area is “the next big place to really address.”

Looking forward, Linville emphasized a need for investing in infrastructure and thinking about ways for the county and city to work collaboratively.

“As we continue to grow in the southern neighborhood, we need to be making a community investment in more interconnectivity,” Linville said. “We need to build those inter-neighborhood connections with roads and we need to invest in bike and pedestrian infrastructure so people have multiple ways of getting places.”

As residents talk about amenities and infrastructure, Randolph said he thinks it’s important to keep the costs in mind.

“It’s a question of what kinds of services can the board provide at what level of taxation,” Randolph said.  “We can provide all of these services, but should everyone in the county pay for these services when the beneficiaries are in a localized area? Or should those services be paid and covered with a special [tax] district?”

Randolph said he was open to discussing the possibility of special tax districts with the board, but also noted he would want to see more public input on the issue as well.