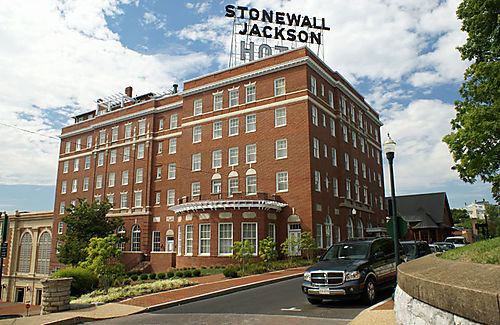 held a two-day retreat at the Stonewall Jackson Hotel in Staunton, VA.

told Charlottesville Tomorrow that he felt like it was a very positive meeting.  “The retreat was a good process that will help us focus our energy and resources for the next couple of years on several strategic priorities,” said Norris.

said if the group understood their own personality traits, as well as those of their colleagues, they could build better working relationships.

In this specific exercise, there were four potential personality profiles and Mullaney was happy to see that City Council members and staff were represented in each of the four groups.  In addition to a balance of personalities, Mayor Norris sees the current City Council as possessing other strengths.  “This is a council that is very thoughtful and serious.  It works well together, even though we don’t always agree.”

In the course of the retreat, Council members talked about how they think they are sometimes perceived as being of one mind on many issues given that they are all from the same political party.  One councilor noted that despite being an all Democratic Council, they often do not vote unanimously on an issue.

The participants in the 2008 Charlottesville City Council retreat included: 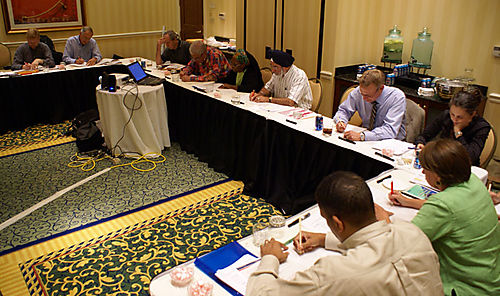 Jeanne Cox, Clerk of the Council

Mayor Norris said Council has a tradition of holding retreats outside of Charlottesville. “It is good to get away, but not too far away,” said Norris.  “A little distance allows us some mental space to think big.”

Thinking big was the emphasis of Saturday’s all-day session.  Facilitator Skip Mullaney conducted a “dot exercise” that allowed councilors and staff to assess how the City was  doing on the eight major goals of

.  In advance of the retreat, Councilors received a ten page summary of the goals and the strategies being pursued by City Manager Gary O’Connell and his staff.

Mullaney had the group place a dot on a poster-sized target for each of the goals to measure City government’s level of impact and engagement.  Goals with the most “hits” in the bull’s eye included efforts to make Charlottesville a “green” city and work supporting arts and culture.  The participants scored “Quality Housing Opportunities for All” as missing the mark the most.  There was little to no discussion of quantitative measurements for assessing progress on the strategic plan.

After the self-assessment of their current vision and goals, Mullaney moved the group towards brainstorming on priorities for the next two years.  Staff and council identified a group of about thirteen major priorities.  While the new priorities didn’t necessarily have to be aligned within the current vision in this exercise, there was consensus that the Vision 2025 strategic plan was a positive and forceful guide for their work.

After a lunch break, another “dot exercise” evaluated which priorities would receive “votes” from at least three City Councilors.  Those that did receive a majority vote made it to the final list of seven priorities identified for 2008-2010.  The new priority list below has three tiers grouped by the number of “votes” received by City Councilors.  Tier I priorities had the highest number of votes.


NOTE: City staff will revise the exact wording of these priorities over the next month.  The draft language shown below is Charlottesville Tomorrow’s best effort to capture the discussion at the retreat.

[Update 9/8/08 – 1:15 PM: Mayor Dave Norris wrote Charlottesville Tomorrow to emphasize that this priority “revolved primarily around expanding affordable housing overall (no new units of which are expected to be publicly owned or managed).”  This item has been slightly revised to reflect that understanding.]

—Recruiting and retaining a diverse workforce; Improving race relations in the community

(and mobility)—Expand and “revolutionize” public transit in City and County; Pedestrian and bike friendly City 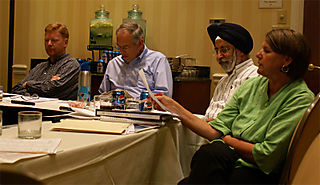 Mayor Norris told Charlottesville Tomorrow that the retreat met his expectations.  “It did.  I was looking for an action agenda for where to focus our efforts,” said Norris.

Next, Gary O’Connell and his staff will summarize the feedback collected at the retreat and submit it to Council in October.  A number of the priorities are already part of the City’s work plan and have reports coming soon to Council, including a discussion on September 15th related to housing priorities and a forestry master plan coming later in 2008. Norris encouraged staff to develop a tracking mechanism to measure progress and provide periodic updates to Council.