Couple launching business to get people and community onto Rivanna River 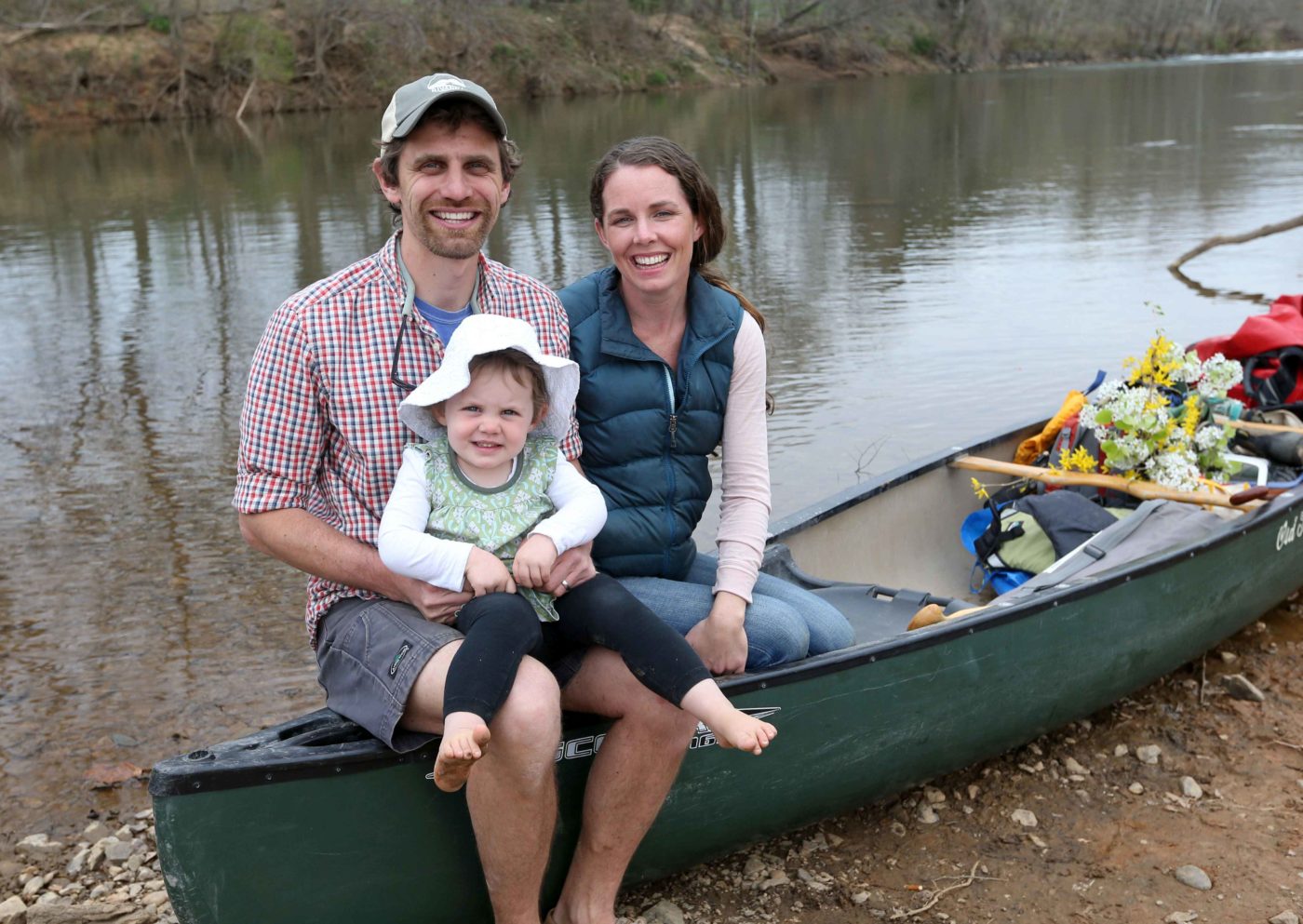 Gabe, Sonya and Willow Silver of the Rivanna River Company

A husband and wife are embarking on a journey this spring to help Albemarle and Charlottesville residents launch their own trips on one of the region’s most natural settings.

“Our long-term vision is to be a part of connecting the community with the Rivanna River in a way that makes the river more of a highlight for the area,” said Gabe Silver, who formed the Rivanna River Company with his wife, Sonya.

“You can have an adventure and a unique experience without flying or driving far away,” said Sonya Silver.

In addition to renting of kayaks, canoes and stand-up paddle boards, the Rivanna River Company will offer guided trips and shuttle service back to town when clients complete their trips.

The couple was inspired in part by the elevated presence of the Rivanna River in the recent updates of the Albemarle and Charlottesville Comprehensive Plans. Both documents now identify the waterway as an area for joint planning.

The Thomas Jefferson Planning District Commission is coordinating those efforts through an initiative known as the Rivanna River Renaissance.

“Recreation, water quality, environmental [protection] and proper development along the river are all very important to the long-term health of the river and community,” said Chip Boyles, the TJPDC’s executive director.

The Silvers hope to make part of their living by helping draw attention to the waterway.

“For something like the Rivanna Renaissance to work, it’s got to harness small business, and not just our business,” Gabe Silver said. “As an outreach manager for the James River Association, I was involved with water trail efforts and river corridor planning. In the places where stuff worked, there was a small business like an outfitter that had skin in the game.”

A survey conducted in 2011 by the state Department of Conservation and Recreation found that 46 percent of Virginians want more public access to state waters for canoeing and kayaking.

The Silvers want to meet some of that demand by taking people onto the Rivanna.

“Our long-term vision is to create a hub that’s a place where people can gather and get information about the river, rent equipment along the trail and river system and potentially get a bite to eat and hang out in the outdoors,” Gabe Silver said.

Their arrival on the scene has been welcomed by the head of a nonprofit devoted to stewardship of the river’s health.

“Having the Rivanna River Company here in Charlottesville to share our beautiful river with those who live in our area and those who may want to visit is a tremendous asset,” said Robbi Savage, executive director of the Rivanna Conservation Alliance.

Savage said the new business will expand the number of people who get to experience what the Rivanna has to offer.

“Over the years, we have hosted biennial Rivanna Sojourns, and we love doing paddles for our community,” Savage said. “But as a small nonprofit, we are not in a position to serve the public in a way that accommodates their individual schedules and needs.”

Woolen Mills resident Bill Emory played in the James River while growing up in Richmond. He said he is hopeful the Charlottesville community can accomplish what the state capitol has done with their natural resource.

“The area was vastly underused by the general populace and signs were posted, saying, ‘Stay out of the water,’” Emory said. “The city of Richmond since then has turned back to the James, built a nationally recognized river parks system and has taken huge economic advantage. Now it is the play-ground for many people in the city.”

Emory knows the Silvers and hopes their work can help fulfill a passage in the Virginia Constitution that deals with conservation issues.

“It shall be the policy of the Commonwealth to conserve, develop and utilize its natural resources, its public lands and its historic sites and buildings,” reads Article XI of the document.

The prospective developer of the Woolen Mills building at the Rivanna’s confluence with Moores Creek wants to accomplish at least two of those goals. He supports the idea of a small business utilizing the river.

“I think an outfitting company would be a great fit for this property, given the substantial frontage on the Rivanna and the ability to show off a treasured asset in our community,” said Brian Roy. “Giving residents another opportunity to engage in outdoor activities is really attractive from a personal and business perspective.”

Roy plans to redevelop the 100,000-square-foot former mill building as a mixed-use structure.

The Albemarle Board of Supervisors last year gave preliminary approval to allowing more residences on the site but it has to persuade the Federal Emergency Management Agency to amend its flood maps before he can proceed.

“I grew up on the Rockfish River in Nelson County and spent my childhood playing outside. I want our 2-year-old, Willow, to have the same quality of experiences,” she said. “I want that for all our friends’ children and for the community to have local ways to have adventures in nature.”

Gabe Silver is a graduate of the Charlottesville Investment Collaborative and took part in last year’s Tom Tom Founders Festival pitch night. While he didn’t win, connections were made that helped the couple decide to take the plunge.

On guided tours, the Silvers will offer history lessons and point out wildlife. Thomas Jefferson had tried to find a way to make the Rivanna River navigable to get agricultural freight out to Richmond via flat-bottomed bateaux.

“You can see the remains of dams and some locks, some of which are quite intact,” Silver said. “Some of this stonework, you’re like in a Mayan jungle, and you look and you see these stones and they have masons marks that are chiseled into them.”

Sonya Silver said business will be tailored to families who want to spend more time together.

“While outdoor recreation is a great vehicle for this, there are many barriers,” she said. “A lack of access to equipment, lack of knowledge and skills, and logistics issues can make the prospect of a river trip seem like a headache.”

Gabe Silver said he anticipates about two-thirds of the business will be through rentals and shuttle services with the rest coming from guided trips and other programs. The company will operate as a mobile business this year but hopes to establish a permanent location in the future.

Through April 11, the company is conducting a crowdfunding campaign to help buy additional equipment.