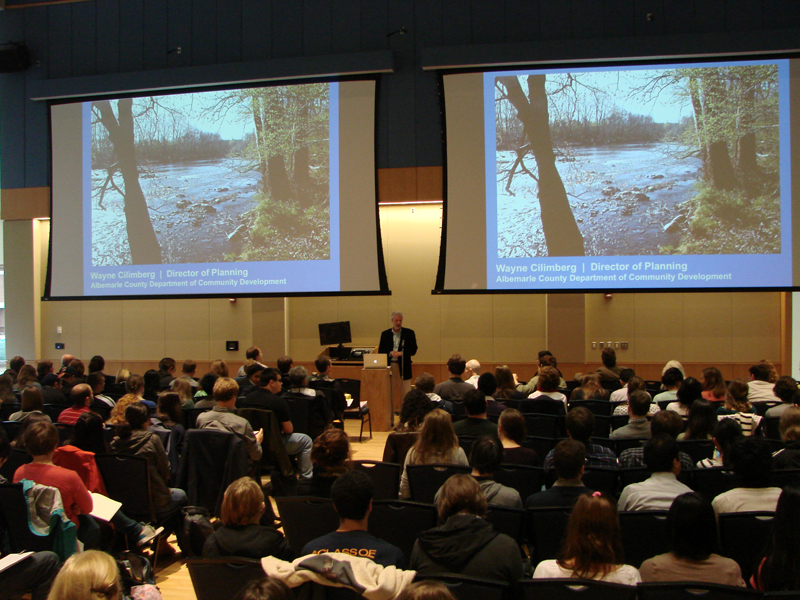 Nearly 400 students from the University of Virginia’s School of Architecture will spend the next week re-imagining the Rivanna River corridor from Pen Park to Woolen Mills. They filled the Hunter Smith Band Building on Monday for a lecture kicking off the Rivanna River Vortex design competition.

Throughout the week, 30 teams of 12-14 students will design plans for the three-mile stretch of riparian land, and each team is required to produce a scale model of their schemes.  Judges will choose the winning submission on Sunday.

Renowned architect and visiting professor Adriaan Geuze, whose projects include Governors Island Park in New York and the metropolitan park Madrid Río in Spain, will offer advice to teams throughout the week.

Many of the students involved, such as third-year architecture student Kaitlin Gerson, look forward to the opportunity to apply their coursework to the community.

“Whereas in class we’re going through the design process, this is applying us to a real project,” she said.

“In our courses we work with our classmates, but here we’re being placed on teams across grades and experience,” said third-year architecture student Arnold Lee.  “This experience will help us learn about teamwork, just as we would at an architecture firm.”

During the two-hour opening event, students at both the graduate and undergraduate levels heard speakers present on river-related issues, including the local planning context the city and county face, water quality and the Rivanna’s cultural and historical significance.

City neighborhood planner Brian Haluska challenged students to propose solutions for many of the city and county’s planning questions.

“There has been a struggle about how we incorporate the natural amenity [of the river] in our planning,” Haluska said.  “[Do we use the river for] recreational uses only, only environmental uses … or does it become an economic use?  It seems like the opportunity for all three of those exists here.”

Albemarle director of planning Wayne Cilimberg encouraged students to engage with the city and county’s comprehensive plans, and offered a view of the competition from the perspective of the Livability Project.

Through the current city and county Comprehensive Plan updates, both localities have identified the river as an area for future cooperation.  Moreover, many citizens expressed a desire to see some form of river development through their input to the Thomas Jefferson Planning District Commission’s Livability Project.

Cilimberg also encouraged students to think about personal property rights and the homeless, as well as recreation and transportation.

“Make the river a feature while maintaining the privacy of the individuals,” Cilimberg said.  “You’ll have to work with the neighborhoods, and you’ll have think about property and business owners, but don’t assume that the businesses that are there are going to go away.”

Rivanna River Basin Commission executive director Leslie Middleton highlighted the key points of the commission’s Rivanna Watershed Snapshot, and reminded students not to overlook the effect on the environment development can have on the river.

“Think about the watershed in relation to the human and ecological communities,” Middleton said.  “The Rivanna has a state scenic designation and it’s classified this way because of [among other factors] a lack of visible buildings or breaks in vegetation, so there’s a tension there between how the state designates the river and what we might want to do there.”

“What would it be like if we left some of wildness of our river places in any designs or considerations of how we live here in our modern context in relation to the river?” Middleton asked.

“If you want to be a sustainable builder or green urbanist, you have to think of the species that have been here since before Jefferson or the Monacans,” Richter said.  “When you think about metrics or indicators of your success going forward, the health of the species has to be included.”

UVa professor of architectural history Daniel Bluestone tasked students with the goal of creating designs that highlight the river’s cultural and historical significance.

As for what the river used to mean to Charlottesville and Albemarle, Bluestone noted its past functionality, such as transportation, trade, electricity and the presence of royal land patents that once lined it.

“[The river] is an essential part of our life that for the last many years has been absent from our understanding,” Bluestone added, “but people have the power to create special places even when the use has disappeared.”

“One way is that an issue is so contested that you can’t reach a consensus, but the other is an inability to imagine something you’ve never seen before,” Meyer said.

And it is that sense of imagination Bluestone said he and his colleagues hope to foster this week.

“We wonder, in this competition, whether it’s possible for you to imagine places that will both capture the imagination and coalesce and bring together the community,” he said, “not simply for a little walk detached from the rest of the city, but as something that becomes the warp and woof of the Rivanna River and our community.”