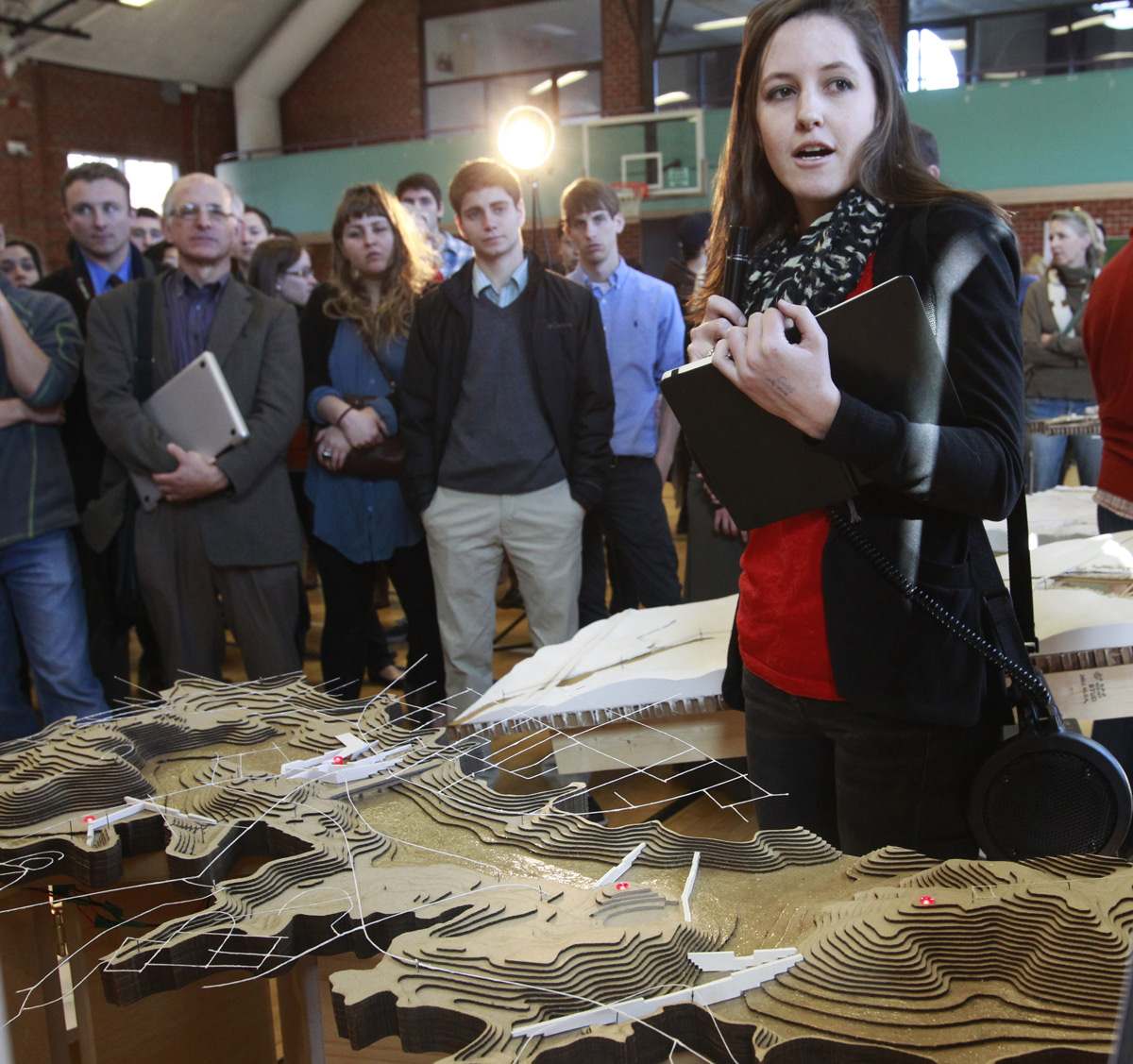 After a week of intense drafting and design, the Rivanna River Vortex concluded Sunday at the Key Recreation Center, as all 30 teams presented their schemes and judges circled the gymnasium evaluating the submitted plans.

“I’m very happy with the engagement of the students and their mindfulness of the ecological factors, but also [their ability] to be creative and to be reactive to the existing conditions,” said Iñaki Alday , chair of the University of Virginia’s School of Architecture.

“Even if [development] of the Rivanna is far away, the evolution of the city should embrace the river and the river should become an important part of the city,” Alday added.

Similar to the design competition for the Belmont Bridge, the Rivanna River Vortex sparked a community design conversation that questioned how our population uses one of its places, and how we might improve the design of that place.

In this case, UVa tasked about 400 architecture students to create plans for the Rivanna River waterfront — from Pen Park to Woolen Mills — that would foster connectivity between Charlottesville, Albemarle County and the river.

Judges presented four awards: the Adriaan Geuze Award, which delivered a cash prize of $1,000; the Students Award; the Faculty Award; and the Public Award, the last three of which came with a $500 cash prize.

“It’s thrilling to see the results,” said architect and visiting professor Geuze. “If you zoom out, every group is capable of making a narrative concept.”

The winning design, titled Sound Crater, celebrates Charlottesville’s music scene and establishes the Rivanna at the heart of it.

The scheme envisions a series of small craters on the city and county sides of the river, as well as one large crater, serving as an outdoor amphitheater, at the north end of Riverview Park.

“The Sound Crater reinterprets the historic Woolen Mills as a cultural center based in music education, live events and improvisation,” the winning team wrote in its abstract.

“At the foot of Monticello, where Thomas Jefferson built a legacy on a mountaintop, the Sound Crater celebrates the river valley, from which the city was built.”

“There is no doubt that this is it,” Geuze said of the winners. “The project has simplicity, is deep … has elements of ecology, and it has beauty that is relevant.”

“There is a golden future for you if you continue this kind of work,” Geuze said to the winning team members.

“We looked at Charlottesville and asked ourselves what it needs,” second-year graduate landscape architecture student and Sound Crater team member Katherine Cannella added. “I’m honored to have had the chance to work with a diverse group and to have been under such great tutelage.”

One local official noted the Rivanna Vortex was a UVa program, and that the winning project will not necessarily be adopted by the city and county and constructed.

“This is a university class project,” said Albemarle Planning Commissioner Russell “Mac” Lafferty. “It gives us the opportunity to see the project in different ways, but we’re not obligated to adopt any of the designs, and anything that does happen will go through public hearings.”

Numerous students mentioned how the Rivanna Vortex challenged them to grow as designers.

“The competition made me think about the community at a larger scale because the river is a place that neither the students nor the community are familiar with,” said second-year graduate architecture student Ryan Lewandowski.

“The trail network helped us a lot because it’s existing infrastructure that the local residents are excited about using,” Lewandowski added.

“It got you out of your comfort zone,” said third-year graduate architecture student Tom Gibbons. “And the quick design process is great because you see how other people think, and how to make your idea stronger.”

Professor of architecture Betsy Roettger said that the competitive process will help students in the future, and noted that Geuze’s presence was beneficial.

“Professionals compete all the time, and having to complete a burst of work in a short period of time helps too,” Roettger said.

“The students were hesitant at first around Adriaan, but it was good to have someone from outside of our culture and our faculty shake things up,” Roettger added.

The Faculty Award went to a design titled The Greatest River on Earth, which featured a sideshow circus theme, replete with an arcade, promenade and spectacle sections.

Reclaiming the Rivanna won both the Student and Public awards. The design focused on enhancing the ecological experience the public would have with the river, including constructed wetlands, built and natural walking paths and mill buildings renovated as art studios.