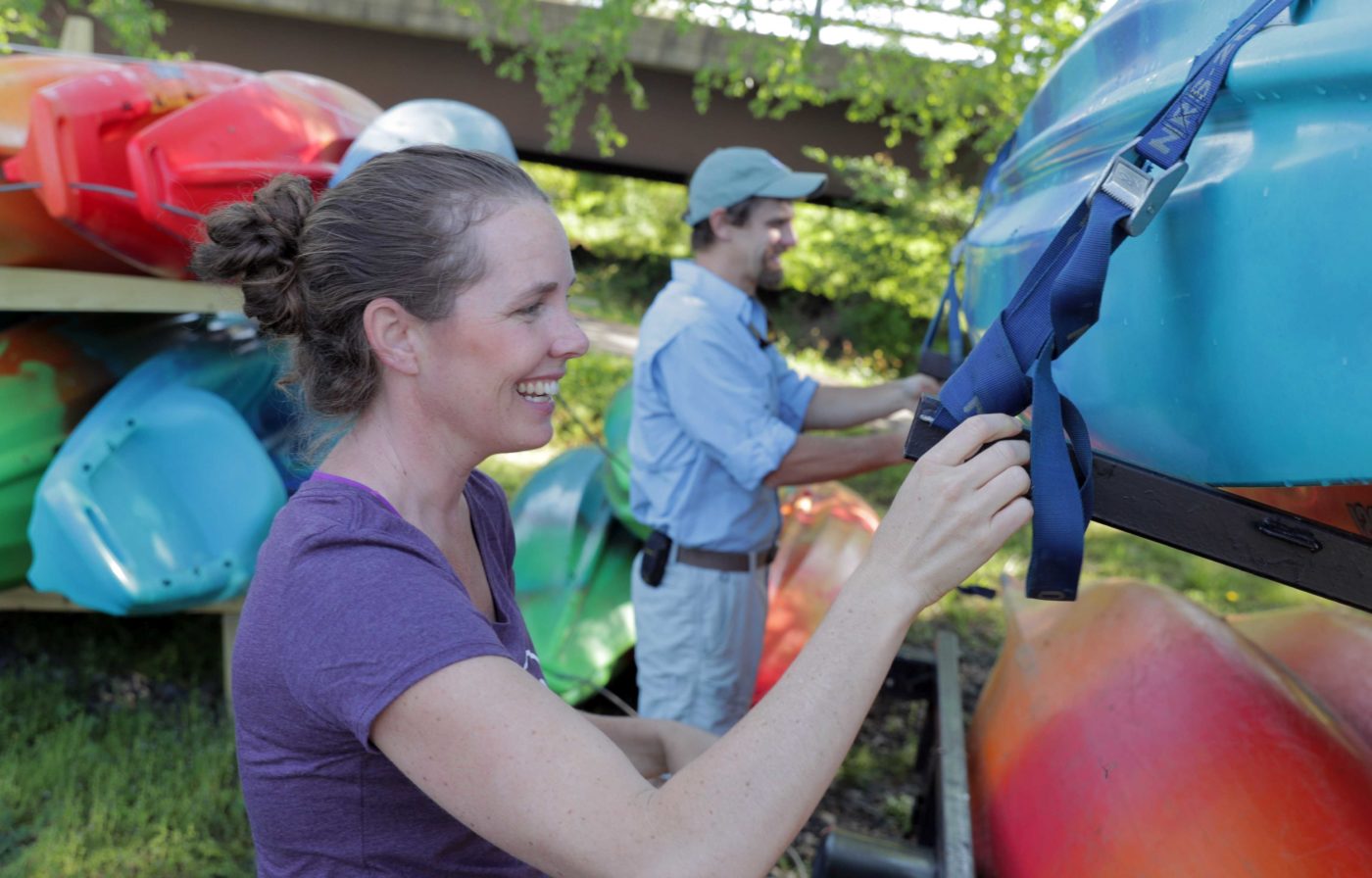 The seasonal Rivanna River Company has opened for the year on Pantops at High St. and Route 250. The company is a paddling outfitter that rents kayaks, canoes, stand-up paddleboards and tubes on the Rivanna River.

As Albemarle County and Charlottesville continue to plan ways to focus more attention on the Rivanna River, one company has begun a second season supplying kayaks, paddleboards and other ways for people to experience the waterway.

“Last year we were just juggling and figuring out a new thing,” said Gabe Silver of the Rivanna River Company. “This year we have some ground under our feet and have some great staff members who know the system.”

Some who live near the river have credited the Rivanna River Company and its owners, Gabe and Sonya Silver, for helping to draw residents to the river, long identified in local plans as an asset.

“Gabe and his wife Sonya at the Rivanna River Company have gotten over a thousand people out on the water, and their business is a huge step toward making the populace aware of the resource,” said Bill Emory, a resident of Charlottesville’s Woolen Mills neighborhood and long-time proponent of the river who has grown frustrated by a lack of action by the city and county.

“Last year, we were just juggling and figuring out a new thing,” Gabe Silver said. “This year, we have some ground under our feet and have some great staff members who know the system.”

The company’s opening weekend this year fell on Earth Day, and paddlers received a 75 percent discount if they cleaned up trash from the river. There is a lot more debris at the beginning of the season, Silver said.

“What you see is trash that washes off the city streets, that washes out of illegal dumps and it ends up in the river because the river is where everything goes,” Silver said. “My observation is that people that use the river do not trash it, and if anything, they clean it up.”

Silver said the company plans to do more educational outreach this year, as well as more instructional trips to show people how to handle a boat. They’re also settling in at their “shedquarters” at the corner of High Street and U.S. 250 in the parking lot of Cosner Brothers Body Shop.

“It was the one place where we could get good access to the river, where we could have a trip end and a trip begin,” Silver said. “The very best thing about being located there is that it’s on this busy hub of the Rivanna Trail. We had a constant stream of active, outdoorsy folks that we get to interact with.”

One six-mile journey begins at the new Berkmar Drive bridge below the South Fork Rivanna Reservoir on land where Albemarle County will put in a new access point to the river.

“Right now we access on private property that we lease,” Silver said.

The other six-mile trip goes from the outfitter to Milton, a location that illustrates how a private company can assist a locality that has to choose between competing priorities.

Earlier this month, Silver and some of his coworkers helped improve the access point at Milton. The county has said it lacks the budget or staff to do the carpentry required, so Silver did it.

“We also helped fund and provided the labor to [build] the new access ramp at Riverview Park,” Silver said. “We can help make those small steps and make them relatively quickly because we can act quickly and because we have the incentive to improve things on a short timescale.”

“The RCA brings the community to the river and its tributaries in a number of ways: paddles, cleanups, water quality monitoring, safety demonstrations, student education programs and workshops, river access construction and maintenance,” said Robbi Savage, the group’s executive director.

The RCA will hold a water quality monitoring demonstration at Riverview Park on May 23.

The Rivanna River Company helps the RCA with its twice-yearly Sojourns, which are intended to get people on the water. Savage said cooperation between the public, private and nonprofit sectors is working so far.

“We are seeing a huge increase in the number of families, students and youngsters coming to the river as a destination,” she said. “This is all a part of our overall strategy of ‘Turning Our Faces to the River’ through the Rivanna River Renaissance project we have underway with our conservation partners and local governments.

Albemarle and Charlottesville have made several gestures toward jointly planning future land-use decisions along the four miles where the river serves as their border.

The two localities agreed to develop a corridor plan after the Thomas Jefferson Planning District Commission used a $1 million grant from the U.S. Department of Housing and Urban Development to review their Comprehensive Plans.

The City Council and Board of Supervisors agreed in principle at a July 2014 meeting to devote more resources toward the issue.

Emory said not enough has been done.

“Then there was the Rivanna Renaissance committee, staffed by the TJPDC, composed of staff and elected officials from both jurisdictions,” Emory said. “There were [several] meetings, lots of excitement and a final report recommending next steps. And the legislative leaders do nothing, fund nothing.”

In Albemarle, an unspecified capital request for a Rivanna River Corridor Design Plan has been submitted each year since but has consistently ranked far below other county priorities such as improvements to schools.

In this budget cycle, the Charlottesville Planning Commission called for the City Council to “provide ample robust funding for broader planning initiatives underway,” including the River Renaissance. While the council did not directly set aside funds for that project, city and county contributions to the TJPDC allow that regional body to continue work on the plan.

The RCA will be the facilitator of a conference on the plan to be held this fall.

“It seems pretty clear that the Rivanna corridor is a place where there has been a lot more aspiration than actual movement,” Silver said. “There’s been a lot of planning but not a lot of doing.”

But as the region grows, Silver said more people are going to want to experience the river, and his company seeks to help them do so.

Silver said a steady stream of new residents and customers gives him the opportunity to talk about the watershed and how the land drains.

“If we don’t take care of the open space, nature, wildlife, drinking water quality and the views, we will kill the quality of life we have here and we’ll start going backwards,” he said.