Riverbend Development meets with neighborhood to discuss plans for Belmont 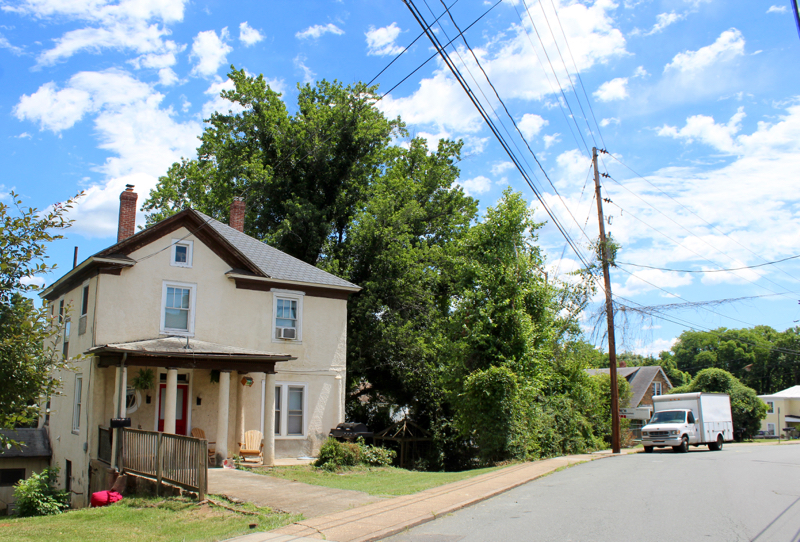 1003 Carlton sits on the edge of the property owned by Riverbend Development and may be used as a leasing office.

For the past decade, Riverbend Development has owned nearly 6 acres in the center of Charlottesville’s Belmont neighborhood. Now, the company is meeting with neighbors to start planning a mixed-use development that could include more than 100 apartments and numerous businesses.

“They seemed really open toward feedback,” said Seth Batton, secretary of the Belmont-Carlton Neighborhood Association. “They wanted to know what the neighboring parcels were hoping to see with this kind of development because, obviously, they’re trying to eliminate as much friction as possible.”

Riverbend Development is proposing a mix of one- and two-bedroom apartments and about 10,000 square feet of commercial space. The company is looking into obtaining a special-use permit to allow for higher density, but it has yet to decide if it will create affordable housing or instead make a contribution to the city’s affordable housing fund. Riverbend also has suggested leaving the house at 1003 Carlton Ave., the lot closest to downtown Belmont, intact and transforming it into a leasing office for the development.

The property, which is walking distance to downtown Belmont, is zoned Neighborhood Commercial Corridor, meaning that Riverbend has a lot of flexibility when it comes to types of development. The size of the land allows for 118 dwelling units by-right under NCC zoning, and 241 with a special-use permit. The developers also would be allowed to build offices, restaurants, convenience stores and retail up to 4,000 square feet. NCC zoning does not allow for hotels.

The 5.625 acres are made up of 17 different parcels, all of which Riverbend has owned for more than 10 years. Riverbend bought the first property in February 2006, then purchased another 15 in July 2006. The company acquired the last component of the current property in March 2007.

Many residents said they are concerned by a plan to construct two roads within the development that would connect to Carlton Road.

No traffic solutions have been proposed, but the developers are considering the addition of a pedestrian bridge over the railroad tracks on the north side of the property.

“The streets are narrow in this little neighborhood,” said Roger Tolle, a Belmont Lofts resident. “More traffic on the streets trying to get in and out at the beginning and the end of every day would put a strain on many of the little access crossroads.”

Riverbend is looking into solutions for the increased traffic flow and recognizes traffic as a significant problem that must be addressed.

“We understand that traffic is a concern for the neighborhood, and we are in the process of performing a detailed traffic study,” Riverbend President Alan Taylor wrote in an email. “This will provide knowledge and guidance to address this particular area of our proposal.”

Neighborhood leaders say they are open to the new development but would like the new facilities to fit into the area aesthetic. Resident liaison Shannon Connors emphasized the importance of consistent style.

“A lot of it was keeping in with the design of Belmont in general,” Connors said. “Taking into account the historic nature of Belmont was a big thing. Just not building something like City Walk in Belmont.”

Erin Hannegan, vice president of the neighborhood association, pointed out the diverse architecture in the neighborhood that still feels cohesive. Residents are most worried about losing sight of that ideal, Hannegan said.

“We don’t have a locally designated historic district at the moment, so it doesn’t require Board of Architectural Review approvals,” Hannegan said. “But I think there’s an eclecticism, a charm that comes with downtown Belmont, that isn’t necessarily historic and has a lot of modern designs.”

Another issue that arose during the meeting surrounded a piece of land, referred to as C2, that sits east of the Belmont Lofts. The landlocked park is owned by the city but maintained by Belmont Lofts. The developer will leave C2 to exist as a park and said the lot it swaps with the city will become a park, as well.

“While we are still working through the details, the end result will create two parks where none exist today — one on Fifth Street as a community trailhead, and the other, a pocket park, in the heart of Belmont,” Taylor wrote. “This will formally ensure that neither of these properties will ever be developed or built on in the future.”

The neighbors voiced other concerns at the meeting, held last month, including wildlife preservation, particularly in regards to a large frog population on the property; potential light pollution; and the strong negative feelings associated with the development of any more restaurants near downtown Belmont.

The neighborhood leaders expressed appreciation for Riverbend’s outreach. The firm took a similar approach with numerous neighborhood meetings during 2015 and 2016 for its Brookhill development in Albemarle County.

“[Riverbend Development] was clear they were going to stay connected with the neighborhood association,” Tolle said. “And we intend to keep a dialogue happening as things progress with plans for that development.”