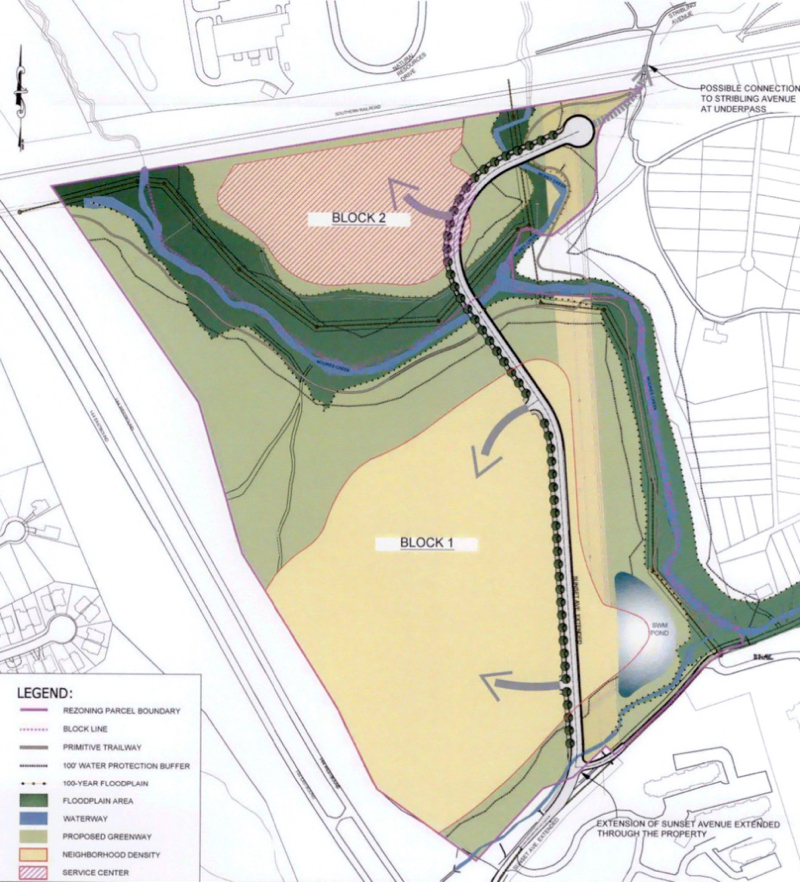 The June 2016 rezoning application proposes extending Sunset Avenue Extended and indicates a possible future connection to Stribling Avenue. The application has since been deferred and it is unknown if the property will actually be developed this way.

SECOND IN A SERIES

When it comes to conversations about connectivity in Albemarle County’s southern growth area, suggestions for reducing traffic on Old Lynchburg Road have included a road between the Redfields neighborhood and U.S. Route 29, and a connection between Sunset Avenue Extended and Fontaine Avenue.

A rezoning application submitted to the county last summer suggests the Sunset-Fontaine connector could be on the horizon, although plans for a new road out of Redfields remain conceptual.

Albemarle, Charlottesville and the University of Virginia have studied the Sunset-Fontaine connector for a number of years. A 2010 rezoning for an expansion of the Fontaine Research Park included a proffer for a part of the connection to be built on the eastern end of the property.

The county’s Southern and Western Urban Neighborhoods Master Plan, adopted in 2015, recommends a Sunset-Fontaine connector as a transportation improvement. Nevertheless, staff has recommended that it not be a priority in the near future because traffic modeling suggested it would have a limited impact on Old Lynchburg Road and increase the number of vehicles on Fontaine. One study estimated the connector could cost $30 million, a price that the master plan says may be too high for the potential benefits.

A road from Sunset Avenue Extended to Fontaine would likely link to Stribling Avenue, which currently connects the Fry’s Spring neighborhood to Fontaine through a one-lane underpass beneath the Norfolk Southern railroad.

In a recent interview about infrastructure projects in the southern urban area, Kevin McDermott, the county’s transportation engineer, said the connector would also require cooperation with landowners.

“I think it would be really hard for the county to acquire the right of way needed … and build the road, that’s a huge cost, so I think what we’d like to do is at least work with a future developer to make a connection that works within their needs and the county’s needs,” McDermott said.

Part of the Sunset-Fontaine connector is contingent on the future development of the Granger property, a 69-acre tract of land off Sunset Avenue Extended.

In June 2016, Alan Taylor, president of Riverbend Development, applied for rezoning of Granger property from R-1 residential zoning to a neighborhood model district zoning designation, which would allow for a mix of land uses and a higher density of development.

According to the development proposal, it could see up to 234 dwelling units and 100,000 square feet of non-residential space. The plan appears to extend Sunset Avenue Extended northward, stopping just short of a connection to Stribling Avenue south of the underpass.

Taking note of the $30 million price tag in the master plan, a description submitted with the proposed Granger rezoning suggests “the proposal avoids such high costs by providing the alternative for a future connection through the Norfolk Southern railroad underpass and a future connection to Stribling Avenue.”

It is unclear whether Riverbend Development currently plans to develop the property in this way. Taylor requested a deferral in July 2016 and the county granted a one-year extension of the deferral in June of this year.

A June 29 letter to Taylor from Andrew Gast-Bray, the county’s director of planning, indicated the deferral extension was requested due to negotiations with an adjoining land owner for access through their property.

Taylor did not return requests for comment on the previously submitted rezoning application.

A connection between Redfields and U.S. Route 29 has also been floated as a way to improve interconnectivity.

When the rezoning for a phase of Redfields was approved in 2001, one of the proffers dedicated right of way to the county on land between the subdivision and the nearby Sherwood Farms neighborhood. This land was designated for a connection from Cedarwood Court to Teel Lane, which would connect Redfields to 29.

“You need multiple points of ingress and egress in and out of neighborhoods,” said Rex Linville, co-chair of the 5th and Avon Community Advisory Committee and a Redfields resident who said he would be supportive of this connection. Currently, Redfields is only accessible via Sunset Avenue Extended.

“You’d have another way for people living in Redfields to leave the neighborhood and get out, and you’d lessen the pressure on Old Lynchburg Road,” Linville said.

Linville said he would expect some neighbors to oppose this. Sarah Mullen, who serves as president of the Redfields Community Association board, also said she would anticipate pushback from residents who have enjoyed the quiet of the neighborhood and don’t want traffic going past their homes.

McDermott said the county does not currently have plans to pursue that connection.

“I know that the neighborhoods are not too keen on getting the connection, but I really don’t think that the traffic through the neighborhoods would increase that much and I think connectivity is very important,” Palmer said. She emphasized that although she supports the concept, she would want to see a traffic study conducted and better understand the potential impacts on the residents.

Lowry also said he would want more information before fully endorsing the connection, but said it is worth considering the project before the proffer expires. He noted there could be public safety benefits of having an additional way to enter and exit the neighborhood.

“Having that access from Redfields down to 29 is highly valuable to the county and I’d hate to see it just disappear and go away,” Lowry said.