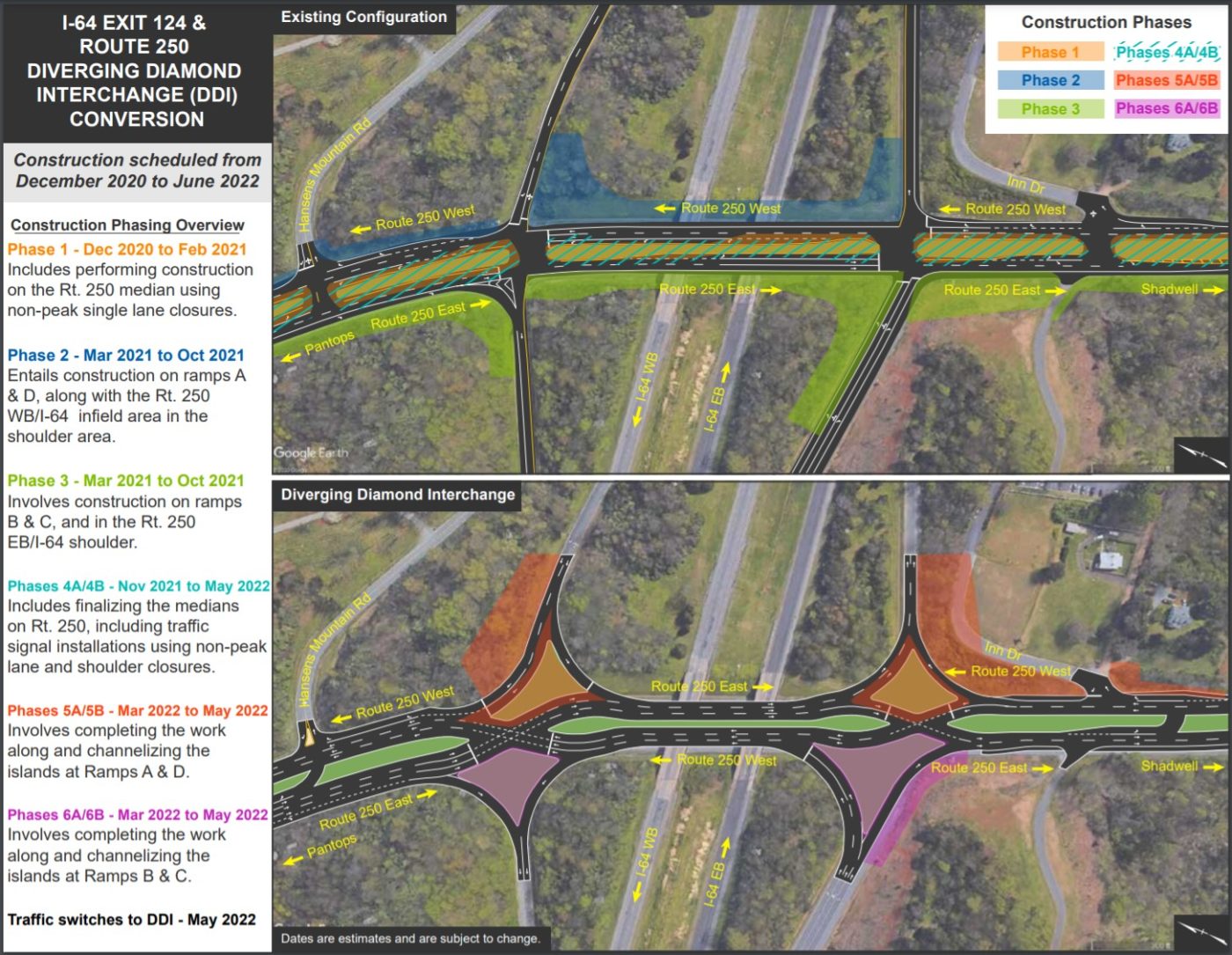 Commuters traveling near or utilizing the intersection at Interstate 64 and the U.S. 250 should be alert for road changes amidst construction for the next year, Virginia Department of Transportation officials say.

As part of a bundle of transportation projects in Albemarle County, which first received Smart Scale funding in 2019, the implementation of a diverging diamond road pattern at Exit 124 is underway and is expected to be completed by fall 2022.

The road project is in response to traffic congestion on Pantops. By reworking the roads into the diverging diamond design, it allows VDOT to address those concerns and enhance the safety of drivers who usually turn left across traffic to enter the interstate.

“That tends to be the least safe part of movements in intersections,” Kevin McDermott, a planning manager with Albemarle, said.

“Because 250 is such a busy road and the highway has an active interchange, this was the best option to get more vehicles through in a safe manner. That’s why that was chosen,” McDermott explained.

According to VDOT, a diverging diamond interchange is a type of design where traffic crosses to the other side of the road between freeway ramps and can be most helpful for congested roadways where a major route carries traffic between highways and smaller routes. The design allows cars to turn left onto and off freeway ramps without stopping or crossing the opposing lane of traffic.

McDermott said the new design will also streamline the traffic signals. There still would be two traffic signals, but they would allow for through traffic to switch sides.

“With less signal phases per light, it can process traffic faster that way.”

The design is also more cost-effective according to VDOT spokesperson Lou Hatter, due in part to it allowing enhancement to existing rights of way without having to add more infrastructure.

The state’s first use of a diverging diamond was utilized in 2014 at U.S. 15 and I-64 in Zion Crossroads. Both Hatter and McDermott note it has been successful in that area.

“Now there’s various places around the state [with diverging diamond intersections]. They are happening more and more,” Hatter said. “It doesn’t solve congestion problems, but it alleviates the congestion that we see at traditional diamond interchanges on roads that have had increasing traffic problems.”

As the construction progresses, lane closures will be limited to nighttime hours, but daytime traffic adjustments could be undertaken from time to time, Hatter said.

“Be alert for traffic control and directional signs,” Hatter cautioned. “Particularly for people who commute every day — you get used to the way things are, but be aware of changing traffic patterns.”

More information on this project, and the others bundled in the Smart Scale proposal, can be found here.