Robotics the rage for tech-minded students 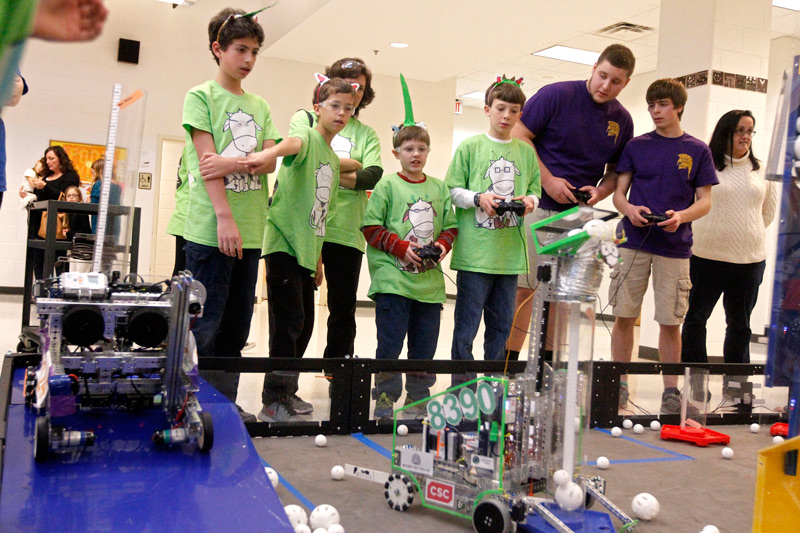 Henley Middle School students (green) look on as their robot navigates the course.

The event was the second year of a scrimmage to prepare for the FIRST Tech Challenge robotics competition, which will be held at the University of Virginia on Saturday. FIRST — For Inspiration and Recognition of Science and Technology — is a national program that encourages students to become leaders in the science and technology fields.

“The scrimmage offers many of the teams their first chance to work together and see the challenges that will be coming in upcoming tournaments over the next month,” said Bill Gardner, an electrical engineer and the day’s co-organizer. “This gives them time to practice and refine their robots and programs without the pressure of a tournament and parents and friends watching from the stands.”

A trend sweeping schools across the country, Gardner attributes the rise in student robotics to the FIRST organization and its emphasis on teamwork.

“Many of the traditional academic extracurriculars are largely based on individual performance or efforts — e.g., chess, math, science fairs, etc. — and giving the kids the task of working together in teams can be much more fun, challenging and social for the kids,” Gardner said.

This year, there are 10 robotics teams in Albemarle with three at each of the comprehensive high schools and one at Henley Middle School. Charlottesville High School and St. Anne’s-Belfield School also have teams.

Each team is mentored by volunteers.
“We have mentors who are on the faculty at the University of Virginia and UVa hospital, as well as engineers and computer programmers in the area, so the kids really get to talk to people in the field,” said Lynn Nichols, a math teacher at Monticello High School who also co-organized the event.
Gardner said that robotics offers students a chance to try something new while also reinforcing science curriculum.
“Robotics goes a long way to answering the ‘When am I ever going to use this?’ question that kids sometimes ask,” Gardner said.
During both driver-controlled and autonomous periods, Sunday’s practice saw 12 local teams attempting to use their robots to pick-up multi-sized whiffle balls and drop them into graduated cylinders of various heights that were located throughout the course.
The students designed and built the robots this fall. During the process, Nichols said, students are required to keep engineering notebooks.
“So they’re writing and designing and documenting the outreach that they do,” Nichols said, citing the various scientific lectures and programs — like TED Talks, astronomy nights and teaching younger learners — that the students attend.
Michelle Miles, a senior at Monticello, said she considered herself a “humanities only” person before Nichols invited her to participate in the school’s all girls robotics team.
“I didn’t know anything about robotics … and now I’m the team’s programmer,” Miles said, noting that Gardner took the time to teach her RobotC, a programming language.
“I’ve made good friends, and it’s been an eye-opening experience because I didn’t know that any of this existed,” she added.
Nathaniel Spitzley, a freshman at Albemarle High School, said he enjoys the challenge.
“The main draw is the satisfaction at the end when the robot is done and we see it work because oftentimes there are problems and you don’t see it work until the last day,” Spitzley said.
Shelby Bowen, a parent, coach and teacher at Greer Elementary School, said robotics hooked her child because it’s hands-on, creative problem-solving.
“It’s an authentic problem and it requires divergent thought,” Bowen said. “There are skills my son can apply here that are different than what he can apply in the general classroom.”
From year to year, Gardner said he enjoys watching the students solve the same problem multiple ways.
Nichols said that robotics represent the ideal classroom.
“It keeps me enthusiastic about teaching because at the end of the day there’s a group of kids who are excited to come in and apply math and science, and it gives kids that niche that they might not otherwise have in school,” Nichols said.
Saturday’s qualifying match for local students is scheduled to be held at the Slaughter Recreation Center at UVa. The public is encouraged to attend between 10:30 a.m. and noon, and between 1 and 5 p.m.