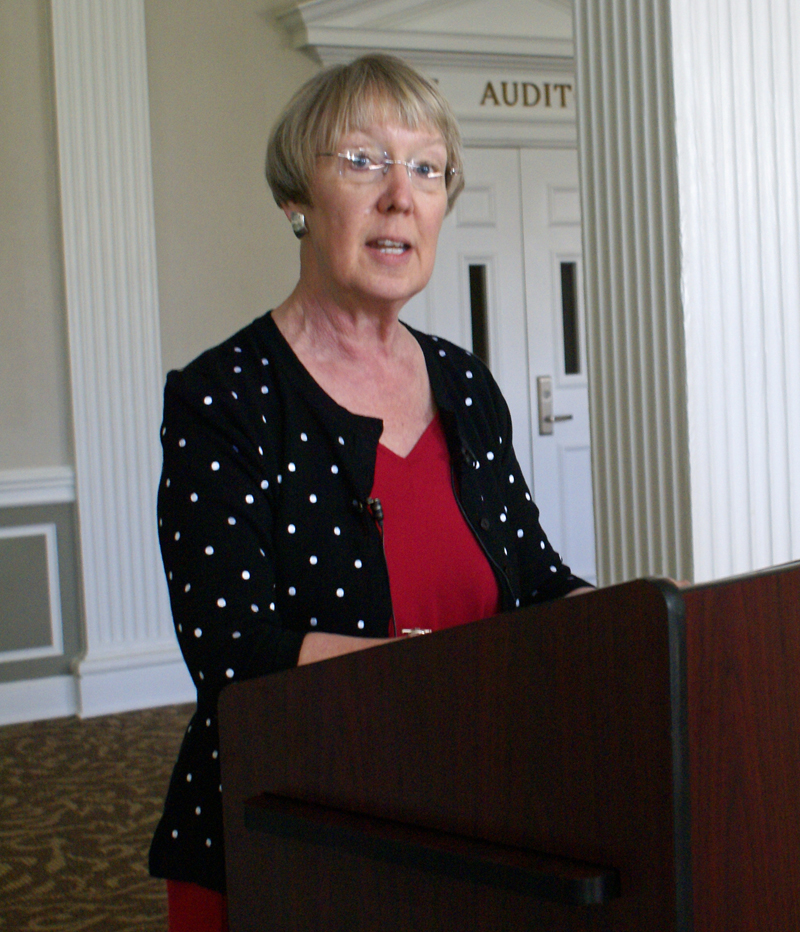 Moments later, Rooker endorsed a successor.
“I would not be comfortable doing this if there were not someone willing to run for this office whom I admire and with whom I have great confidence,” Rooker said. “That person is Diantha McKeel.”
Currently, McKeel is serving in her fourth term as the Jack Jouett representative on the Albemarle County School Board.
“Over the years, I have appreciated Mr. Rooker’s outreach to me and our ability to partner in the work of making Albemarle County a great place to live, work and educate our children,” McKeel said at a press conference soon shortly after Rooker’s statement.
Rooker won his first supervisor election in 2001 after four years on the planning commission.
Before declaring his intentions, Rooker read a long list of accomplishments made by Albemarle County during his tenure, including the development of master plans for its growth areas.
Other achievements included the passage of an ordinance to control the aesthetics of cell towers and construction of the Meadow Creek Parkway.
“About 20 percent of the county is now in parkland or conservation easement, and about 75 percent of the county is still in forest cover,” Rooker said.
McKeel said she would continue Rooker’s legacy if elected.
“I will focus my efforts on natural resource preservation and environmental protection, transportation and traffic improvements that make sense … unlike the proposed Western Bypass,” McKeel said.
McKeel, who turns 63 this month, was first elected to represent the Jack Jouett district on the Albemarle School Board in 1997 and was re-elected to three terms. She ran unopposed in 2005 and 2009.
McKeel has made financial contributions to Democratic candidates in the past, but said she follow would Rooker’s example and run as an independent.
“We run as independents on the School Board, and I found that frees you up from the constraints of having to represent a particular party’s views,” McKeel said. “I agree with some of the things Republicans do, and I agree with some of the things Democrats do.”
McKeel said Rooker phoned her as soon as he had made up his mind whether to seek a fourth term.
“I just assumed he would be running again, but this is an opportunity to take my experience to the next level,” McKeel said.
McKeel graduated from Bridgewater College with a degree in sociology and early childhood education. She also received a nursing certificate from the University of Virginia, and she has worked for the health system since 1976.
McKeel has also served on the Charlottesville-Albemarle Technical Education Center’s board of directors and as president of the Canterbury Hills Neighborhood Association.
Rooker had a campaign fund of $67,547 at the end of 2009, according to the Virginia Public Access Project. He said in an interview that he had not decided what to do with the money.
Rooker’s retirement means there will be at least one new member of the Board of Supervisors at the beginning of 2014.
Republican Supervisor Duane E. Snow is seeking a second term to represent the Samuel Miller district, and Republican Supervisor Rodney Thomas is running for a second term for the Rio district.
So far, no Democrats or independents have announced they will challenge either Republican.
The deadline to file for office as an independent is June 11.
Republicans will officially nominate Snow and Thomas at a mass meeting later this year.
Albemarle Democrats will also have a caucus because the deadline to notify intentions to hold a primary has already passed, according to county registrar Jake Washburne.