Roundabout coming to U.S. 250 near Crozet 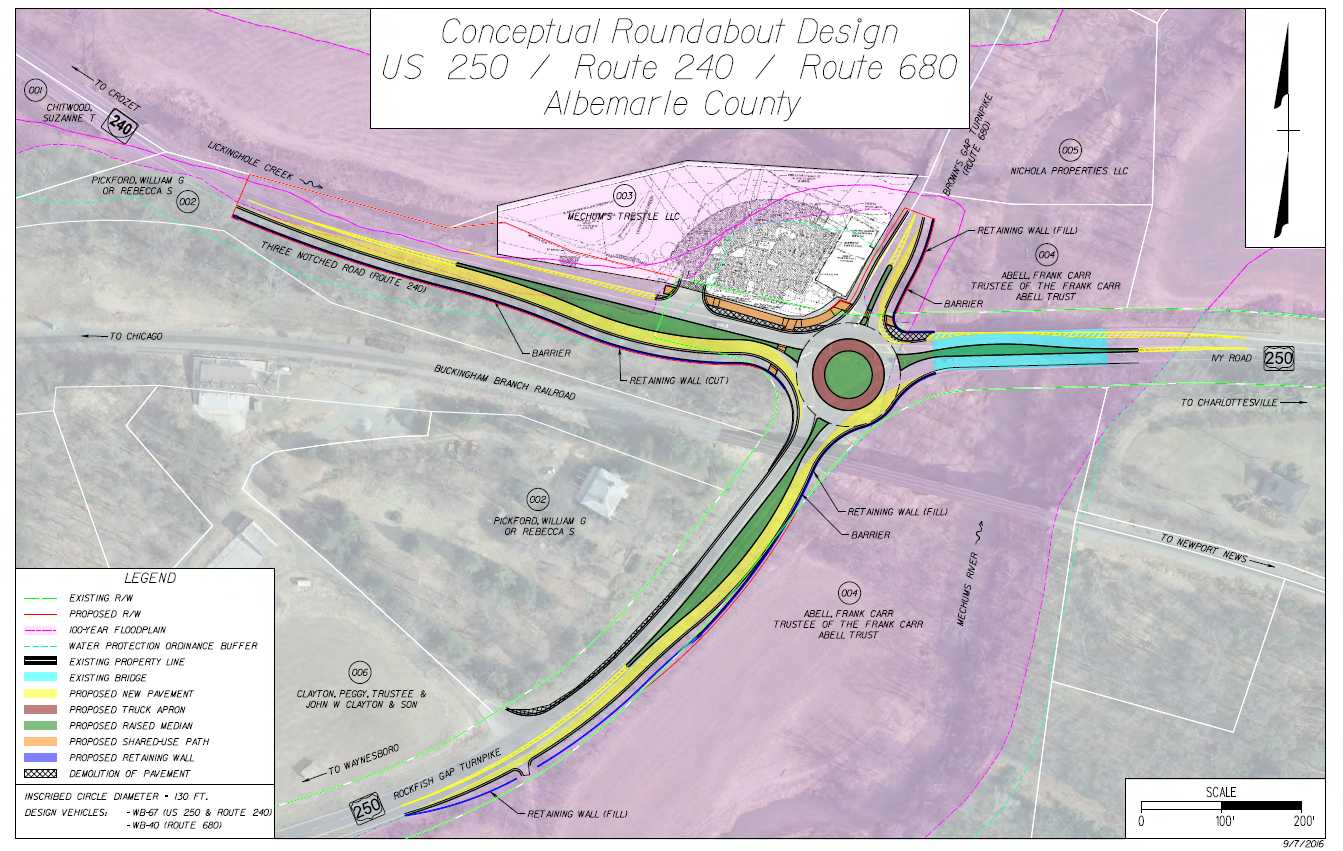 Conceptual drawing for roundabout at Route 240 and U.S. Route 250

Albemarle supervisors were briefed on several transportation projects Wednesday, including the news that a roundabout will be coming to the intersection of U.S. 250 and Route 240, east of Crozet and near the Mechums River bridge and railroad trestle.

“It did not get funded through the SmartScale process,” said Joel DeNunzio, administrator of the Virginia Department of Transportation’s Charlottesville residency. “But we got an opportunity to re-do the [Highway Safety Improvement Funding application], and it looks like, as of today, we have been notified we have the funding.”

DeNunzio said the planning work can get underway in the next fiscal year.

“We are going to try to keep our momentum going with great ahead-of-time and under-budget construction,” he said. “We want to find better and more ways to execute projects more cheaply and more efficiently.”

DeNunzio said construction of Berkmar Drive Extended and the widening of U.S. 29 should be completed by June. Those projects are part of the Route 29 Solutions package that was funded following the demise of the Western Bypass.

Five projects in Albemarle did qualify through VDOT’s SmartScale process, including a “divergent diamond” at Exit 129 on Interstate 64, as well as a roundabout for the intersection of Route 151 and U.S. 250.

Crews are installing a temporary traffic light there in the meantime.

“We are expecting that to be in operation on April 28,” DeNunzio said.

Supervisors also agreed to transfer $2.3 million in surplus funds to three sidewalk projects in the region. The funding is left over from the John W. Warner Parkway, Jarmans Gap Road and a project to synchronize traffic lights on U.S. 29.

Staff recommended spending $300,000 on sidewalks at Hydraulic Road and Barracks Road, $1.27 million on a sidewalk on a portion of Ivy Road and $755,897 for a sidewalk on State Farm Boulevard.

The Hydraulic project is currently over budget due to anticipated increases in construction costs. The Ivy Road project could go to bid in January 2019. There is no date for when the State Farm Boulevard might be ready to proceed.

Supervisor Brad Sheffield was the lone vote against the transfer due to a concern that the money would be better spent on other higher priority projects.

Supervisors also were briefed on progress toward new priorities in the six-year improvement secondary road plan.

“That process allocates funding for construction, maintenance and improvements in the state’s secondary system,” said David Benish, the county’s chief of planning.

Albemarle will receive about $850,000 in funding for secondary roads in the next fiscal year, but most of that money will go toward paving roads.

“In Albemarle County, the preference is to utilize the rural-rustic road construction design to pave unpaved roads because of the flexibility and costs,” Benish said. “This minimizes impacts to the rural character.”

The next roads on the paving list are Preddy Creek Road, Keswick Drive and Patterson Mill Road. Paving of Doctor’s Crossing Road was completed this year, and paving of Bunker Hill Road is still underway.

Benish said staff is recommending that a project to pave Dick Woods Road from Route 151 to the Nelson County border be moved up because VDOT already has been working to address drainage and erosion issues.

“The road is in such a condition now where it’s pretty much prepped to be paved,” Benish said. “If we wait too long until 2021, the [VDOT] work would have to be done again.”

A plan to pave Rio Mills Road to serve as a connector road to Berkmar Drive Extended will be the beneficiary of “telefee funds” collected by VDOT from utility companies that build in state right-of-way. Albemarle also has applied for additional funding through the state’s SmartScale funding mechanism.

“Next year we will have a little bit more of a revised plan of how to deal with all the funding opportunities for that project,” Benish said.

Supervisor Ann H. Mallek asked that Ballard Mills Road, Sugar Ridge Road, Decca Lane and Wesley Chapel be removed from the list of unpaved roads, even though there is no funding for those projects.

“There are many people in the White Hall District who see paving a road as a de facto rezoning for higher density,” Mallek said.

Supervisors will hold a public hearing on the priorities on June 7.

“This year’s theme is ‘work zone safety is in your hands,’” DeNunzio said. “Not only is it VDOT and our contractors’ responsibility to be safe in work zones, but it is also the traveling public’s responsibility to help us be safe.”

DeNunzio said driving must be the only priority when people are operating their vehicles.