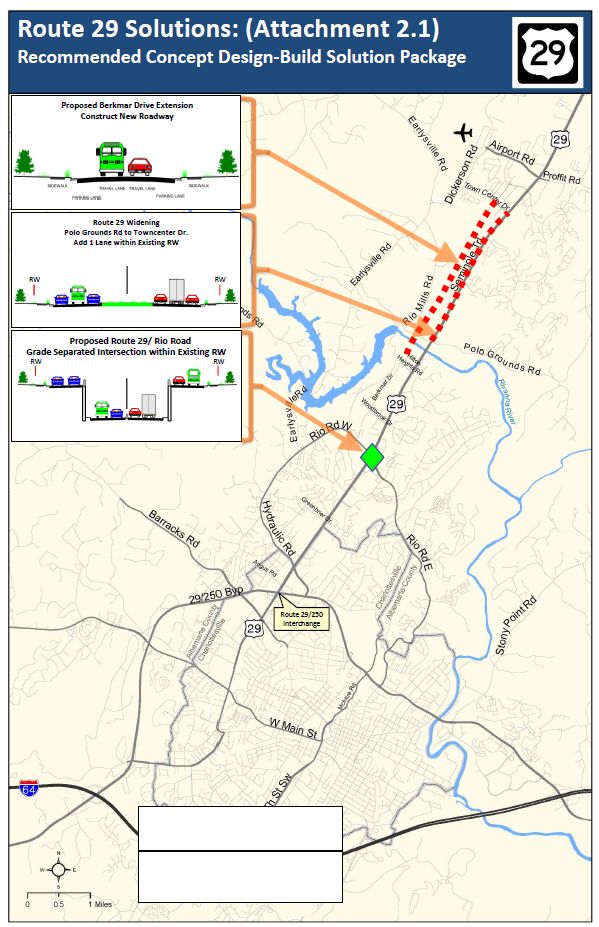 Map depicting the three projects called for in the RFQ

It is increasingly clear that VDOT’s treatment for congestion on the U.S. 29 corridor is going to involve an intense shock to the local transportation system.

VDOT has set a goal of completing a new grade-separated interchange at Rio Rd by summer 2016.  That will be quickly followed by the completion of two parallel roads by late 2017, one of which will cross the Rivanna River on a new bridge.

Philip Shucet, the leader of the Route 29 Project Delivery Advisory Panel, said Thursday he hopes the green light will be given for the contractor to begin work in early March 2015.

Many on the panel expressed concern that all three projects will be under construction at the same time. Shucet confirmed that would be the case.

“Does that mean Rio would get done before parallel roads? That’s a yes,” Shucet told the panel. “No reason to make any bones about that. The incentive is directed on building Rio first.”

Shucet said contractor will be penalized financially if the deadline for all projects to be completed by October 2017 is not met.

An “accelerated early incentive” will be granted if the project is completed by July 1, 2016.

“There are a lot of wheels turning real fast to keep this project moving forward,” Shucet said.

Shucet, a former commissioner of the Virginia Department of Transportation, was  hired by Governor Terry McAuliffe earlier this year to recommend alternatives when the Western Bypass of U.S. 29 lost local, state and federal support.

VDOT has begun asking engineering firms to demonstrate they have the ability, expertise, and track record to design and build the $51 million widening of U.S. 29 from Polo Grounds Road to Hollymead Town Center, the $54 million extension of Berkmar Drive to Hollymead Town Center, and a $81 million grade-separated intersection of Rio Road and U.S. 29.

“The objective of the project is to increase capacity and mobility, improve safety and improve operational deficiencies along the U.S. Route 29 corridor while at the same time minimizing impact during construction to the traveling public, local residences and businesses,” reads the objective of the request for qualifications.

“Maintenance of traffic and accessibility to local businesses during construction will be a significant consideration for the successful delivery of this Project,” it continues.

The request for qualifications was issued shortly after the second meeting of the Route 29 Project Delivery Advisory Panel, a group convened by VDOT and Shucet to oversee implementation of the three projects, as well as several other projects which will not be part of this contract.

The three projects must be completed by the October 2017 and the request offers incentives to complete the projects early, though does not quantify how much money would be paid to the contractor in that event.

Shucet said construction work within the footprint of the existing Rio Road intersection can only be performed in the summer months, between the University of Virginia’s graduation and the first home football game.

Would-be contractors will need to demonstrate experience they’ve had building projects in urban corridors. The top three firms who respond to the request for qualifications will be invited to submit a bid for the entire project.

An information meeting for contractors will be held July 31.  Responses to the request for qualifications are due August 28 and the top three teams will be notified September 25.

The request for proposals process will be conducted throughout the fall. The winning proposal will be announced at the Commonwealth Transportation Board meeting in January and the contract will be awarded the following month.

One panelist wanted to know when the public would have the chance to see preliminary drawings that outline the scope of each project.

“I am anxious to see the conceptual as early as possible to really get the idea in detail of what’s coming,” said Henry Weinschenk, a business owner on U.S. 29.

Shucet said VDOT has three teams of engineers working on the preliminary engineering for each project. He added the public will have an opportunity to give their input on the preliminary designs, but it was unclear if that would happen before the request for proposals is published.

Last month, the Commonwealth Transportation also approved $10 million to study a grade-separated interchange at Hydraulic Road and $10 million for an southern extension of Hillsdale Drive that is currently expected to terminate at Holiday Drive.

At the request of the Charlottesville City Council, preliminary engineering for both projects will be conducted at the same time. That will not likely occur until work is completed on the first phase of the Route 29 solutions package, which will also include the so-called Best Buy ramp and completion of the northern portion of Hillsdale Drive Extended between Whole Foods and the Senior Center.

“I think that’s a real good move and makes a lot of sense because I think that whenever it gets kicked off, the [preliminary engineering] study at Hydraulic is going to, by necessity, look at 250 and 29 and that would be the time to look at this possible connection onto Hillsdale South,” Shucet said.

The panel’s next meeting will be August 7 at the Virginia Center for Transportation Innovation and Research beginning at 2 p.m.

Meanwhile, VDOT is conducting work on technical studies would-be contractors will need to complete their bid.

This week, VDOT crews have conducted a cultural resources and wetlands surveys for Berkmar Drive Extended. Of the three projects, Berkmar has the most potential to encounter obstacles because it will be built on currently undeveloped land.

VDOT is hoping to persuade that the Federal Highway Administration that no major environmental approvals are needed to complete the widening project and the new Rio Road interchange. However, VDOT is pursuing a preliminary environmental inventory for Berkmar.