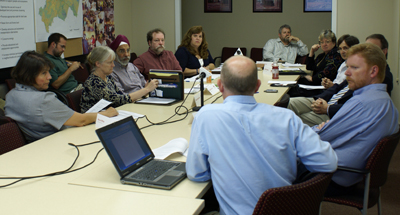 On May 14, 2009, the working group overseeing the creation of a
Regional Transit Authority (RTA) met to discuss its next steps for the
Charlottesville and Albemarle County project to form and fund a new
entity expanding public transit options in the community.  Consensus
was reached to have staff of the Thomas Jefferson Planning District
Commission (TJPDC) prepare recommendations on RTA governance issues and
to draft a budget to retain a consultant to guide the RTA’s formation
and system design.  The resulting project plan will then be brought
back to local officials for further consideration.


Local leaders received both good news and bad news in the 2009 General Assembly session.  While legislators easily granted authority for the creation of an RTA, they withheld permission for local governments to hold a voter referendum on a potential sales tax increase that would fund the cooperative venture.

to jointly pursue a Regional Transit Authority which would take over and expand the operations of the Charlottesville Transit Service (CTS).  In August 2008, the RTA Work Group was formed to develop legislative proposals to secure the blessing of the General Assembly in 2009.  The University of Virginia, while a participant in the meetings and a major operator of local bus service, has consistently stated it did not intend to join the RTA.

At the one-hour meeting earlier this month, the general mood of the RTA Work Group was one of disappointment with the General Assembly, a belief that there would be a public backlash against inadequate funding for the state’s transportation needs, and an expressed desire to elect representatives at the state level who would address transportation.  Four of five members of Charlottesville City Council came to the meeting and they were joined by Supervisors Dennis Rooker (Jack Jouett) and David Slutzky (Rio).

Take no action (in the absence of a funding mechanism).

Form the RTA to demonstrate serious intent to General Assembly.

Supervisor Dennis Rooker (Jack Jouett) said that half of the counties comparable to Albemarle in Virginia have established service districts to raise local revenues.  Rooker said, however, that he favored letting the “dire funding situation” in Richmond play out before implementing new local taxes.

“Basically the state has no money for construction, no money for anything in transportation…and they are barely meeting the minimum necessary to obtain federal [matching funds],” said Rooker. “I think we need to let what’s happening in Richmond play out a little bit because, I think that given these most recent cuts, there is going to be a big public backlash at some point soon.”

The officials debated whether the community would benefit from an incremental or comprehensive approach to a new public transit system.  They assessed the cost vs. benefits of Charlottesville transitioning control of CTS to the new Authority.  They concluded by asking TJPDC staff to develop a proposal and budget for the RTA’s governance and formation.

13:15 — Slutzky describes funding options with a service district and shares his calculations on potential revenue

24:58 — Slutzky asks group to consider next steps for RTA formation

36:45 – Councilor Satyendra Huja indicates desire to radically restructure public transit but questions why City would want to give up control of Charlottesville Transit Service (CTS)

51:06 — Bill Watterson, CTS, describes current costs of public transit and states the costs will be greater with RTA, for no increase in service, if the RTA takes on the in-kind contributions of about $400,000 provided today by Charlottesville

55:16 — Slutzky describes next steps to be taken by TJPDC staff to develop a proposal and budget for RTA governance and formation