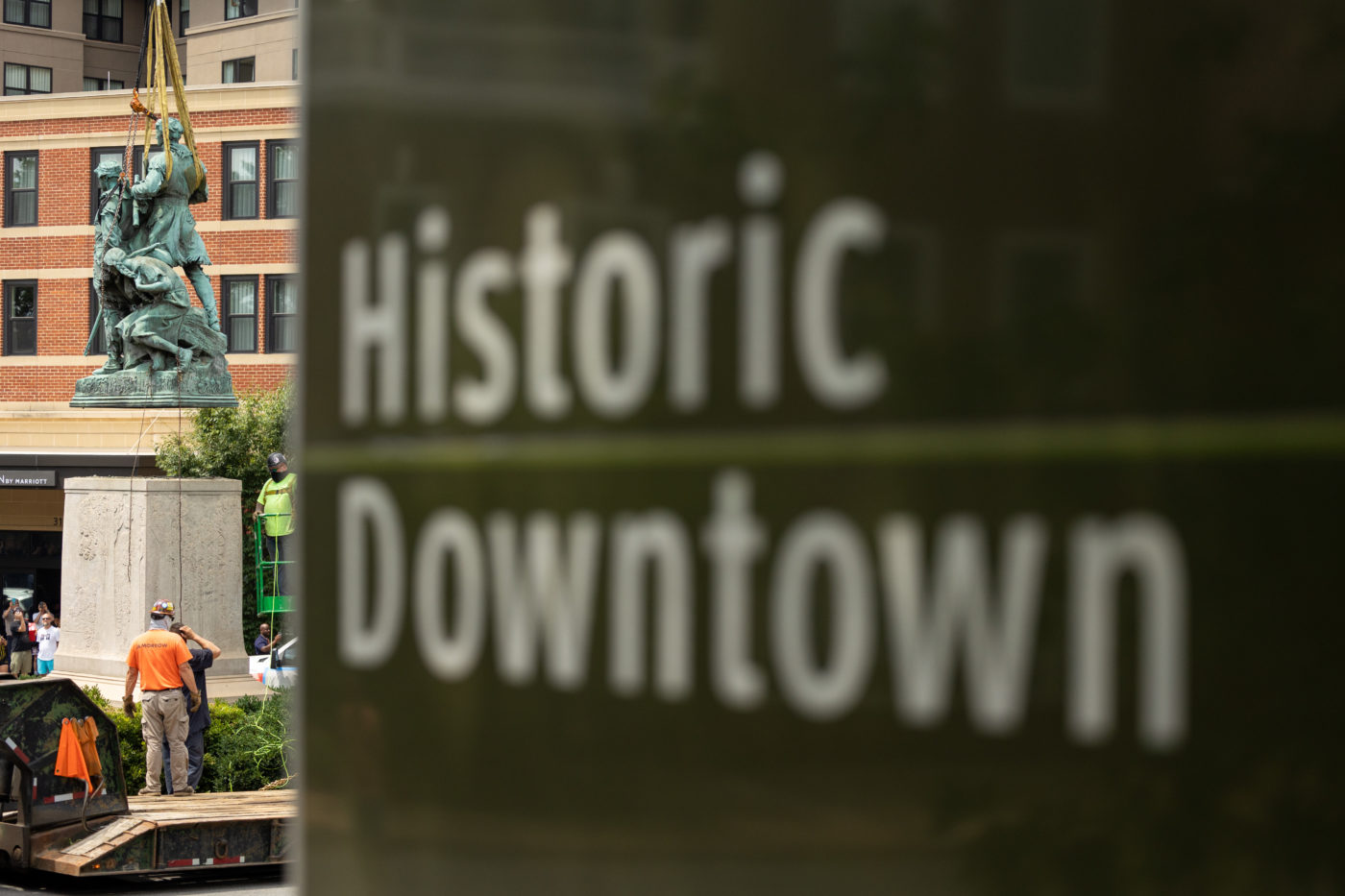 After more than 100 years, the Sacajawea, Lewis, and Clark statue is removed. Previously, the descendants of Sacajawea expressed distaste in how their ancestor is represented-- cowering beneath Lewis and Clark.

As the crowd dissipated from Court Square, where people witnessed the removal of the Confederate Gen. Thomas “Stonewall” Jackson monument and — earlier in the morning — fellow Confederate Gen. Robert E. Lee, the Charlottesville City Council convened virtually in an emergency meeting on Zoom. The reason was to announce the relocation of the Sacajawea, Lewis and Clark monument from the intersection of West Main and Ridge streets.

Team Henry Enterprises LLC, the contractors who were still in town after removing the Confederate monuments, had a lunch break before getting to work Saturday afternoon on the monument to the explorers.

In November 2019, the council held a work session with descendants of Sacajawea present to discuss the future of the monument — locals and Sacajawea’s descendants had expressed displeasure with her depiction among the men she led an expedition with.

While Meriwether Lewis and William Clark stand tall, their travel companion and guide, Sacajawea of the Shoshone tribe, cowers beneath them in the bronze representation of the trio.

In the early 1800s, the group had traversed the country after the United State purchased land from France. Then-President Thomas Jefferson commissioned the expedition headed by fellow Albemarle native Lewis and Clark, also of Virginia.

Calling it the “worst representation” she has seen of her ancestor, Rose Abrahamson also noted that the statue was erected in 1919. This was also around the same time that Charlottesville’s Confederate monuments were put up by the same benefactor, Paul Goodloe McIntire. 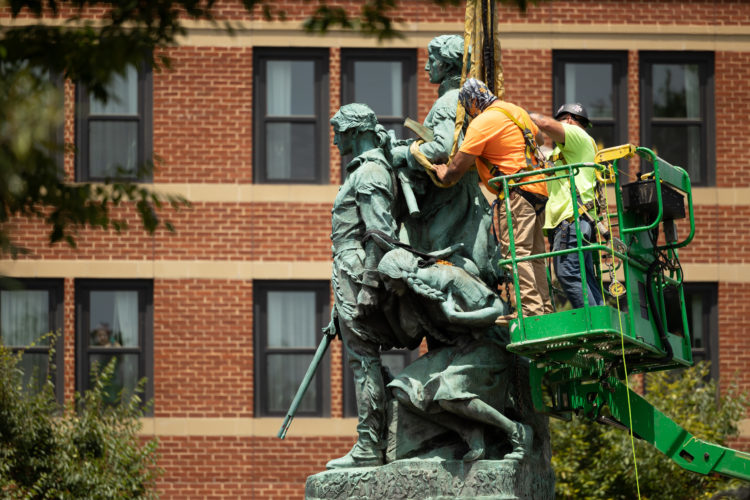 Contractors prepare the statue for removal on July 10, 2021.

Flash forward to a Zoom meeting in 2021, where the council consulted with Abrahamson and Exploratory Center Executive Director Alexandria Searls.

In 2019, the center had expressed interest in taking the statue, and now in 2021, they plan to work with Sacajawea’s descendants and other Indigenous groups to contextualize it in the new setting.

“Our hope is to involve the Native American Student Alliance at [the University of Virginia] and have interpreters from their group and other groups to really have buy-in from many different people,” Searls explained. “The way Shoshone would like the statue interpreted is of paramount importance.”

Abrahamson supported the idea to relocate the statue to the center, despite also wishing it to be destroyed.

“As far as I’m concerned, it was a very offensive statue. Not only did it delineate me as a Native American but it delineated women and our role in society,” Abrahamson explained. “In my personal opinion I feel it should just be melted down … but if it can be utilized to give a greater message to educate the public, that would be an opportunity. So I am very pleased with what is taking place.”

Should the statue ultimately be placed within the Exploratory Center, Searls noted that it can be part of education on missing or murdered indigenous women. Additionally, with it no longer sitting in a public space lacking context, Abrahamson said, the statue can take on a more nuanced meaning.

Though the City Council appropriated funding last week to cover the removal of the statue in addition to that of Jackson and Lee, Councilor Michael Payne says they hadn’t intended to remove this one today.

“Our original expectation in terms of cost and time was that [Team Henry Enterprises LLC] would be able to do Jackson and Lee,” Payne said. “They got finished early, and we became aware that they could move [Sacajawea, Lewis and Clark] as well at no additional cost to the city.”

The reasoning for the sudden meeting, he adds, was a technicality that had to happen in order to expedite their plans.

According to city spokesperson, Brian Wheeler, the statue is being placed at Darden Towe Park where it can eventually become part of the Lewis and Clark Exploratory Center.