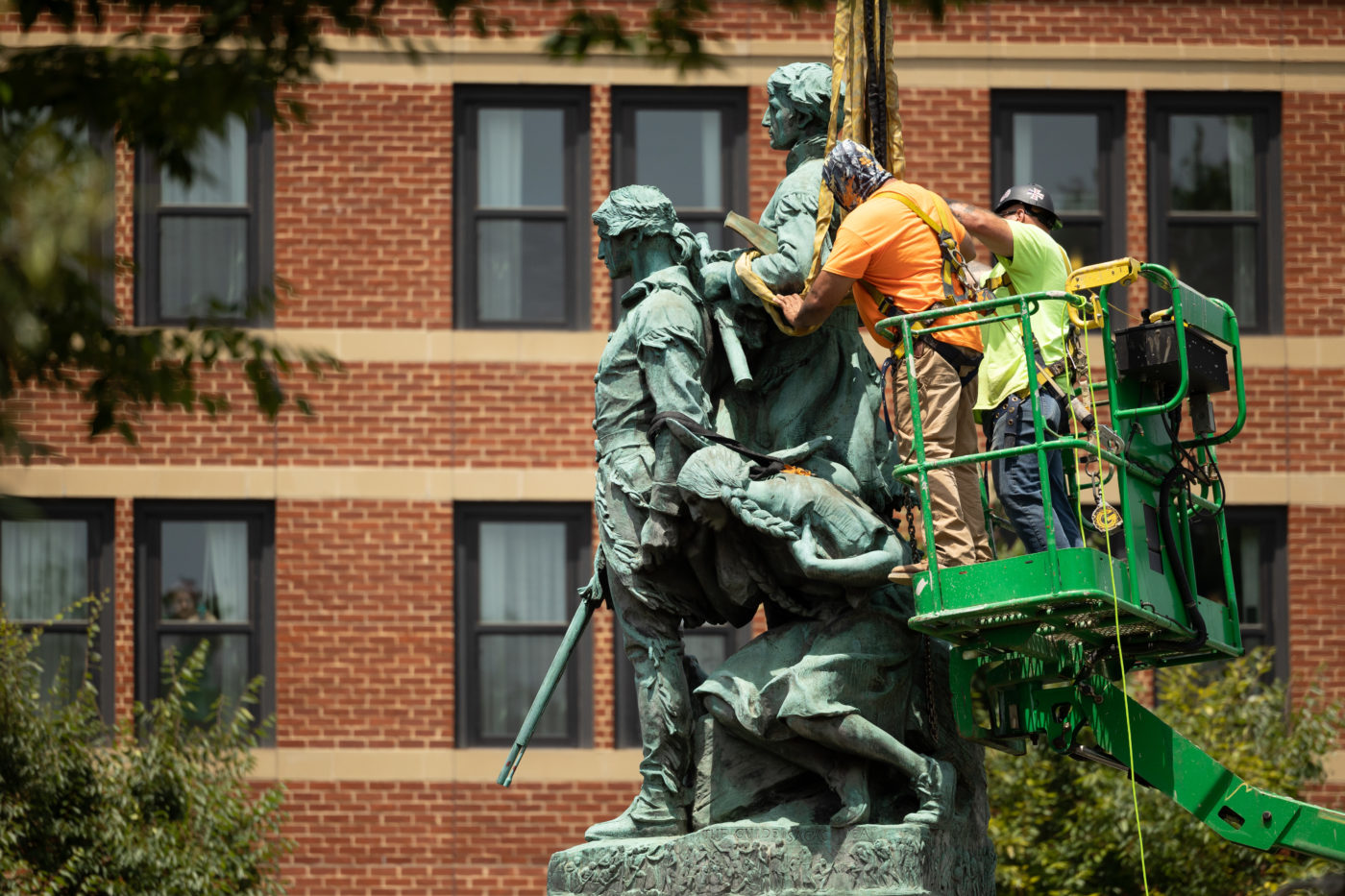 Contractors work to remove the Sacajawea, Lewis, and Clark statue from West Main Street in Charlottesville on July 10, 2021.

The Lewis and Clark Exploratory Center’s proposal to take the city’s statue of explorers Sacajawea, Merriweather Lewis and William Clark seemed a done deal at Monday’s Council meeting. But a hiccup emerged when Sacajawea’s descendants requested they be granted indefinite control over the statue.

Rose Ann Abrahamson – a descendant of Sacajawea – tried to amend the proposal earlier this month. In an email, she outlined that descendants would have shared ownership of the statue and that the statue could not be sold for profit.

It added that “familiar descendants should have the right to maintain, control, and protect their cultural heritage, traditional knowledge and traditional cultural expressions of their ancestor’s image.”

“I think it should be understandable why we fight so hard, because the statue was disparaging and contains the image of my great-great-great aunt, Sacajawea,” Abrahamson told Charlottesville Tomorrow. “To protect her true-life history, and her legacy is part and parcel to our sovereignty. Who best to speak for our own than us? How is it justified that any other group speaks over us or on her behalf?”

It’s a reasonable request, the center’s director said. But she needs time to determine if that is something the organization can legally grant.

LCEC executive director, Alexandria Searls, voiced her concern at the meeting – telling Abrahamson “we want you to have a say on where it goes. But because of our bindings with the IRS and our incorporation, we’d have to make sure that the language was absolutely right and that could take months.”

Stating she was “shocked by the twist” Abrahamson explained that it was important for her family to have “generational authority” over where the statue goes should it leave LCEC’s custody or should the organization ever dissolve.

Searls explained in an interview with Charlottesville Tomorrow the next morning that the sudden misunderstanding was legal and bureaucratic in nature.

“The proposal I sent with [LCEC] board approval was already legally actionable as an answer to the [Request for Proposal]. Then all of the sudden these extra things were added,” she said. “The IRS requires when you dissolve, that it goes to a very similar organization. I couldn’t promise as a nonprofit that [Sacajawea descendants] would exactly get to say where it went if we dissolved.”

The descendents’ decided to request greater control of the statue following a Dec. 6 Council meeting.

Abrahamson and members of the local Monacan tribe along with Searls had been in touch virtually where she felt they “were all on the same page.” Though Sacajawea was not Monacan, the local tribe occupied Charlottesville-area land and has been involved in discussions about the Sacajawea statue.

“We had all shared our concerns about the statue’s placement, and how it was to be exhibited,” she said. “We also wanted to have a constant voice and input in the statue’s treatment, management, and exhibit. We believe this would waylay any misinterpretation or disparagement of our ancestor or further harm to the Indigenous community, especially young women.”

According to Abrahamson, when she received the proposal Searls had written, it was noted that an amendment could be added. So, Abrahamson said, she “went to work on it” incorporating input from indigenous groups and people who have been supportive of the statue for the past two decades.

While the current deliberations play out, the idea of LCEC as a steward of the statue began to take shape in 2019. When Abrahamson and members of her family visited Charlottesville in November of that year, they hosted a smudging ceremony and attended a City Council work session where Council resolved that the statue should be moved. Abrahamson and other descendants also visited LCEC and had dinner with Searls. 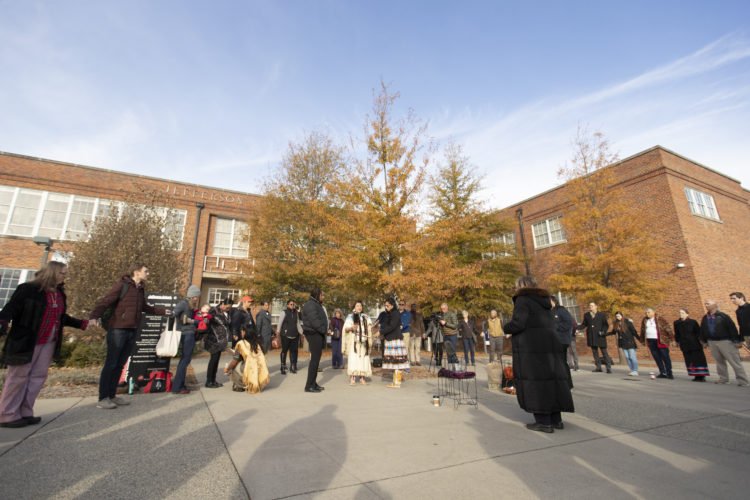 Descendants of Sacajawea lead a smudging ceremony in Charlottesville in Nov. 2019.

Flash forward to July 2021, the monument was be removed and stored near LCEC in Dowden Towe Park.

At the time, Abrahamson and Searls noted interest in contextualizing the statue within its museum – and using the exhibit to draw attention to missing and murdered indigenous women across America. The idea later took more shape in LCEC’s proposal that was set to be voted on at the Dec. 20 meeting.

On next steps, Searls said that she contacted the tribe after the meeting and that once holidays have passed, work will begin to revamp a proposal with language all parties can agree to.

“With the holidays right now, we’re all going to take a break from it for a little while,” Searls said. “We’ve reached out to each other and we’re going to move forward and figure this out.”

Meanwhile, Abrahamson feels hopeful agreements can be made and sees the positive in having more time to reach them.

“It is good that we will have time to discuss further with the center and can hopefully come to a good agreement,” Abrahamson said.